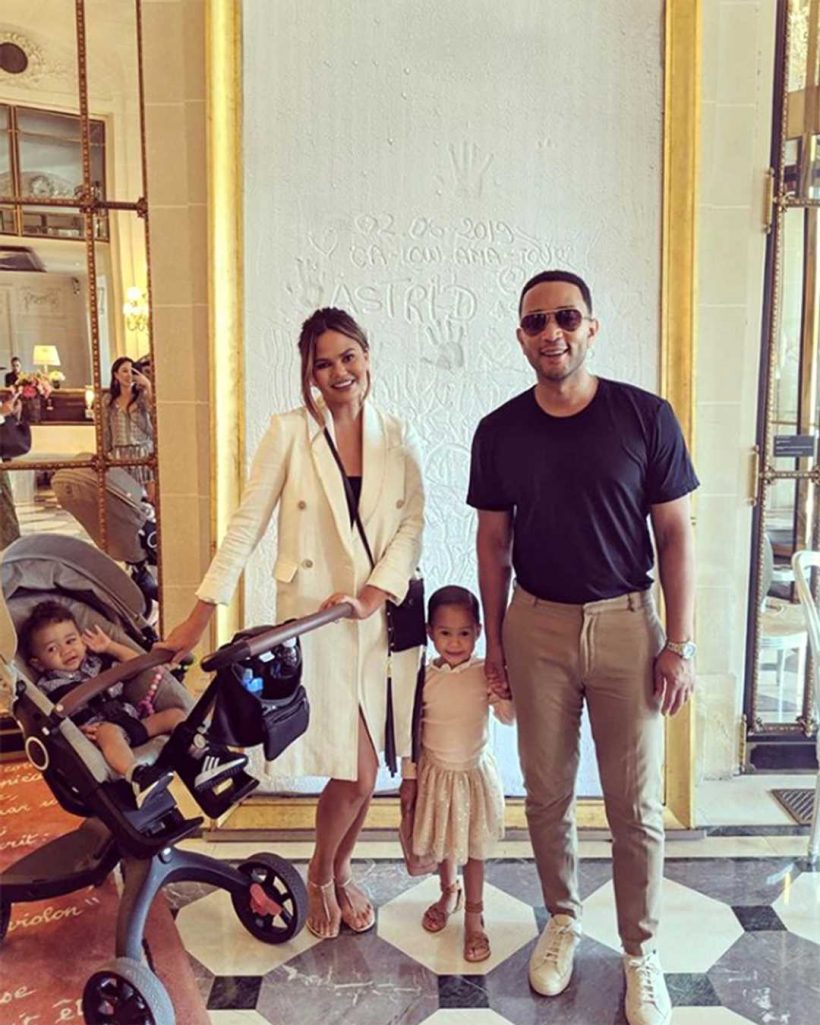 The A-list star’s baby boy, is not only a world traveler, but the wife of singer John Legend, recently revealed on Instagram that Miles may be ready to take his first steps while abroad.

“I think someone’s gonna take his first steps in Italy! oh dear,” Teigen captioned a sweet photo of her son who appeared as if he was attempting to go for his first big stroll.

The mom’s photo comes days after her husband also shared his own photos of their family’s European getaway.

The couple, who is known for sharing adorable photos of their children, both took turns posting different pics and videos of their 3-year-old daughter, Luna.

“Luna’s in Paris,” Legend captioned an Instagram post of he and his daughter strolling down the Parisienne streets. The 3-year-old looked chic in a white dress with black, ankle sandals and cool, dark shades.

The proud father also shared another photo of his daughter which featured little Luna in a long, lace dress accessorized with a matching bow in her hair.

“My little angel (most of the time),” he wrote.

Teigen and Legend, who have been married since 2013, never shy away from sharing photos of videos of their children and coming to their defense when need be.

On Monday, Teigen, 33, shared two adorable Instagram videos of her daughter  bargaining with her mom over how much candy she would be allowed to have if she promised to be on her best behavior.

“I want the candy ’cause I want it … and I like it,” Luna says in the clip when asked by Teigen why she deserves the candy.

But some viewers were more focused on the 3-year-old’s hair as opposed to the cute candy comment.

Related: Chrissy Teigen Fires Back at Troll Who Criticized Luna’s Hair: ‘Maybe She Can Come Do Your Makeup’

“Finally someone brushed her hair,” a user wrote in the comment section of the video.

In the clip, Luna can be seen with her hair slicked back into a tiny ponytail.

Teigen quickly fired back at the commentator, writing, “All by herself! Maybe she can come do your makeup.”

But this isn’t the first time the mother of two has had to defend one of her children against online haters.

Back in December, Teigen took the opportunity to address some Twitter “trolls” who left negative comments concerning her 1-year-old son Miles Theodore‘s helmet, which she previously explained he is wearing to treat his “adorably slightly misshapen head” as a result of Plagiocephaly.

“Good morning trolls! Just a friendly reminder that you do not indeed know absolutely everything,” began the model.

“Miles has been seeing a physiotherapist — we didn’t just go straight to helmet,” she continued. “We tried muscle work and will continue. Also your flat headed kid turned out fine yes yes yes I agree.”