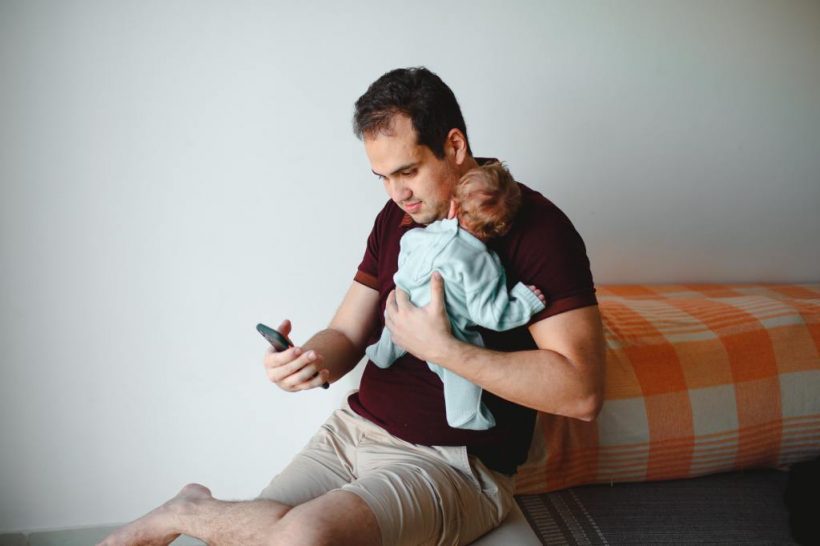 Everyone knows when you have a baby, you forget about your older kids…right? Wait, you still have to actually parent your older kids, too?! Say it ain’t so! (Can you tell I’m rolling my eyes right now?) One dad on Reddit was apparently shocked that his ex-wife expected him to take his older daughters after bringing his newborn son home, and we actually can’t believe the utter ridiculousness of this man.

The dad tells the story in his own words in the “Am I The A—hole?” subreddit, and we are honestly just surprised he didn’t figure out he was TA while typing this story.

First, the background: his ex-wife, Emma, was pregnant at the same time as his current wife, Lara. The two women were due about 10 weeks apart, and Lara gave birth to their son in November.

“Three days after he and Lara came home, I received a panicked call from my SIL asking if I could take my daughters (9F twins) as Emma had been taken to hospital the night before and was being taken for a c-section,” the man wrote. Sounds like a no-brainer, right? The girls’ mom was in the hospital, having her baby extremely early due to a medical emergency, and the dad was (supposedly) on paternity leave at home with his new baby. Plus, his brother and sister-in-law couldn’t watch them longer, as they had four children in their house already.

But for some reason, this dad couldn’t be bothered to, you know, be a decent human being — not to mention a good dad — and declined.

“I told my SIL that we couldn’t take the girls because we had just had our son and we were wanting to spend the time just bonding as a family of three,” he wrote, and my mouth is hanging open. Having a new baby and a new wife doesn’t negate the fact that you already have two daughters. Are you kidding me? They are your kids, and your responsibility. Pawning them off on your brother and his wife is just so rude.

He went on, “SIL angrily told me that having my new son didn’t cancel out the fact I already had two daughters.” Um, duh! The man, who apparently read through the Deadbeat Dad manual before answering the phone, opened his mouth to make things worse.

“I apologised and told her that I couldn’t take them in right now but I would send her some money to help out while they have the girls,” he continued, as if money is a replacement for neglecting and abandoning your own children.

In a (terrible) effort to justify his logic, he went on, “If we hadn’t just brought him home, I would have taken the girls in, but Lara and I had already decided that we didn’t want any guests for the first few weeks and I had told Emma this.” Oh. My bad. You told your ex-wife that you didn’t want anyone over, so she should have had the consideration not to go into a medical emergency and need your help … with your children. What the actual F?

Not to mention, your kids are not “guests.” He is actually disowning and dismissing his own daughters because he has a new son now, and I’ve never been more disgusted in my life.

Because other people in these girls’ lives aren’t a-holes, they luckily weren’t left homeless for the night.

“While Emma was in the hospital, the girls stayed with SIL and my brother another night before they went to stay with Emma’s husband’s parents,” he said. “While the baby was in hospital, because Emma and her husband were spending most of their time at the hospital, they were cared for a lot by Emma’s in laws or my SIL and brother.”

It’s nice to see some people care about them! Then the dad finally decides he can help out … after a week! He wrote, “After a week or so, Lara and I offered to take the girls but they told us they didn’t want to stay because we were more focused on our son. It did feel like they were just parroting what they had heard from the adults around them. Though admittedly with the sleepless nights I did forget some things such as the video call with the girls.”

Wow. Just wow. So these girls know they are not as loved as their baby brother by their dad. Father of the Year right there. But it’s OK, because they are just “parroting” what they heard, since they couldn’t possibly put two and two together that you abandoned them in their time of need because of your new baby — and couldn’t even be bothered to pick up the phone and call them. This whole situation is just so sad.

Emma and the baby are home now, and she is ready to raise hell for her daughters (as she should!). He explained that his ex-wife “sent me a long email in the middle of the night explaining that she was disappointed in my actions and thought that I would see this is a medical emergency and I wouldn’t need to be asked to take them in.” Excuse her for thinking that her ex, the father of her children, was at least as kind as a next-door neighbor would have been.

“I told her that we had just had [our] son and I had to think about his needs as well, especially when there was plenty of people around them to care for them,” he wrote, completely ignoring the fact that the people who were “around” asked for help because it was too much for them. “Emma’s told me that any communication is to now go through the lawyer because she’s fed up of dealing with me and is going to take me to court to get full custody instead of 50/50,” he said. Good on her! Some stories do have a happy ending after all.

But this man-baby was upset about that — and not for the reason he should have been.

“I didn’t think it was unreasonable to not take them in given we had just had a baby,” he wrote. “Lara wants me to fix it as we can’t afford my child maintenance more than doubling if Emma gets full custody.”

He literally still doesn’t care about his daughters! He’s upset because his wife’s upset, and she’s only upset because they’ll be out child support money.

In an edit, the dad added, “Don’t get me wrong, I love my daughters. I cherish the time I get with them, if I lost custody I know Emma wouldn’t allow me to get to see them. She had wanted full custody when we divorced, but I fought for 50/50. She was angry about the divorce.”

People were quick to eviscerate this loser. One person highlighted where he called his new wife and son “a family of three” and wrote, “… but you’re a family of five. YTA.” So true.

“I caught that too, he flat out said that his own daughters are not his nuclear family,” another wrote.

Someone else said, “I GASPED at ‘guests’. Fell off my chair at ‘guests’. Had a heart attack at ‘guests’.” I’m dying laughing. They added, “I would bet ONE MILLION DOLLARS that this man has referred to caring for his own children as ‘babysitting.’”

“He also literally forgot about them for 2 weeks,” another pointed out. “His children who were already scared because mom gave birth 9 weeks early. He is such a f*cking asshole.”

“I hope your ex wife gets full custody,” someone else wrote, which is exactly what I think, too. “Your ex wife had a medical emergency. YOU as the father are required to look after your own damn children. It was not the responsibility of your Inlaws. Wow you are some piece of work. YTA.”

“The sheer audacity of the man. Why did he even want 50/50 custody if he only ever intended to be a fair weather father?” another asked.

Someone else noticed, “And the only reason he’s worried/ feels bad is that the ex wife is going to get full custody now and he can’t afford child support bc he has to support his ‘family of three.’ Can’t even believed he typed this whole thing out.” Seriously! How could he type this out and still think he was in the wrong? It’s ridiculous.

“YTA I couldn’t even finish reading this,” another wrote. “The words ‘taken the girls in’ and ‘guests’ did me in. They’re your responsibility. Yours. Not SIL’s. They’re literally YOUR children. So you can’t ‘take them in’ because they literally belong to you. And they aren’t guests because they literally share your DNA you AH. I honestly can’t believe you would pass up the time to have all three of your children bond together early. You know … your baby’s LITERAL SISTERS. Grow up.”

Some people just shouldn’t reproduce, especially if they are going to be this selfish.