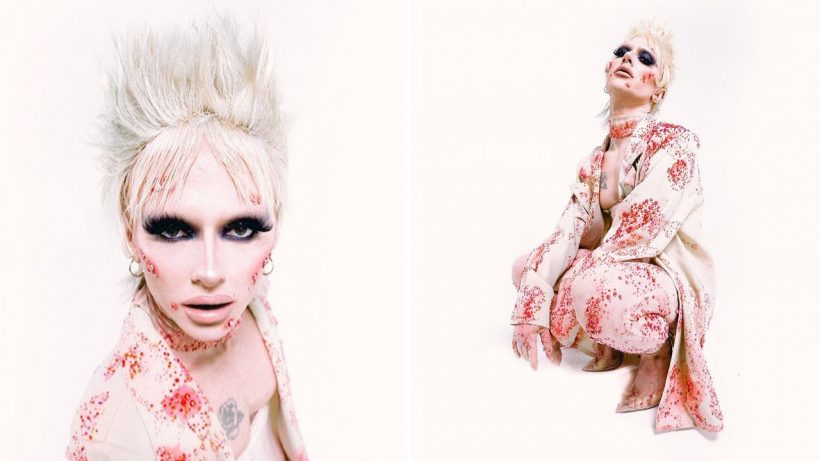 The runway game on RuPaul's Drag Race is so incredibly fierce across the board in recent seasons that it's become increasingly rare for me to be totally entranced by a drag look — but Bimini Bon Boulash, from season two of the show's UK counterpart, managed to do it seemingly without effort with an entire outfit adorned in faux, bejeweled zits. That's right, sparkly acne has just made its way down the iconic Drag Race runway.

During the March 4 episode, Bimini (can I call you babes, babes?) presented her “zit suit” for the week's given theme, “stoned on the runway,” for which every queen delivered some sort of jewel-encrusted look. She wore flesh tones from head to toe in the form of strappy heels, striped tights, and an oversized jacket, all of which were covered in uneven clusters of red gems meant to look like acne breakouts. Underneath Bimini's shaggy platinum-blonde wig, her skin featured the same sparkly “zits,” which she pretended to pop with her fingers as she walked and posed for the judges.

In other words: Bimini Bon Boulash just made acne objectively gorgeous, nay, fashionable, to the masses. The minute she appeared in this look, I audibly gasped and called my roommate — who's lived with severe hormonal cystic acne her entire life — into the room. Her response? “This is the kind of stuff that I really needed to see on TV when I was young.”

And I know exactly what she meant by that. Positioning zits as something artist and cool can definitely help people feel more confident in regards to their own breakouts — and if that's not the power of drag at work, I frankly don't know what is. Seeing as Bimini received glowing critiques from RuPaul and company (and was later announced the winning queen of the week), the judges clearly agree.

To see this episode and all other episodes of RuPaul's Drag Race UK from the US, you'll need a membership for Wow Presents Plus, which also features the franchise's other international series.