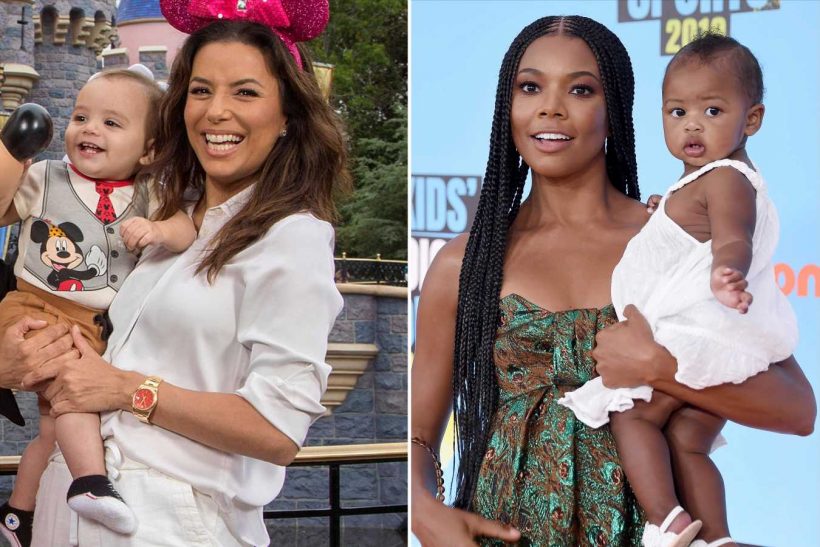 Gabrielle Union and Eva Longoria are taking a stand for working moms.

The stars, who recently welcomed their own children — Union, 46, and husband Dwyane Wade‘s baby girl Kaavia James arrived via surrogate in November 2018 and Longoria, 44, gave birth to son Santiago Enrique with husband José Baston in June 2018 — are trying to normalize having babies on the red carpet, in writers’ rooms and on the sets of their projects, the pair told Harper’s Bazaar.

Union and Longoria are part of an “unofficial” society of film industry mothers “who are rewriting the rules of working parenthood,” Harper’s Bazaar reports.

Their decision to speak out comes after British filmmaker Greta Bellamacina was turned away because she brought her infant child to the Cannes Film Festival 2019 red carpet screening of her own film Hurt By Paradise.

While there still is a lot of work to be done on the matter, Union revealed that on the set of her show L.A.’s Finest being a working mom is okay.

Union executive produces the show alongside Jessica Alba, who also stars in the series.

“When Jessica was negotiating she had just given birth and was just very clear about what she needed and that she understood her value, and it paved the way for all of us to have access to our kids,” Union told Harper’s Bazaar.

“When I came back from maternity leave, Jess made sure my trailer had everything that hers had so Kaav could come right to set. No one’s had to make that crazy crazy sacrifice of going back to work and just, like, leaving your kid,” Union told Harper’s Bazaar of Alba. “Jess was like, f— that. I’m going to create the Hollywood that I’ve dreamed of and that I need.”

Furthermore, Union feels the need to change the way mothers appear on the big screen.

“Watching television now, I can absolutely tell when a man wrote the role of a woman being a mother,” Union told Harper’s Bazaar. “It’s either she’s Madonna Mary perfect, or has some super-human strength, or she is just one long-ass f——- sacrifice. But there is no nuance.”

Union also expressed her desire to represent moms of all walks of life because “I was a stepmomma, but being a step-parent doesn’t count to a lot of people,” she told the magazine.

“All moms are not created equal, and all moms do not enjoy every aspect of parenting. Resources, privilege, race, region, and support all play a role in how we experience parenting. Playing a black mom, if I’m not going to bring that full experience to the table, I’m not interested,” Union explained to Harper’s Bazaar.

Longoria, who made a point to “acknowledge that I come from a place of privilege,” explained that motherhood has also changed the way she views the world.

“I have my family. I have resources and help. I have supportive husband. So there’s that disclaimer. But it is uncommon in our industry for women to direct and produce, much less so a woman with a baby,” she told Harper’s Bazaar.

“I have anxiety now about leaving the world a better place. My heart breaks in a way it has never broken before,” Longoria told Harper’s Bazaar in the wake of today’s political climate.

On Tuesday, Union shared a video of her 9-month-old daughter reciting her first word (nay, phrase) — “Bye-bye” — which she told PEOPLE later that evening was fitting for Kaavia’s personality.

“She’s very much her own person,” Union said the America’s Got Talent judge at a live event for the reality competition show on Tuesday night in Hollywood. “We say ‘Hi’ and ‘Hey’ so she kinda gets that, she says that pretty okay. But when we leave her, we say ‘Bye-bye,’ and that’s what stuck. And that’s what is super clear. She’s very articulate with the ‘Bye-bye.’ “

Longoria celebrated Santiago’s first birthday on June 19, and the mother-son-duo celebrated the milestone with a trip to — where else? — the Happiest Place on Earth.

In a pair of photos Longoria shared to her Instagram account on Thursday, she holds baby Santi as the youngster sports a huge smile, excitedly grasping hands with Mickey Mouse himself. In the background sits Sleeping Beauty Castle.