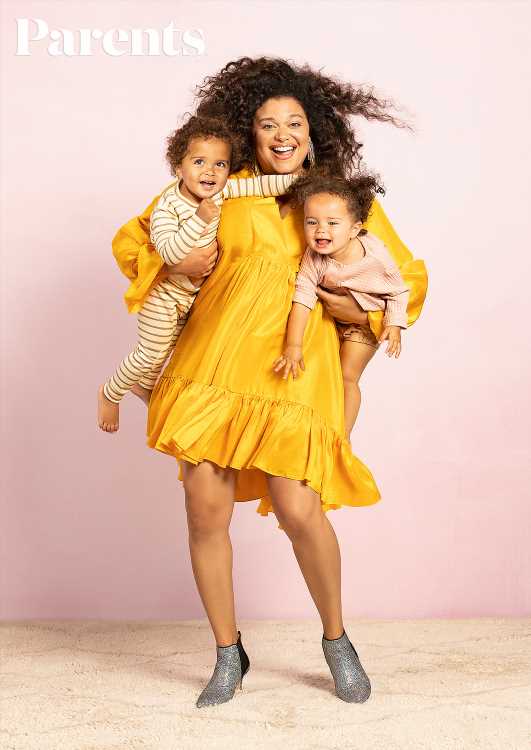 Comedian Michelle Buteau has had her hands full raising twins during quarantine, but at least in retrospect she can (somewhat) laugh about the experience.

"I didn't know if I could do it," she told friend Wanda Sykes, also a mom to twins, for the cover story of Parents' December issue. Buteau, 43, and husband Gijs van der Most welcomed now-21-month-old twins Hazel and Otis in January 2019, and when the pandemic lockdown began to set in earlier this year, she admits to feeling overwhelmed.

"Up until [the quarantine] I had always had help with the babies. So being alone with them, it felt like I was snorkeling for the first time and didn't know how to breathe yet," she said. "I felt bad for being impatient. I don't want to be that parent yelling all the time."

Buteau, whose Netflix comedy special Welcome to Buteaupia is streaming now, recalled that she "quickly learned that it's all about taking five in the bathroom, recollecting your thoughts, putting on the TV, giving them a crayon" to stay sane. In the end, the mom of two realized that she "can do this."

"Up until the pandemic, we had an amazing nanny, and I had friendships. Now that we're really broken-in as a family, I feel like, 'Oh wow, I got this,' " said Buteau. Michelle Buteau on Her Struggles with Infertility and Adoption, as Well as Racism in Health Care

The Always Be My Maybe actress has previously been open about struggling with infertility and IVF, as well as welcoming her children via surrogacy. She told Sykes, 56 — who shares twins Olivia and Lucas, 11, with wife Alex — that she "didn't realize I was in a world of hurt until the kids arrived."

"Honestly, sometimes people going through it don't even know what they're going through," said Buteau. "I didn't realize I was in a world of hurt until the kids arrived. Then I thought, 'How did I just walk around with bruises all over my body and needles in my suitcases, trying to be funny onstage?' That is wild."

Buteau described her twins as having "such different personalities and therefore different vibes," and added that they are currently into swimming, hugs and watching "lots of Wiggles."

In September, Buteau opened up to PEOPLE about feeling "forever thankful" for her surrogate, but having a hard time coming around to the idea at first. She said she and her husband were "at the end of [their] road in terms of" her "trying" to carry a baby, having gone through IVF and beginning to see the toll it was taking on her mind and body.

"My husband said, 'You know, I want you back. You are so unhappy and just physically wrecked,' " she said.

While "surrogacy is not something you go into IVF thinking, 'This is what I'm going to be doing,' " the comedian acknowledged that it's "so beautiful that that is even a choice," even though it was "scary."

"I didn't know anyone that did it," Buteau said. "I didn't have anyone to talk to about it. I just researched. I found an agency through my doctor where these women are just walking angels on Earth who find helping someone make their dreams come true the best thing ever."