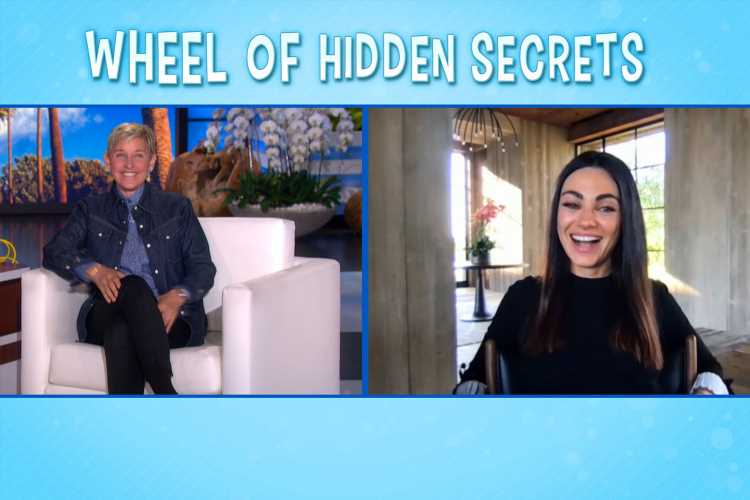 The Breaking News in Yuba County actress, 37, appeared on The Ellen DeGeneres Show Tuesday, where she opened up about life at home in quarantine with her two children, daughter Wyatt Isabelle, 6, and son Dimitri Portwood, 4. Kunis joked to DeGeneres that her kids have a way of seeking them out in lockdown no matter what.

"I love my kids very much, we both do, but they're like dogs: they can sniff you out!" she said. "They know your smell, they know what room you're hiding in — you can't get away from them. You just can't. They're just there."

Kunis also recalled agreeing to do the Cheetos Super Bowl commercial with Kutcher, 43, in order to get a mini "vacation" from parenting — but her husband didn't read the fine print when they signed on.

During Sunday's big game broadcast, the couple's silly Cheetos ad debuted, featuring Kunis caught orange-handed sneaking into his bag of Cheetos behind her husband's back. Kutcher then sings a comedic version of "It Wasn't Me" along with Shaggy, but Kunis told DeGeneres her husband "didn't know" the role required vocals.

Want to get the biggest stories from PEOPLE every weekday? Subscribe to our new podcast, PEOPLE Every Day, to get the essential celebrity, entertainment and human interest news stories Monday through Friday. "In the peak of the pandemic, it made no sense logically, it may have been like the worst … we were so quarantined, as you know, but I was also dying to get out of the house," recalled Kunis. "I was literally like, 'I don't care, I need to get out of this house!' I looked at it as a two-day vacation."

"We talked to the director and he was like, 'Yeah, and then Ashton's singing.' He was like, 'I'm what?' " she recalled with a laugh.

Kunis recounted the "bizarre circumstance" of shooting the Cheetos ad while social distancing and following health safety measures, adding of the up side: "I got two days off from my kids. I'm a horrible mom!" she joked.

Kunis previously told Entertainment Tonight that the motivation behind taking the gig had to do with their need to escape lockdown with their children.

"In the midst of quarantine, they sent us this ad to do, and every time I've ever been offered a Super Bowl ad it's always a female having to be scantily clad," she told the outlet. "And this one comes around, I started laughing so hard and Ashton was like, 'This is kind of funny.' And I was like, 'We should do it!' "

"Also it was quarantine and we were stuck with our children for nine [or] 12 months at this moment, and I was like, 'Two days, baby! Two days off!' " joked Kunis. "Literally we were like, 'Yeah, okay, let's do it.' And so we did it. And I hate saying it but we were like, 'Freedom!' "

The actress called the brief time away from home "amazing" while adding, "I love my children so very much!" She then admitted being apart from her little ones felt "weird" since they're so tight-knit.