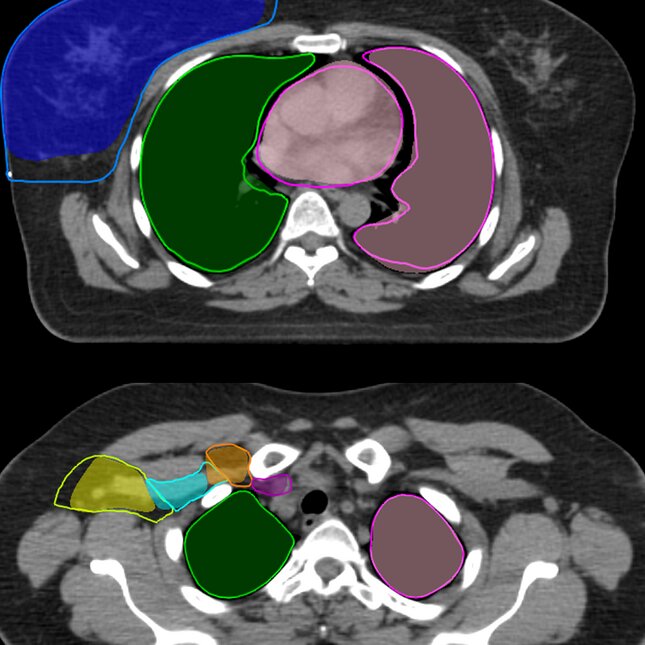 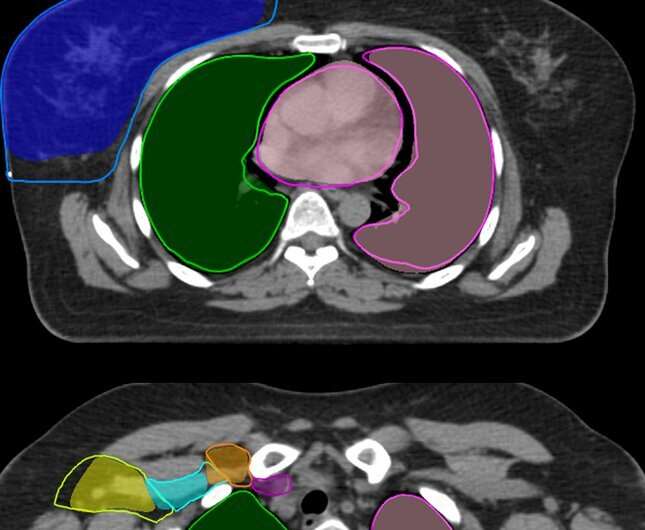 At the Catharina Hospital in Eindhoven much of the work involved in radiotherapy for breast cancer patients has already been automated. The hospital has the most precise and smart treatment equipment for cancer patients. But until now, making precise radiation plans and delineating the organs of individual patients on CT images is still largely done by hand. This could be about to change, thanks to research by PDEng student Nienke Bakx of Eindhoven University of Technology. The research is published in Radiation Oncology.

Nienke Bakx began her graduate program at Catharina Hospital about two and a half years ago to research the use of artificial intelligence in generating radiation treatment plans for breast cancer patients.

AI can take the existing expertise and experience of employees to the next level, explains Coen Hurkmans, a clinical physicist at Catharina and Bakx’s supervisor. “However, you have to be able to capture that knowledge in data first. And that is where TU/e comes in. That’s where the necessary knowledge of data analysis and algorithms is to be found.”

After graduation, Bakx continued as a trainee of the Qualified Medical Engineer post-master program to perform extensive clinical tests of her planning methodology. The PDEng-student also investigated whether the delineation of organs of breast cancer patients can be done quickly, accurately and reliably by computer.

The result of her efforts is now here: starting this spring, the radiotherapy department of the Catherina Hospital will partly switch to AI-generated plans. And in June this will also happen with the delineation imaging of organs. It will save radiation therapists and radiation oncologists hours of work per patient and ensure greater consistency, Hurkmans says.

“When people with breast cancer need to be irradiated, the radiation oncologist looks at what is needed exactly: how much dose, how many sessions, with what frequency? Then we have to ensure that the treatment is also carried out properly technically. For this we need images of the patient in the radiation treatment position. At present we still use CT images, but in the near future these will increasingly be MRI images. The organs are delineated very precisely on the images,” Hurkmans says.

“Then we simulate in a kind of flight simulator how we want to irradiate: from which side and with what intensity, so that as much radiation as possible gets into the tumor and as little as possible reaches the surrounding tissue.”

Inside the simulator is a model of the treatment equipment plus images of the individual patient’s anatomy. An experienced planning radiation technologist then creates a radiation plan. That work can be automated. Healthcare professionals naturally look with a very practiced eye. Artificial intelligence is a practical and efficient way to capture, calculate and interpret their knowledge and experience. If you put dozens of previously created treatment plans into a model you can train the computer to create them itself.

Nienke Bakx: “Elsewhere in the world, this has already been done for prostate cancer and cancer of the head and neck, among others, but not before for breast cancer. I first figured out what analysis models and algorithms have been used for those other areas.”

Two validated software models stood out: the open source U-Net model, which is based on convolutional neural networks, CNNs. Very simply put, the model digs deeper and deeper into data. And the cARF model, where cARF stands for contextual Atlas Regression Forest.

The latter model was used and trained by RaySearch Laboratories (RS), a Swedish medical technology company that collaborates with cancer institutes around the world on better treatment methods. The Catharina Hospital uses the RS software.

Nienke Bakx filled both models with data from over one hundred patient treatment plans. The trained models were then tested during a clinical pilot with data from twenty completely new patients. Radiation therapists and radiation oncologists made their plans for these twenty patients by hand and compared them with the automatically generated plans in order to optimize the software even further. The better the input, the better the output.

That gave a very good result: 95% of what the computer came up with turned out to be usable without any manual adjustment. From the predictions of the required doses, it also turned out to be very easy to derive the final machine parameters.

The U-Net model scored just a bit better than the cARF model, which is reason enough for RaySearch to start using that U-Net model in the RayStation software for radiotherapy patient planning. They are working on a new module for breast radiotherapy.

During her research, Bakx consulted extensively with the radiation therapists and radiation oncologists: what did they think of the plans, would they actually use them? That is important for the acceptance of the new working method. It turned out that some specialists thought the models were never any better, whereas others did.

Hurkmans: “This project is not just about applying AI and using the right algorithms. It also gives a lot of insight into how people deal with it in practice and what they find important. It is very important to get consensus. We have noticed that there is even more information in their heads. We want to get it out and process it. We want to get even clearer about what exactly they want. These mutual discussions are already leading to quality improvements.”

Catharina now has a fully trained, validated working model that has gone live in clinical practice May 10th. A great milestone. Incidentally, radiation therapists and radiation oncologists check everything that is set up automatically. So they can easily make changes themselves if they want to.

In the near future, the computer will also indicate which part of the delineation it is perhaps less certain about, so that a human eye can take a closer look.

“People don’t have to worry that they won’t have work anymore. What we can standardize and automate, we do. Then employees can focus on what they are good at, such as conducting patient interviews or working on further improvements,” Hurkmans emphasizes.

The model for automatically drawing in the organs and glandular areas is also ready, and a clinical pilot is now coming up. Nienke Bakx is pleased that what she did in her master’s degree and her QME period is now really going into clinical practice.