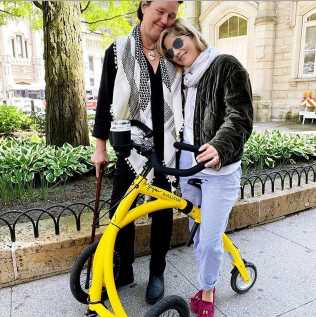 It’s no surprise that being diagnosed with multiple sclerosis has changed Selma Blair‘s life.

Since receiving her MS diagnosis nearly a year ago and undergoing various treatments, the actress, 47, has had to adapt to an often unpredictable array of ever-present symptoms, which include unexpected muscle spasms, constant fatigue and limited mobility, all of which tend to keep her housebound most days.

“I’m unsteady, my legs give way, one drags,” she explains to PEOPLE exclusively in this week’s cover story. “I can pull it together for short periods or take a certain medication that will help if I take it once in a blue moon to appear publicly.”

All of that changed for Blair when friend and fellow actress Jamie-Lynn Sigler, who also has MS, gave her an Alinker bike, a device designed to be a walk assist for the differently abled to help them keep moving. Its innovative design allows Blair to get out of her house and take longer, less labored walks.

Blair has shared her enthusiasm for the bike on Instagram and posted an emotional post-treatment message on Thursday with a photo of her leaning on her Alinker.

Created by Dutch engineer and woodworker B.E. Alink, the Alinker is a pedal-free, three-wheeled walking bike that helps people with mobility issues continue to be active with much less effort and muscle strain than a standard walker or cane, thanks to an adjustable seat and handlebars.

Alink was inspired to design the device when her now 83-year-old mother declared that she would never use a cane or a wheelchair.

“‘Over my dead body will I ever use one of those things,'” Alink recalls her mother declaring, while pointing at a cane. “That started the beginnings of the company,” Alink says. “I realized [most] medical devices emphasize the body with the problem and completely disregard who we are as human beings. The premise for designing this thing was to design something that’s so cool that people would love to use it, and that it allows people to continue to be who they are in their mind.”

Alink hopes the bikes, which currently run $1,977 and are on backorder, will one day be covered by insurance. Until then, Alink and Blair have teamed up to support crowdfund campaigns for people who need them.

“The campaigns that we’re doing, I call them the Selma Fund,” explains Alink. “We want to build a whole support family around the people that need Alinkers that can’t afford them, and bridge the gap between people with and without disabilities.”

So far, the “Selma Fund” efforts are paying off in a big way.

“Sixteen campaigns reached their goal so far, and 11 more are live,” Alink says of their success, adding that the impact of the invention has exceeded all expectations.

“It’s not so much about me, it’s about that people get their lives back,” Alink says. “Selma is one of those examples that has some more exposure. The word gets around, but literally she said, ‘This is my way out again. I can be engaged again. I can hang out with my son outside.’ It’s quite life changing, in a way I could never have fathomed when I developed it.”

For more information about the Alinker and the crowdfund campaigns, visit thealinker.com