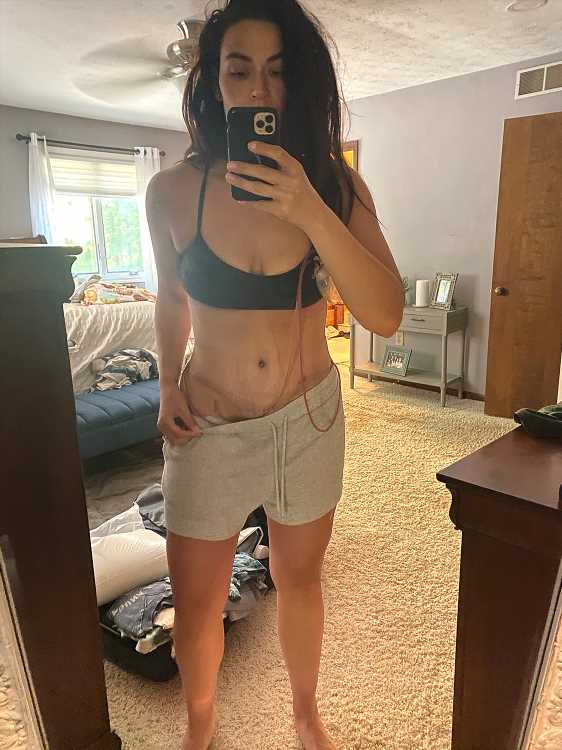 Erica Lugo still has several weeks to go as she recovers from a full tummy tuck, but she’s already “floored” by the result.

Underneath the swelling, the Biggest Loser trainer, 34, can already see a major difference after doctors removed 8½ lbs. of skin from her stomach.

Lugo, who lost 160 lbs. and started her own training company before joining the USA Network reboot, decided to get a tummy tuck on Sept. 22 after struggling with pain and rashes from her loose skin. Other than a panic attack just before going under anesthesia, the surgery went well, and Lugo woke up the next day back at a condo she had rented with her husband, post-op.

“All I remember is that one anxiety attack and the nurse calming me down and that was it. Then I woke up and I was back in my condo and I thought, ‘What the hell, I have a new stomach, what's going on?’ ” she says, laughing.

Lugo and her husband, Danny McGeady, stayed at the condo for six days before flying home to Ohio, and she says the recovery process has been a “super humbling experience.”

“I've had to really lean into my husband and I'm super independent, so it’s hard for me to do,” she says. “He was having to wheelchair me around and carry my bag, and keep a schedule of my medication and my antibiotics. And he was checking my drains every two hours.”

The drains — plastic balloons attached to her body to suck out the excess fluid from the incision area — are “the biggest pain in the butt,” Lugo says, but she’s now down from four around her waist to just one. She also has to retape the bandages around her wound every three days, and wear a waist binder to reduce swelling. At first, Lugo felt like she was going to “snap in half” when she stood up because her skin was pulled so tightly, and “something as simple as sitting to pee was impossible.” But “every day gets a little bit better.” It will take a couple more weeks before the swelling goes down in her waist, and then several months to see the full results from her tummy tuck, but “every day I look at my stomach and I’m floored at how different it all looks,” Lugo says.

“They got rid of 8½ lbs. of nothing but skin,” she says. “The doctor was like, ‘You’ve always wanted your six-pack? You’re probably going to get it after this because there’s no fat on your stomach.”

For Lugo, one of the toughest parts of recovery is that she can’t work out — a mental struggle for the trainer.

“It’s hard, especially as a ‘fitness professional,’ ” she says. “I’m already thinking, ‘Oh my gosh, my muscle mass in my arms are going away or my quads are going away.’ Or, ‘Do I look a little bit plumper in my face?’ ”

The recovery process, Lugo says, “is challenging me to think about this in another light.”

“I'm not as vanity-driven now because I’m thinking about what's best for my health,” she says. “Maybe I can learn a little bit more about my relationship with food, or maybe I can help myself with my battles with body image during this time. Because I can't rely on working out for an hour a day and being so active and feeling the endorphins.”

UPDATE Not being able to workout nor can I move around much is humbling me to say the least. I’m 8 days post full 360 lift op and I’m mentally already going crazy. It’s crazy to me to be living in this new body and want to “take it for a spin” 🤣 “I’m clearly going to fall behind in every aspect because I don’t keep up or workout for the next 4 week!” How many of you have a hard time with rest? Than you’re probably the ones who need it the most. Pro athletes take off seasons, but why can’t we? Why don’t we? Who’s been training 5-6 days a week for years? 🙋🏽‍♀️🙋🏽‍♀️🙋🏽‍♀️ Guilty AF I’m using this off season to focus on all the behind the scenes work. Thank you for all the well wishes and love. I’ve felt it all! Can’t wait to get back to posting workout videos and content for you soon!

But Lugo isn’t using this time to restrict herself. She’s eating a similar diet to what she consumes when she’s working out, just with a few less snacks.

“I didn't want to put myself on a super strict diet,” she says. “I feel like that's just going to make it mentally harder for me when I do go back to working out — it just creates that all or nothing mindset that I don't want people to adopt and I don’t want people to live by.”

For now, she’s looking forward to getting all of her drains out — and the day when she can wear all the crop tops she bought.

“I was so hopped up on painkillers after surgery that I ordered so many crop tops on Amazon and Lululemon, and I didn't even remember. So when I got home, on the porch, there was like 15 new crop tops. So apparently I’m excited for that!”