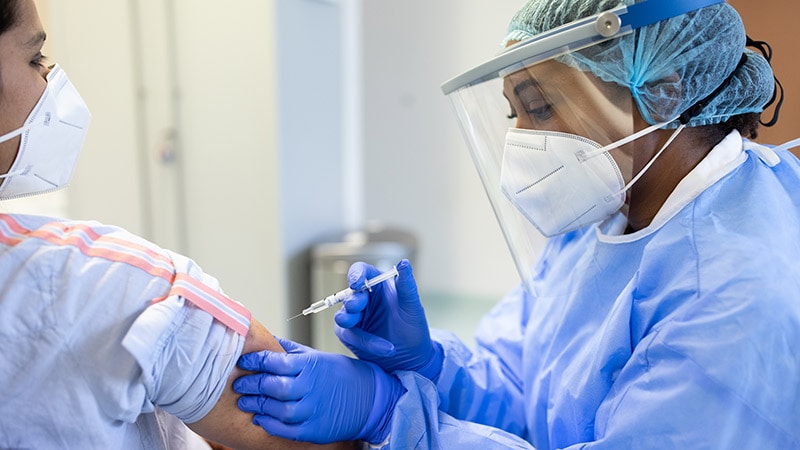 Ten percent of patients with immune-mediated inflammatory diseases (IMIDs) fail to respond properly to COVID-19 vaccinations regardless of medication, researchers report, and small new studies suggest those on methotrexate and rituximab may be especially vulnerable to vaccine failure.

Even so, it’s still crucially vital for patients with IMIDs to get vaccinated and for clinicians to follow recommendations to temporarily withhold certain medications around the time of vaccination, rheumatologist Anne R. Bass, MD, of Weill Cornell Medicine and the Hospital for Special Surgery, New York, said in an interview. “We’re not making any significant adjustments,” added Bass, a coauthor of the American College of Rheumatology’s COVID-19 vaccination guidelines for patients with rheumatic and musculoskeletal diseases.

The findings appear in a trio of studies in Annals of the Rheumatic Diseases. The most recent study, which appeared May 25, 2021, found that more than one-third of patients with IMIDs who took methotrexate didn’t produce adequate antibody levels after vaccination versus 10% of those in other groups. (P < .001) A May 11 study found that 20 of 30 patients with rheumatic diseases on rituximab failed to respond to vaccination. And a May 6 study reported that immune responses against SARS-CoV-2 are “somewhat delayed and reduced” in patients with IMID, with 99.5% of a control group developing neutralizing antibody activity after vaccination versus 90% of those with IMID (P = .0008).

Team members were surprised by the high number of vaccine nonresponders in the May 6 IMID study, coauthor Georg Schett, MD, of Germany’s Friedrich-Alexander University Erlangen-Nuremberg and University Hospital Erlangen, said in an interview.

The patients with IMID most commonly had spondyloarthritis (32.1%), RA (29.8%), inflammatory bowel disease (9.5%), and psoriasis (9.5%). Nearly 43% of the patients were treated with biologic and targeted synthetic disease-modifying antirheumatic drugs and 23.9% with conventional synthetic DMARDSs. Another 29% were not treated.

The study authors concluded that “our study provides evidence that, while vaccination against SARS-CoV-2 is well tolerated and even associated with lower incidence of side effects in patients with IMID, its efficacy is somewhat delayed and reduced. Nonetheless, the data also show that, in principle, patients with IMID respond to SARS-CoV-2 vaccination, supporting an aggressive vaccination strategy.”

Lowered Antibody Response to Vaccination for Some Methotrexate Users

In the New York cohort, 96.1% of healthy controls showed “adequate humoral immune response,” along with 92.3% of patients with IMID who weren’t taking methotrexate. However, those on methotrexate had a lower rate of adequate response (72.0%), and the gap persisted even after researchers removed those who showed signs of previous COVID-19 infection (P = .045).

In the German cohort, 98.3% of healthy cohorts and 90.9% of patients with IMID who didn’t receive methotrexate reached an “adequate” humoral response versus just half (50.0%) of those who were taking methotrexate.

When both cohorts are combined, over 90% of the healthy subjects and the patients with IMID on biologic treatments (mainly TNF blockers, n = 37) showed “robust” antibody response. However, only 62% of patients with IMID who took methotrexate (n = 45) reached an “adequate” level of response. The methotrexate gap remained after researchers accounted for differences in age among the cohorts.

What’s going on? “We think that the underlying chronic immune stimulation in autoimmune patients may cause T-cell exhaustion and thus blunts the immune response,” said Schett, who’s also a coauthor of this study. “In addition, specific drugs such as methotrexate could additionally impair the immune response.”

Still, the findings “reiterate that vaccinations are safe and effective, which is what the recommendations state,” he said, adding that more testing of vaccination immune response is wise.

Insights Into Vaccine Response While on Rituximab

Two more reports, also published in Annals of the Rheumatic Diseases, offer insight into vaccine response in patients with IMID who take rituximab.

In one report, published May 11, U.S. researchers retrospectively tracked 89 rheumatic disease patients (76% female; mean age, 61) at a single clinic who’d received at least one dose of a COVID-19 vaccine. Of those, 21 patients showed no sign of vaccine antibody response, and 20 of them were in the group taking rituximab. (The other patient was taking belimumab.) Another 10 patients taking rituximab did show a response.

Finally, an Austrian report published May 6 examined COVID-19 vaccine immune response in five patients who were taking rituximab (four with other drugs such as methotrexate and prednisone). Researchers compared them with eight healthy controls, half who’d been vaccinated.

The researchers found evidence that rituximab “may not have to preclude SARS-CoV-2 vaccination, since a cellular immune response will be mounted even in the absence of circulating B cells. Alternatively, in patients with stable disease, delaying [rituximab] treatment until after the second vaccination may be warranted and, therefore, vaccines with a short interval between first and second vaccination or those showing full protection after a single vaccination may be preferable. Importantly, in the presence of circulating B cells also a humoral immune response may be expected despite prior [rituximab] therapy.”

Bass said the findings reflect growing awareness that “patients with autoimmune disease, especially when they’re on immunosuppressant medications, don’t quite have as optimal responses to the vaccinations.” However, she said, the vaccines are so potent that they’re likely to still have significant efficacy in these patients even if there’s a reduction in response.

What’s next? Schett said “testing immune response to vaccination is important for patients with autoimmune disease. Some of them may need a third vaccination.”