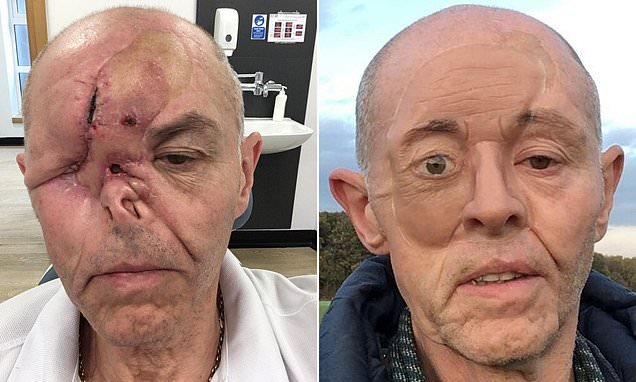 A father-of-two who suffered with a watery eye for eight months found out he had a facial cancer which he dubbed ‘the Alien’.

Graeme Heward, 58, of Lymm, Cheshire, was thought to have the condition dry eye or a blocked tear duct when he saw doctors.

But eventually a mass was discovered in his nose, which led to doctors diagnosing him with a cancer of the nasal lining in 2010.

The physiotherapy was so ’embarrassed’ and devastated about the tumour growing in his face that he preferred to call it ‘the Alien’ than cancer.

Mr Heward was left with a hole in his face and lost his right eye after having around 30 surgeries to tackle the mass. He has since had a skin graft and wears a prosthetic nose and right eye.

Two years ago Mr Heward was told that his cancer was incurable and so he is living the rest of his shortened life raising money for charity. 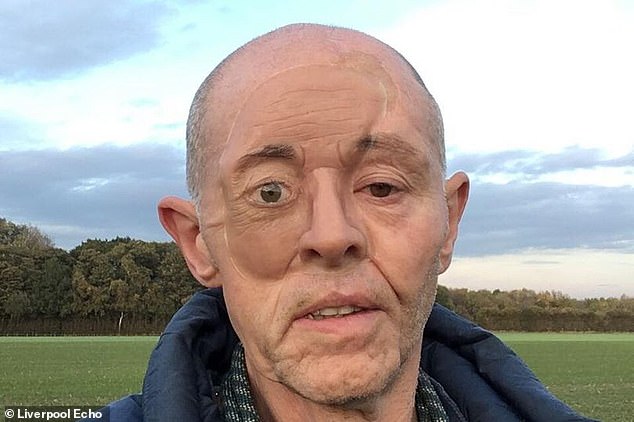 Graeme Heward, 58, who suffered with a watery eye for eight months found out he had a facial cancer which he dubbed ‘the Alien’. He was diagnosed in 2010 and has since had 30 surgeries followed by a skin graft and prosthetic nose and eye (pictured) 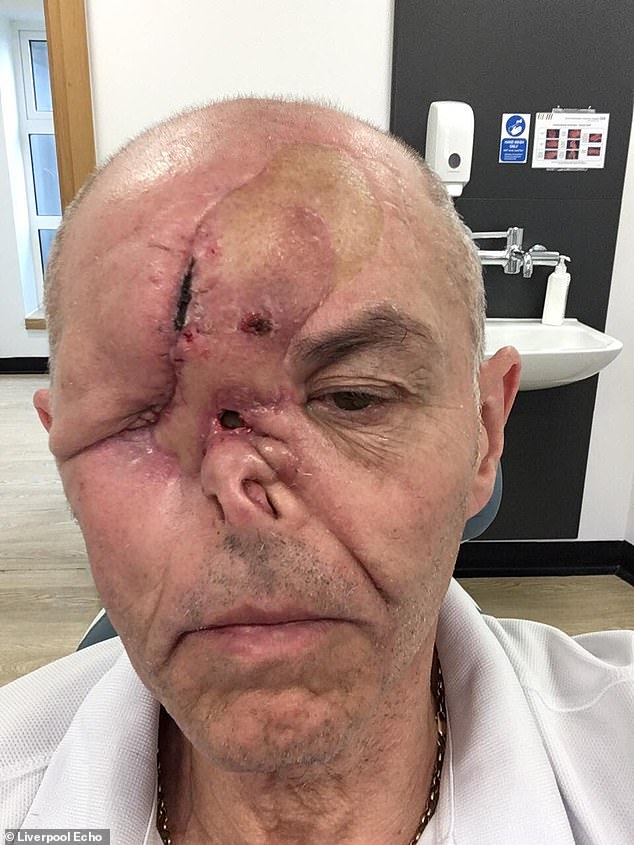 Mr Heward, whose cancer is now incurable, was left with a hole in his face after the surgery to treat the cancerous mass in his nose. Pictured on an unclear date

Mr Heward told the Liverpool Echo: ‘I wasn’t feeling unwell and I didn’t suffer any weight loss, it all started with the watery eye.’

For months, Mr Heward visited the doctors about issues with his eye and pressure in his sinuses, but it is unclear how many times.

When he was finally told he had a tumour growing in his face by an ear, nose and throat specialist, he had been suffering with his symptoms for almost eight months.

Nasal and sinus cancer affects the nasal cavity which is the space behind your nose, and the sinuses, which are small air-filled cavities inside your nose, cheekbones and forehead.

The most common symptoms of nasal and sinus cancer are a persistent blocked nose, which usually only affects one side, nosebleeds, a decreased sense of smell, mucus running from your nose or draining into the back of the nose and throat.

These symptoms can be similar to more common and less serious conditions, such as a cold or sinusitis.

At a later stage, symptoms can include pain or numbness in the face, particularly in the upper cheek, swollen glands in the neck, partial loss of vision or double vision, a bulging or persistently watering eye, pain or pressure in one ear and a persistent lump or growth on your face, nose or roof of your mouth.

It’s a rare type of cancer that most often affects men aged over 40.

Mr Heward said: ‘When the tumour was discovered, I could actually see the mass up my nose, but doctors originally believed it was benign.

‘Later hearing the tumour was cancer was devastating.’

Cancer can start in the lining of the space behind the nose called the nasal cavity, affecting vision, the ability to open the mouth and causing pain.

Only around 400 cases are diagnosed in the UK each year and 2,000 in the US, according to estimates.

It is estimated that around half of people will survive for five years or more after they are diagnosed, according to Cancer Research UK, with survival depending on the stage it is diagnosed. It is not clear what stage Mr Heward’s cancer was.

Mr Heward began calling his tumour ‘the Alien’ because he struggled to say that he had cancer.

He said: ‘It was too painful to admit I had cancer.

‘I was embarrassed for some reason, so I called it the Alien.

‘It was unwanted and unwelcome and it invaded my life.’

Since his diagnosis Mr Heward has undergone almost 30 surgeries, chemotherapy and radiotherapy, which cost him his right eye and left him struggling to breathe out of his nose.

The treatments caused significant damage to his face, and in 2018, Mr Heward was able to have corrective surgery.

He had skin and muscle taken from his thigh before having a prosthetic eye and nose fitted, meaning he can now breathe properly again without pain and even wear his glasses.

Determined to have the longest life he possibly could, he made drastic changes to his habits in order to improve his health. 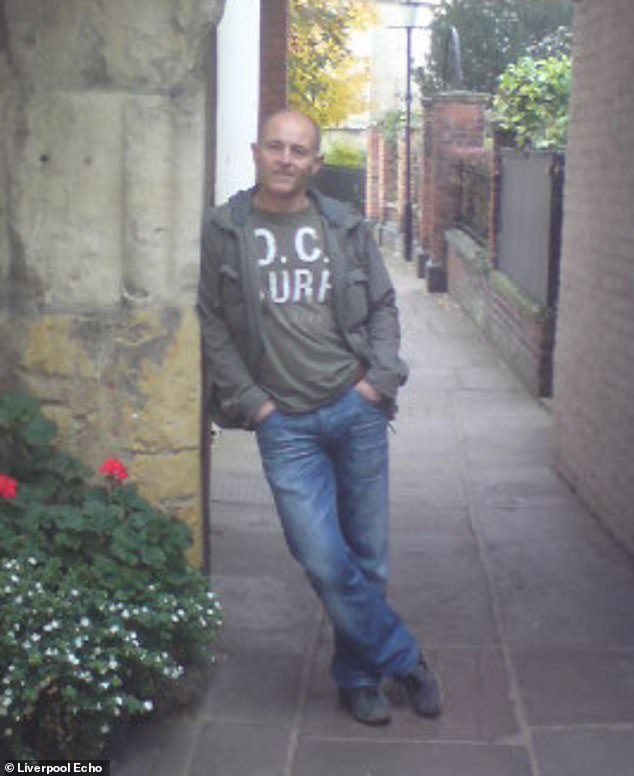 The father-of-two said he had always been fit and healthy (pictured). He complained to doctors about a watery eye and pressure in his sinuses for eight months 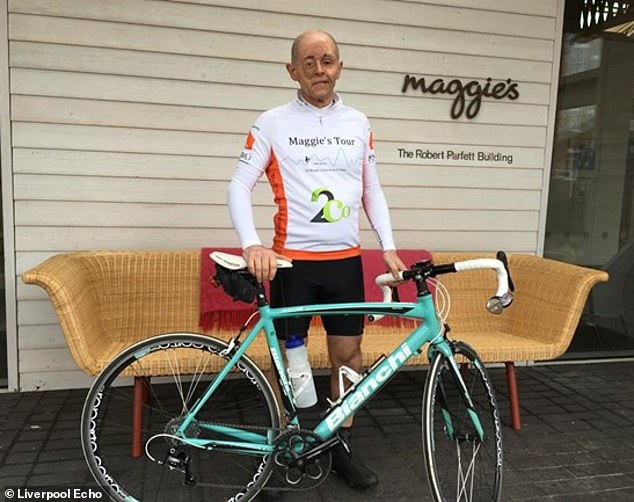 Despite being placed on palliative care, Mr Heward has just begun a 1,000-mile bike ride to raise money for the Maggie centres. He changed his lifestyle habits so that he could extend his life as long as possible. Pictured recently

He said: ‘When I started looking into what I could do, I discovered around 50 changes I could make to my life to keep myself healthy.

‘I changed my diet, reduced stress in my life and limited my exposure to chemicals, to name just a few.

‘I have always been fit and healthy as I work as a physiotherapist but I’ve never been as healthy as I am now.’

The changes Mr Heward made coincided with the opening of Maggie’s centre in Manchester, where he has been receiving emotional support.

Mr Heward said: ‘The ethos of these centres is perhaps best summed up in a quote from their founder Maggie Keswick Jones, “Above all what matters is not to lose the joy of living in the fear of dying”, which is a concept I now embody in my daily life.’

Despite being placed on palliative care, Mr Heward has just started a 1,000-mile bike ride to raise money for the centres, averaging a staggering 80 miles a day.

Having already raised almost £6,000, Mr Heward said: ‘I am surrounded by incredible people who have helped me go through this, including my amazing partner Leslie.

‘But I have also received so much support from Maggie’s and I just want to help them in any way I can.

‘A lot of people don’t know what Maggie’s is and hopefully they will never need to use their services but I just want to help them in any way I can.’

Mr Heward will spend the next two weeks until June 14 cycling from Swansea to Inverness, stopping at each Maggie’s Centre on his way across the country.

To donate to Mr Heward’s fundraiser or find more out about his story, visit his JustGiving page.