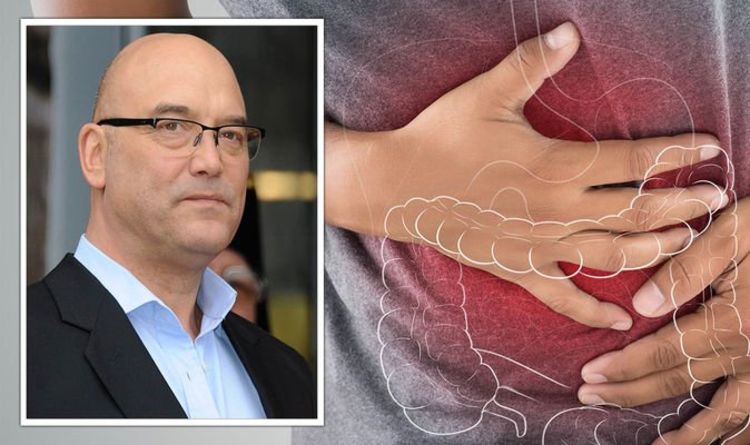 The star, who is currently hosting Masterchef: The Professionals on BBC One, was left shocked and in immense pain after he contracted diverticulitis – a disease that affects the large intestine and bowel. Due to the condition Gregg has had to completely change his diet, avoiding some foods and certain drinks.

More common in older people, the condition quickly leads to abdominal pain, tenderness and fever as within the large intestine, balloon-like sacs – or diverticula – start to form.

It was at this point that Gregg was diagnosed with the condition. Talking to The Mirror he said: “At that point they can burst your intestine. I was almost doubled up in pain.”

The NHS explains that other common symptoms of diverticular disease include:

For those whose intestine becomes infected, like Gregg, symptoms can come on extremely quickly.

The star even explained what causes the condition to worsen, identifying key foods and drinks that should be avoided.

He said: “When they’re irritated, you’ve got to watch alcohol and spicy food. We were eating chilies yesterday. Before that I had a massive skinful of beer in Dublin –and it was already playing up.”

The Mayo Clinic also adds that a diet high in animal fat and low in fibre seems to increase risk of the condition.

What made matters worse for the chef, is that the condition developed after he had been succeeding on a health kick.

When filming for Matserchef: The Professionals, Gregg admitted to taking his eye off the ball.

The star added: “I forgot, because I’d been so well. But yesterday I was ill. I’m turning into one of those old people who has things wrong with them.”

In the past Gregg lost a whopping three stone after receiving a warning from doctors that his cholesterol levels were dangerously high.

The “scary” revelation left Gregg at risk of a heart attack, unless he was willing to drastically change his lifestyle habits and lose weight.

The key to keeping both his cholesterol down and his diverticulitis at bay was through diet.

According to the NHS, a diet high in fibre allows for an individual’s stool to become softer and larger, putting less pressure on the walls of their intestines.

Generally, adults should aim to eat 30g of fibre a day, with good sources being fresh and dried fruits, vegetables, beans and pulses, cereals and starchy foods.

The NHS continues to state that through gradually increasing your fibre intake and drinking plenty of fluids, side effects associated with a high-fibre diet, such as bloating and farting can be prevented.

For those with diverticulitis, a GP may recommend sticking to a fluid-only diet in order to improve symptoms immediately. Once recovered individuals can return to the recommended 30g per day fibre guideline.

In some rare cases, surgery may be needed to treat serious complications of diverticulitis.

This surgery is known as a colectomy, which can lead to individuals needing a permanent or temporary colostomy – where one end of the colon is diverted through an opening in your tummy.