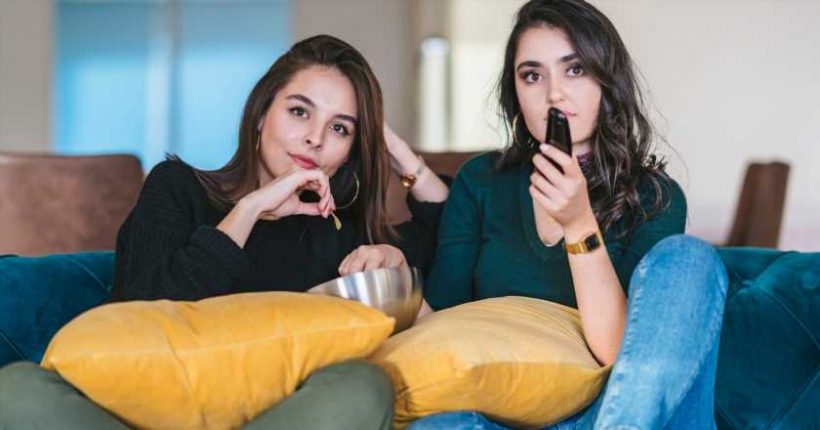 Are you convinced that your periods sync with those of your flatmates and friends periods? Or do you think it’s all a load of coincidence? We ask an expert for the facts.

My best friend lives in Leeds, while I live in east London. We’ve been roughly 200 miles apart for well over five years. And yet, each time one of us comes on our period, the other comes on theirs within the next couple of days. This is despite both of us often having irregular periods. I also often come on my period at the same time as my flatmates. So, I’ve always just assumed that “period syncing” with people I am close to either emotionally or physically was definitely a thing. And it’s something I’ve noticed more and more in lockdown.

But when I confidently mentioned this to my editor, she explained that it’s not actually been confirmed as being fact. “No way!” I gasped, “I thought it was scientifically proven.”

I opened up the idea of period syncing to the wider Stylist team, and it turns out we’re all a bit baffled, intrigued and surprised by it.

Helen shared a pretty spooky experience, saying: “Weirdly, my periods have synced with my personal trainer! She’s the only woman I see in real life at the moment, once a week in lockdown. Maybe they were always the same, but I’m convinced they match up.”

Fliss admitted that, like me, she always just assumed period syncing was true: “I can’t pinpoint the very year of my life I was told this, but I wholeheartedly believed it to be factual – I can tell you I was today years old when I realised I needed to question it.”

And Meriam is an “avid believer” of period syncing being a thing: “Otherwise it’s incredibly coincidental that when I lived in New York with my two best friends, we all had our periods at the same time – which really helped when we all felt in the mood to sit at home in our PJs eating pizza and ice cream on a Friday night instead of going out. Also, I used to work at a company that was 95% female employees. There was always that week of the month that most people would call out sick.”

Period synching: do you come on your period at the same time as your friends?

The next step was to hit Google (obviously), but it’s a bloody minefield of conflicting information.

According to Forbes, the first academic research into period syncing was carried out by Martha McClintockin 1970. She asked 135 women to track their monthly cycle and concluded that they were syncing up.

More recent research, however, has challenged this. In 2017, period tracking app Clue teamed up with Oxford University to speak to 1,500 people who menstruate and found that it’s unlikely people disrupt each other’s menstrual cycle by being around each other.

I started getting cramps just getting my head around it all, so I decided to put some questions directly to an expert, and called upon GP Dr Houda Ounnas.

Do our periods really sync with people we live with?

“Period syncing, or the ‘McClintock Effect’, is a popular theory and many women experience it and hence believe in its validity,” Dr Ounnas tells me before expanding on the studies I’d discovered online.

“This idea was validated by the McClintock research where 135 young women living in a dorm were studied, and it concluded that women’s periods were indeed syncing up. However, that study, as you can see, used a very small ‘sample’ and also did not take into account other factors that might affect the menstrual cycle.

“Modern data since the invention of period tracking apps has given us further insights. In 2006, a review of data gathered through these apps concluded that any syncing that appeared to have happened is indeed a coincidence.”

Can periods sync with people we are emotionally close to but don’t physically see everyday?

Dr Ounnas says there isn’t enough research for a proper answer on this one, saying: “Whether our periods can be affected by people we are emotionally but not physically close to, is yet to be studied or proven.”

She did however offer an explanation for any strange coincidences: “The Cleveland Clinic has concluded that whilst science cannot confirm the period syncing effect, maybe mathematics can give an explanation. According to them, what is likely happening is that women have different cycle lengths, so will eventually coincide and diverge again. Say, if your cycle is three weeks and that of your flatmate or friend is five weeks, it’s only a matter of time before your periods coincide. You are likely to remember the times when you coincided.”

Can lockdown affect our period cycles?

“Lockdown or staying home in itself cannot affect your cycle, unless indirectly through affecting one of the actual factors that affect periods,” Dr Ounnas explains. “These include extreme stress, chronic illness, eating disorders and contraception. So, if you’ve had difficulty getting hold of your usual contraception and you had to change method, or you are under stress or any mental illness has been triggered by lockdown then, yes, the timing of your periods including seemingly the syncing might be affected.”

Basically, the jury’s still out and there’s room for a lot more research into this. That said, it does sound like the science is telling us it’s more coincidence than fact. But I for one will continue to believe that my emotional bonds are helping me keep in sync with the great women around me.