Bad diets are to blame for plummeting sperm counts: Men who eat junk food have 25% fewer swimmers than those who eat healthily, study finds

Worsening diets could be the reason behind plummeting sperm counts in men, a study has suggested.

US researchers found young men who ate a diet full of junk food had significantly less swimmers than those who ate healthily.

Lovers of pizza, fries, and sugary desserts had a 25 per cent lower sperm count than those who ate plenty of fruit, vegetables and fish.

Their sperm count – a measure of fertility – was 122million on average compared with 167million of those who ate a wholesome diet.

The findings, published in the journal JAMA Network Open, fuel fears that modern lifestyles are leading to ‘spermageddon’.

Semen quality has shown to be slowly dropping in Western countries in the last few decades. At the same time, we have become fatter and less active. 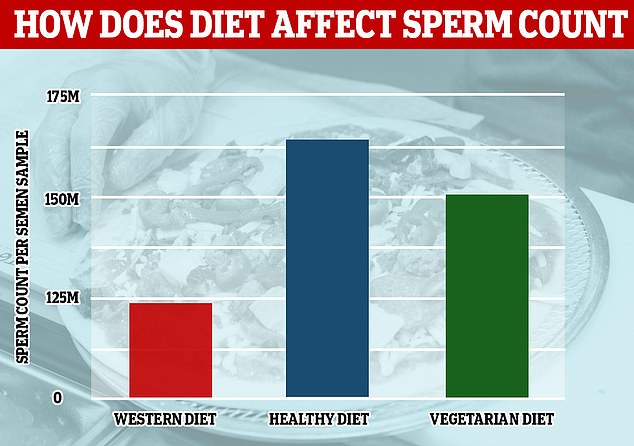 US researchers have found young men who eat a diet full of junk food have significantly lower sperm count (122million) than those who eat healthily (167million). Those who ate mostly vegetarian had a sperm count of 151million per ml

The researchers at Harvard T. H. Chan School of Public Health, Boston, wanted to delve deeper into the theory that poor diets are behind plunging sperm levels in men.

In Denmark, men are required to have a physical examination at the age of 18 to determine fitness for the military. This involves providing a semen sample.

Questionnaires collected information on the participants’ diets. Men reported how often they consumed foods from a list of 136 items in the previous three months.

Four food groups were drawn out; the Western pattern, the prudent pattern, which was the healthiest, the open-sandwich pattern, typical of a Danish person, and vegetarianlike pattern, low in meat.

Overall, the median total sperm count was 140million sperm per ml, well within the normal range of 40million to 300million, set by the World Health Organization.

HOW DID EACH DIET COMPARE?

The healthiest eaters had an average sperm count of 167million, followed by those who predominantly ate vegetarian, with 151million.

Men who filled up foods higher in calories, sugar and salt, such as pizza, fries and soda, had an average sperm count of 122million.

Their sperm count it still within ‘fertile’ boundaries, as under 20million is considered low.

One in six men (16 per cent) in the whole cohort had what was deemed a low sperm count.

Men who used recreational drugs, smoked, had a high BMI or used muscle-enhancing supplements had been excluded from the study.

The men also had blood samples drawn, from which the scientists measured levels of hormones related to fertility.

Men who rigidly ate a Western diet had higher levels of testosterone. However, the ratio of their sperm-producing hormones were off balance.

The researchers speculated that a Western diet leads to some degree of reduced activity in the hypothalamus – a region in the brain that plays a crucial role in hormone release – therefore affecting sperm production.

Joint senior authors Drs Jorge Chavarro and Neil Jørgensen wrote: ‘Our results are consistent with our hypothesis that adherence to healthy diet patterns is associated with better testicular health.’

Commenting on the findings, Allan Pacey, professor of andrology at University of Sheffield, told MailOnline: ‘The results of the study fit the general picture that has been emerging in recent years. 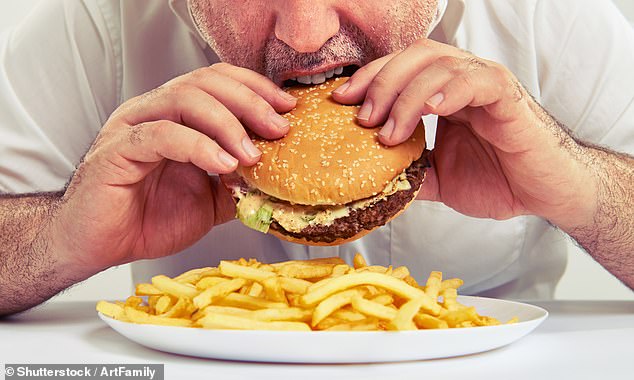 For men who ate a rigid diet of ‘Western food’, including pizza, French fries, processed meats and sugary drinks, their sperm count was 122million – 25 per cent lower than healthy eaters

‘It’s generally the case that men who eat more meat and processed food have poorer sperm quality than men who eat lots of fruit and vegetables.’

Sperm count is one of many parameters of a man’s fertility, alongside sperm motility and semen quality.

A low sperm count means that there is fewer sperm in the semen ejaculated than normal. The medical name is oligospermia.

It could affect the chances of a man becoming a father, because the odds a sperm will fertilize an egg, resulting in pregnancy, is slashed.

A low sperm count or poor sperm quality is either the cause or a contributing factor for infertility in 45 per cent of couples trying for a baby in the UK, according to the NHS.

Nevertheless, many men who have a low sperm count can still have children.

The researchers of the latest study said diet changes are a potential approach to improving reproductive outcomes in men.

Professor Pacey said men would need to commit to living healthier to reap the benefits.

‘Men should be aware that it takes three months to produce sperm. If a man alters his diet on a Friday it won’t improve his sperm by Monday,’ he said.

Adam Watkins, an assistant professor in reproductive biology, University of Nottingham, said diet is only one variable that affects sperm.

‘Obviously, diet and a healthy lifestyle (not smoking, drinking within the recommended amounts of alcohol and not taking any recreational drugs) often go hand in hand.

‘Ultimately, poor diet – and this can be both too little as well as too much of any particular food groups or nutrients – is likely to be one factor underlying the global drop in sperm quality.

‘However, the impact of this drop on male fertility is still to be clarified.’

The term ‘spermageddon’ has been bandied after studies suggest the existence of the human race is under threat due to declining sperm.

Scientists have feared humans could face extinction if sperm counts continue to drop as fast as they have done in the last four decades in Western countries.

A study by Israeli researchers in 2017 found sperm count has almost halved in men from the US, Europe and Australia since the 1970s.

They noted there was no sign of ‘levelling off’, which would suggest an ongoing trend of lowering sperm count in the future.

Dr Hagai Levine said: ‘I think the data serves as a wake up call, because I am personally worried about that [human extinction] if we do not address current environmental issues.’

WHY IS MEN’S SPERM QUALITY FALLING EVERY YEAR?

Semen quality has decreased substantially in the last few decades, by 1.8 per cent a year, according to researchers at the Sidney Kimmel Medical College in Philadelphia in 2018.

Although debate is ongoing about the underlying causes for these declines, these factors are at the forefront of scientific research:

The NHS says: ‘Eating a healthy, balanced diet and maintaining a healthy weight is essential for keeping your sperm in good condition.’

A 2017 study in the Netherlands found that men who are healthily had higher sperm concentration, total sperm count, and sperm mobility.

The Mediterranean diet, rich in healthy fats and low in sugar and red meat, has been shown to improve semen quality in studies in Germany and Spain.

There is a growing concern and evidence that environmental exposures explain the decline in sperm quality.

A study at Sao Paulo University, Brazil, showed mice exposed to toxic air had lower counts and worse quality sperm compared to those who had inhaled clean air since birth. The study looked at particulate matter (PM), tiny particles that penetrate deep into the lungs and enter the blood stream. PM is mainly released by car fumes.

Endocrine-disrupting chemicals (EDCs) are suspected to be one of the main causes of male infertility, according to The World Health Organization.

These chemicals have the ability to interfere with normal endocrine function by disrupting synthesis, secretion, transport, action or elimination of natural hormones.

EDCs are mostly man-made, found in various materials and products ranging from pesticides, food, and makeup. They are ingested or can sink into the skin. 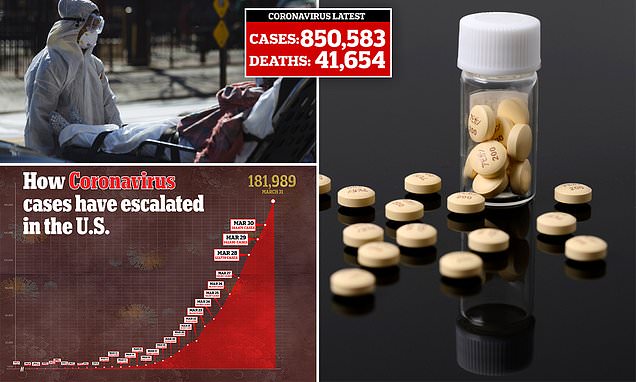