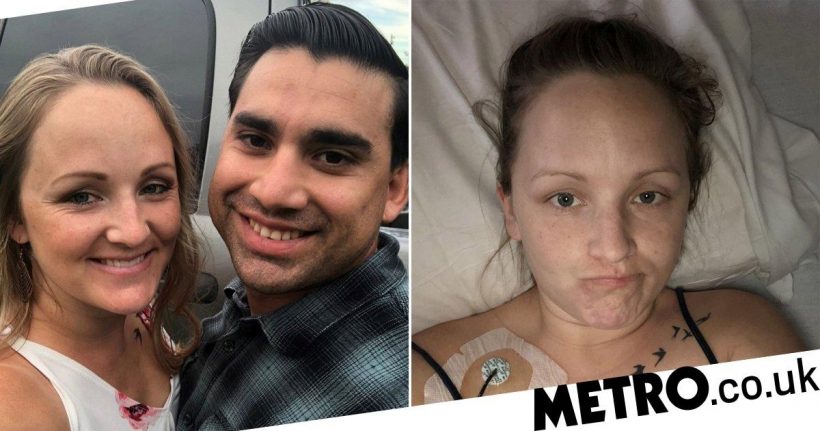 We all know about the risk of developing life-threatening condition toxic shock syndrome (TSS) from the use of tampons.

But we never think it’ll happen to us.

Greta Zarate, a 32-year-old mum of five, never knew about the symptoms of TSS, so didn’t even consider she could have it after developing flu-like symptoms on the first day of her period.

When her fever spiked and blood pressure plunged, Greta was rushed to an Intensive Care Unity where an x-ray, ultrasounds, and a CT scan failed to find the cause of her condition.

TSS had sent Greta’s body into septic shock, a stage of sepsis that causes the body’s vital organs to shut down.

The bacteria had entered the mum’s bloodstream through microscopic cuts on her vaginal wall caused by a super absorbant tampon.

Greta, of Jacksonville, North Carolina, USA, said: ‘I had heard of toxic shock syndrome but I never knew the symptoms.

‘On the first day of my period, I was feeling a little crumby. I was in bed for three days.

‘I believed I had the flu and I was treating myself with over the counter medication. I suffered all of the symptoms of TSS but I confused it for the flu – nausea and diarrhoea, dizziness, achey muscles.

‘The only thing I didn’t get was a rash which is often a symptom of it.

‘But I was getting sicker and sicker. My fever was so high, I was shaky and weak.

‘I was scared and extremely ill. I had a serious pain in my side because my spleen was swollen from trying to fight the infection.

‘The only doctors they hadn’t consulted was gynaecology and it was a blessing that one of the nurses thought that it might be toxic shock because I had my period. She put two and two together.

‘They discovered it was a staph infection in my blood after taking a vaginal swab and it stemmed from microscopic cuts in my vagina from a tampon.’

Greta was admitted to Onslow Memorial Hospital in Jacksonville on February 3 this year, where a line was inserted into her chest to administer antibiotics, fluids and morphine to fight the infection and manage her pain.

She underwent a blood transfusion to help restore her body’s red blood cells and to prevent the further spread of the infection throughout her bloodstream.

Greta was told that if she had waited another day to go to hospital, she could have lost a limb – or her life.

The mum wants to share her story because many people believe toxic shock syndrome is only caused by leaving a tampon in for too long – when in fact using ‘super’ tampons when they’re not necessary can allow bacteria to enter the body through microscopic abrasions.

Greta said: ‘There’s a misconception about toxic shock syndrome and tampons.. There’s an idea that a tampon that’s been inside you for a long period of time causes this.

‘I never knew that the size of the tampon should move with your flow. Like super tampons should only be for really heavy days, regular for normal days, and light for the end of your flow.

‘When you pull a dry tampon out of your body, it actually leaves tiny scrapes on your vaginal wall which allow bacteria to enter your bloodstream and that’s what happened to me.

‘I change my tampon every time I use the bathroom, so I knew it wasn’t because I had left it in there for a long, long time.’

Greta has made a full recovery but no longer uses tampons.

Her brush with death prompted her to undergo a genetic test for the BRCA2 gene, which increases a woman’s risk of developing ovarian and breast cancer.

Greta said: ‘My sister was 26 when she was diagnosed with breast cancer and I always planned to get the test but life got in the way.

‘I have my blood tested regularly now to make sure I don’t get sick again and my doctor asked if I might want to take the test so I did.

‘I do have the gene so now I am preparing for preventative surgeries.

‘I’m having a hysterectomy at the end of the year and a mastectomy in February.

‘Going through toxic shock made everything clearer for me.

‘I want to be around for my children for a long time. These preventative surgeries will reduce my risk of developing cancer and that’s my main priority.’

What is Toxic Shock Syndrome?

TSS (Toxic Shock Syndrome) is very rare condition caused by toxins getting into the blood stream and releasing dangerous toxins. It can affect anyone of any age but is most frequently associated with tampon use in young women. It can be fatal but it caught early it is treatable with antibiotics.

The causes of TSS

TSS is caused by bacteria called Staphylococcus. It usually lives harmlessly on the surface of the skin and but if it gets into the blood stream it can release toxins that can disturb the function of vital organs.

How to prevent TSS

According to the NHS:
– choose a tampon with the lowest absorbency suitable for your menstrual flow
– swap tampons for a sanitary towel or panty liner during your period
– wash your hands before and after inserting a tampon
– change tampons regularly never insert more than one tampon at a time
– insert a new tampon first thing before going to bed and change it first thing in the morning