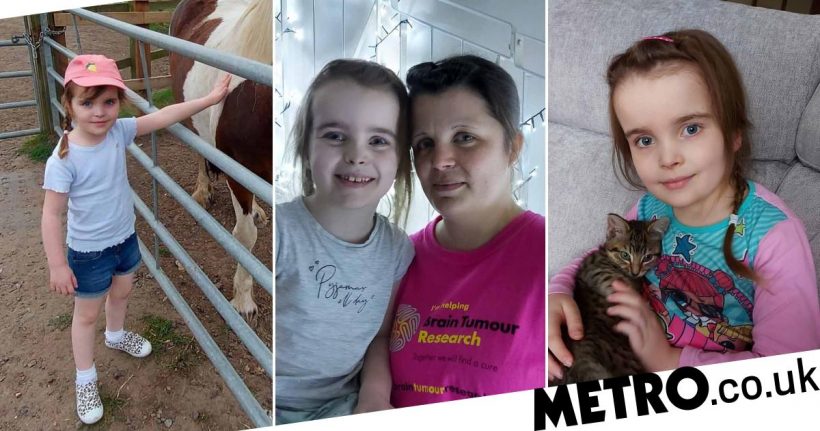 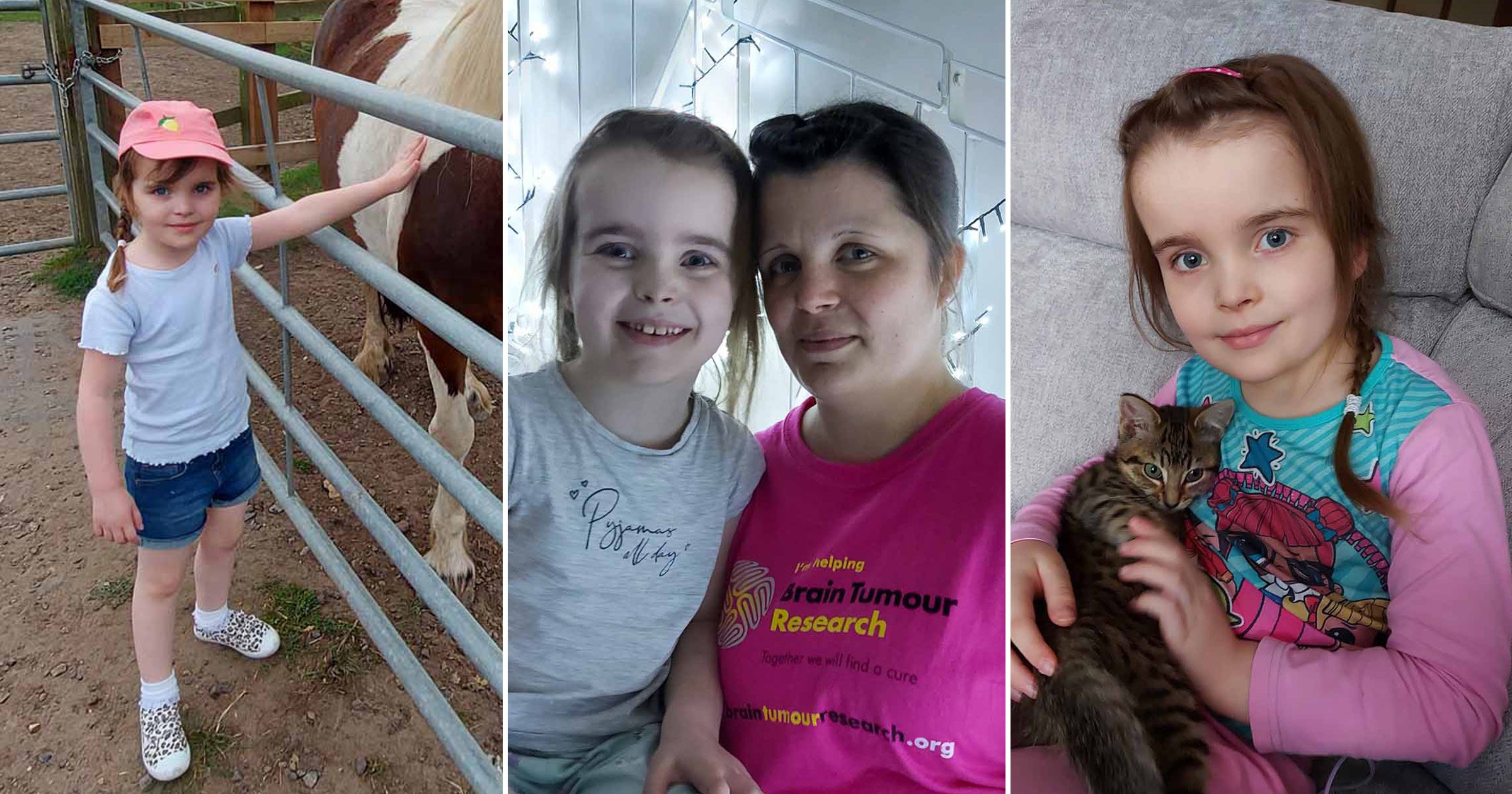 We all know that children can be clumsy and, usually, the odd fall or scrape isn’t a major cause for concern.

But, for one mum, the reason behind her six-year-old daughter bumping into things turned out to be much more serious than she could ever have imagined.

Chloe Smith, 31, a field care supervisor for a community care agency, regularly found herself having to collect her little girl, Evie-Mai, early from school – because she kept falling over, having ‘bumps and scrapes’, and hurting herself.

Although Evie-Mai had always been ‘clumsy’, in November 2020 Chloe noticed that it was getting noticeably worse.

She said: ‘I would get phone calls nearly every day from her school asking me to pick her up because she’d fallen over or hurt herself.

‘She was constantly bumping into things, so I decided to book a doctor’s appointment.’

At that point, the mum – from Lowestoft, Suffolk – was convinced that her little girl had the co-ordination disorder dyspraxia, which affects a child’s physical co-ordination and makes them appear to move clumsily.

However, when the six-year-old went for her doctor’s appointment, the GP sent the family straight to the hospital – the first sign it could be something more serious.

Chloe said: ‘We were then seen by a consultant at the hospital who said he would recommend Evie be given an appointment for an MRI scan.

‘The scan was scheduled for March 2021 and there was talk of her possibly having dyspraxia, so I wasn’t too worried.

‘When the news came through following the scan results that there was actually a mass on her brain, I was knocked for six.’

Chloe, whose partner, Gary Hale, 27, is currently on sick leave from work, said: ‘It’s every parent’s worst nightmare. Evie-Mai has been quite clumsy ever since she was a toddler, but I never suspected it could be because of something so serious.’

Evie-Mai was diagnosed with a low-grade cystic pineal tumour, which, according to cancer charity Macmillan, is a type of benign brain tumour. It starts in or around the pineal gland in the centre of the brain.

The family were blindsided by this diagnosis – although were relieved that the tumour was benign.

‘It was devastating and very hard to keep positive because of the nature of it all,’ Chloe said. ‘The potential for what could go wrong goes way beyond what’s possible to comprehend as a parent.

‘We felt a slight relief to hear that the tumour wasn’t cancerous, but we knew we had a long road ahead.’

At first, doctors monitored the tumour before booking Evie in for surgery.

Then, on September 28, 2021, Evie-Mai had a 10-hour operation at Addenbrooke’s Hospital in Cambridge to remove the mass from her brain.

Chloe said: ‘It was a long, anxious day of pacing around the waiting room, just waiting to hear how she was doing.

‘When we were told that she was finally out of surgery, Gary and I breathed out for what felt like the first time since that morning.’

Surgeons had successfully removed% of the mass, making the incision at the base of Evie-Mai’s neck – meaning most of her hair didn’t need to be shaved.

‘The surgeons were unable to remove the other five per cent,’ Chloe said. ‘So, consultants are now assessing whether Evie may need further surgery down the line.’

But for now, according to Chloe, doctors are happy with the results.

She said: ‘Seeing my daughter wake up in the hospital bed, I wanted to cry. She is such a little fighter. We had bought her some Lego to keep her entertained in hospital, but once she clapped eyes on it we couldn’t get her to rest.

‘All she wanted to do was build her Lego. I would get her to lie down for a nap, then leave the room and return only to find that she had collared a student nurse to help her build more things from the Lego.’

Evie-Mai was so resilient she was discharged from hospital just four days after her operation. Chloe has said she thanks her ‘lucky stars’ that her little girl is getting better.

Since then, the six-year-old has been recovering at home and has even been doing daily star jumps with her mum to raise money for Brain Tumour Research during November.

Chloe said: ‘Doing 100 star jumps a day to support the charity has been a lot of fun, even if I can barely walk now that the month is up!

‘After what we’ve been through, it’s good to have something positive at the end of it.

‘We’re incredibly grateful to Brain Tumour Research for their support, it’s meant the world to our family.’

Brain tumours kill more children and adults under the age of 40 than any other cancer yet, historically, just one per cent of the national spend on cancer research has been allocated to this devastating disease.

Now, Brain Tumour Research is calling for a national annual spend of £35 million in order to improve survival rates and patient outcomes, in line with other cancers such as breast cancer and leukaemia. The charity is also campaigning for greater repurposing of drugs.