The REal-time Assessment of Community Transmission-2 (REACT-2) program completed its fifth round of community surveys in the days between January 26 and February 8, 2021. The findings appear in a new article in the BMJ on February 25, 2021, showing that natural infection and vaccination together account for around 14% seropositivity rates in England at present. 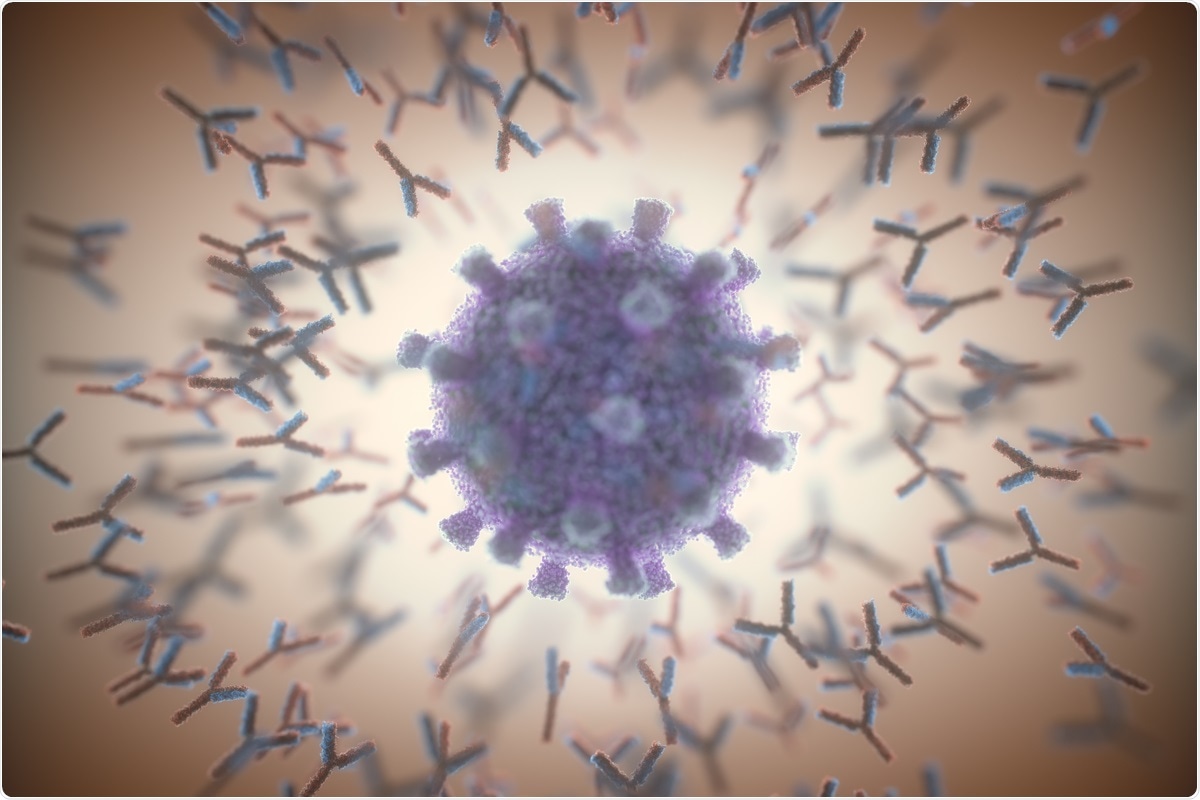 Study: Covid-19: One in seven people in England have antibodies from infection or vaccination, finds study. Image Credit: ktsdesign / Shutterstock

England has been among the countries that were badly hit by the novel coronavirus disease 2019 (COVID-19) pandemic, caused by the severe acute respiratory syndrome coronavirus 2 (SARS-CoV-2). The REACT-2 study comprises multiple rounds of community surveys that assess seropositivity rates to this virus among adults in this country.

Previous rounds showed a reduction in population-level seroprevalence after the first wave of the pandemic, from 6% in June to just over 4% in September 2020.

The second wave may be said to have begun in September, in the UK, and community spread of the virus persisted, undeterred by a second lockdown that lasted for three weeks in November. Following this, a spike in infections was observed, caused by the rise in the prevalence of the so-called UK variant (B1.1.17), which is more transmissible.

This led to yet another lockdown in January 2021. Meanwhile, the government rolled out its SARS-CoV-2 vaccination program on a prioritized basis. As of now, nearly 20 million people have been vaccinated, beginning with people 70 years old or more, health and care workers, nursing home residents, and people with various clinical indications.

Preliminary indications exist that the vaccination program is slowly reducing hospitalization and death rates and may even be bringing down viral transmission rates. After one dose of the Pfizer vaccine, infections are suggested to decline by 72%, and cases by half in those aged 80 years or more.

With a second dose, the reduction in infections rises to 98%, showing the importance of completing the regimen, especially among older people.

The highest seroprevalence among unvaccinated people was in London, at 17%, with Black and Asian minority people showing over 20% seropositivity. Among white people, it was less than half this level.

Among South Asian communities, Bangladeshi and Pakistani individuals had 25% and 22% seropositivity, respectively. African ethnicity was associated with a 23% seropositivity. Perhaps related to this, those who were part of large households, comprising seven or more people, showed a seroprevalence of 18%.

About 15% of those aged 18-29 years were seropositive, and 11% of females, compared to 9% of males. Deprivation was associated with higher seropositivity, with the most and least deprived showing a seroprevalence of 12% and 8%, respectively.

Health and care workers were found to have the highest prevalence of antibodies, among the unvaccinated group, at 22% and 24%, respectively. Those frontline workers in public transport, police and prison, education, and personal care had an incidence of 11% to 12%, compared to 8% in other workers.

The highest vaccine uptake was among those aged 80 years or more, of whom 93% took the vaccine. A third of those aged 70-79 years were vaccinated. Among health workers and care workers, 68% and 60% were vaccinated, respectively.

Two doses of the vaccine produced seropositivity in 91% of recipients. With one dose, the 21-day seroprevalence was found to be 89% overall, and 84% in those under 60 years, with weaker responses associated with advancing age. The seroprevalence increased for 4-5 weeks following vaccination and then leveled off.

At all ages, people who had been infected with the virus before being vaccinated had higher seroprevalence rates.  Live virus neutralization tests showed positive results in 29/30 results with antibody levels above 50 U/mL and a positive LFIA test.

With 92% of people saying they were willing to take the vaccine, the results were encouraging. Almost all older (aged 80 years or more) people showed confidence, compared to 83% of those aged 18-29 years. Females were marginally less willing, at 91%, relative to males, at 94%.

Vaccine hesitancy was attributed to uncertainty about the effects and adverse effects, the desire to have a child, and fears about infertility, allergies or other medical illnesses resulting from the vaccine.

Even as the seroprevalence of SARS-CoV-2 antibodies rises, inequities and discrepancies continue, with Black and Asian ethnicities being observed to have lower seropositivity rates. The same was true of more deprived localities, inhabitants of London and younger people between 18 and 29 years.

High vaccine confidence is a reassuring sign, with female concerns about future fertility and plans for conception, and general fears about the potential adverse effects in the long term, being the primary contributors.

The generally high seroprevalence after two vaccine doses in all age groups showed vaccine efficacy. However, weaker responses were seen in those aged 80 years or over, relative to those under 50 years. This may be accounted for by the higher chances of prior infection with the virus among younger people or weakened immunity among older people.

Earlier reports show that antibodies decline by about six months after infection. The study, however, shows high antibody responses in those who received a single dose of the vaccine after prior natural infection. The antibody titers are, indeed, more than comparable to that achieved by a prime-boost vaccine regimen.

In view of this, and because high levels of pre-existing antibodies in such individuals following the first dose could cause unnecessary reactions, some scientists opine that this group could be given only one dose, especially for younger people.

Such an approach has been used by France. Alternatively, the second dose could be given after a longer delay. Further studies are required to determine how long such immunity lasts and the optimum timing of the two doses.