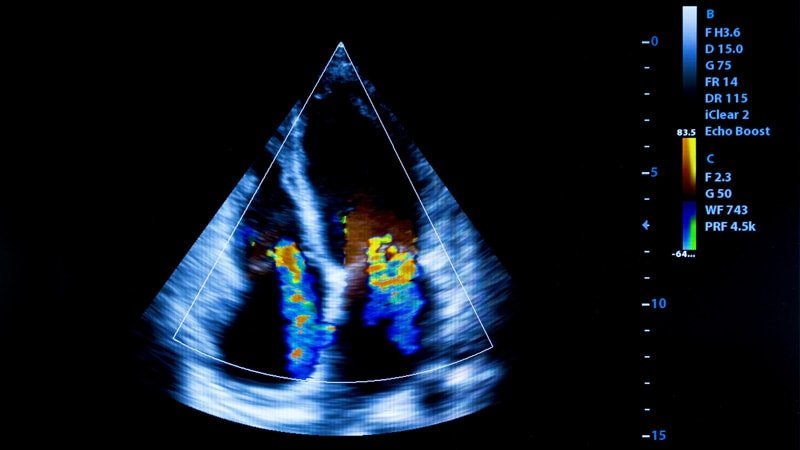 Addition of echocardiogram measurement of biventricular dysfunction improved the accuracy of prognosis among patients with cardiac shock (CS) in the cardiac intensive care unit (CICU).

In patients in the CICU with cardiac shock, biventricular dysfunction (BVD) as assessed using transthoracic echocardiography improves clinical risk stratification when combined with the Society for Cardiovascular Angiography and Interventions (SCAI) shock stage.

No improvements in risk stratification was seen with patients with left or right ventricular systolic dysfunction (LVSD or RVSD) alone, according to an article published in the journal Chest.

Ventricular systolic dysfunction is commonly seen in patients who have suffered cardiac shock, most often on the left side. Although echocardiography is often performed on these patients during diagnosis, previous studies looking at ventricular dysfunction used invasive hemodynamic parameters, which made it challenging to incorporate their findings into general CICU practice.

Although treatment of acute myocardial infarction and heart failure has improved greatly, particularly with the implementation of percutaneous coronary intervention (primary PCI) for ST-segment elevation MI (STEMI). This has reduced the rate of future heart failure, but cardiac shock can occur before or after the procedure, with a 30-day mortality of 30%-40%. This outcome hasn’t improved in the last 20 years.

Efforts to improve cardiac shock outcomes through percutaneous mechanical circulatory support devices have been hindered by the fact that CS patients are heterogeneous, and prognosis may depend on a range of factors.

SCAI was developed as a five-stage classification system for CS to improve communication of patient status, as well as to improve differentiation among patients participation in clinical trials. It does not include measures of ventricular dysfunction.

The new work adds an additional layer to the SCAI shock stage. “Adding echocardiography allows discrimination between levels of risk for each SCAI stage,” said David Baran, MD, who was asked for comment. Baran was the lead author on the original SCAI study and is system director of advanced heart failure at Sentara Heart Hospital, as well as a professor of medicine at Eastern Virginia Medical School, Norfolk, Virginia.

The work also underscores the value of repeated measures of prognosis during a patient’s stay in the ICU. “If a patient is not improving, it may prompt a consideration of whether transfer or consultation with a tertiary center may be of value. Conversely, if a patient doesn’t have high-risk features and is responding to therapy, it is reassuring to have data supporting low mortality with that care plan,” said Baran.

The study may be biased, since not every patient undergoes an echocardiogram. Still, “the authors make a convincing case that biventricular dysfunction is a powerful negative marker across the spectrum of SCAI stages,” said Baran.

Echocardiography is simple and generally available, and some are even portable and used with a smartphone. But patient body size interferes with echocardiography, as can the presence of a ventilator or multiple surgical dressings. “The key advantage of echo is that it is completely noninvasive and can be brought to the patient in the ICU, unlike other testing which involves moving the patient to the testing environment,” said Baran.

The researchers analyzed data from 3158 patients admitted to the CICU at the Mayo Clinic Hospital St. Mary’s Campus, 51.8% of whom had acute coronary syndromes. They defined LVSD as a left ventricular ejection fraction less than 40%, and RVSD as at least moderate systolic dysfunction determined by semi-quantitative measurement. BVD constituted the presence of both LVSD and RVSD. They examined the association of in-hospital mortality with these parameters combined with SCAI stage.

Patients with BVD had greater in-hospital mortality than those without ventricular dysfunction (aOR, 1.815; P = .0023), but other between-group comparisons were not significant.

The researchers performed a classification and regression tree (CART) analysis using left ventricular ejection fraction (LVEF) and semi-quantitative RVSD. It found that RVSD was a better predictor of in-hospital mortality than LVSD, and the best cutoff for LVSD was different among patients with RVSD and patients without RVSD.

The study authors have disclosed no relevant financial relationships.