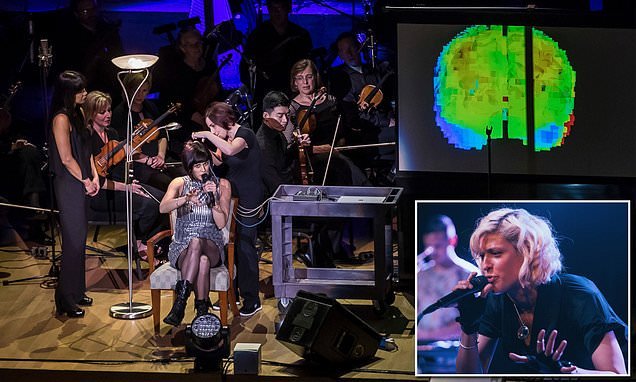 ‘I wanted to remove love from my brain’: Rapper tries neuroscience experiment to rewire her neurons with musical chimes after her decade-long messy breakup

Minneapolis rapper Dessa’s career started taking off when she was just 21, thanks to a breakup that that inspired so many of her songs.

But by the time she was 36, and had spent over a decade alternately dating or collaborating with her ex, Dessa was tired having the breakup on her mind.

So, following in the footsteps of Kate Winslet in Eternal Sunshine Of The Spotless Mind, Dessa sought to ‘take out’ the part of her brain that was dedicated to loving a person she was no longer with.

In reality, getting past her last relationships would not involve ‘zapping’ memories’ (as in Eternal Sunshine of the Spotless Mind), nor like lobotomizing herself.

But you really can see the neural signature of being in love in the brain, and you can reprogram that circuit using, in Dessa’s case, a technique called neurofeedback.

In her new book, My Own Devices, Dessa describes doing exactly that, and how getting hooked up to electrodes, and watching her own brain respond to light flashes, beeps and whistles helped her retrain her brain to stop fixating on love. 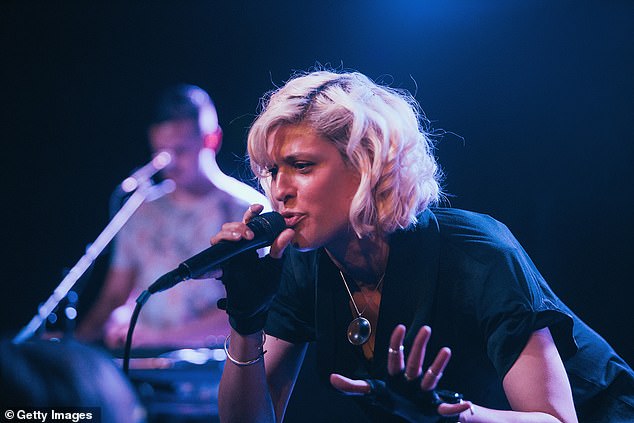 Dessa, 37, is a Minneapolis rapper who has struggled with heartbreak after her relationships with a fellow rapper ended more than 15 years ago. Finally, seeing what love looked like in her brain and undergoing neurofeedback training has helped her break the spell, she says

We talk about many of our emotions as being ‘of the heart,’ but really the heart is just a muscle pumping blood through our veins.

It’s the brain that manages our experiences and perceptions of emotions.

Specifically, love makes its home in the temporal lobe, which spans between the two temples and is key to the way we process sensory information.

One of its components is the limbic system, which is primarily responsible for emotions, most notably love and fear. The system’s pieces include the hippocampus, hypothalamus, and the amygdala, which acts like the brain’s emotional-processing command center. 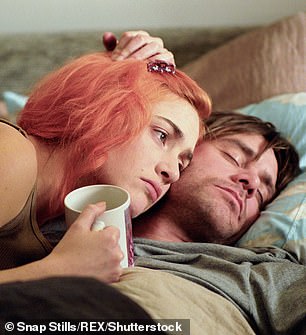 In the cult classic film, Eternal Sunshine of the Spotless Mind, Kate Winslet’s character (left) tries to have her ex (played by Jim Carrrey, right) erased from her memory

Dr Helen Fisher, a biological anthropologist at Rutgers University, breaks down the experience of love in the brain into three parts: lust, attraction and attachment.

Each of these are associated with different hormones, which act like biological text messages from the brain to the body. Lust comes with testosterone (for men) and estrogen (for women), attraction with dopamine, norepinephrine and serotonin (the ‘reward’ hormones) and attachment comes with oxytocin and vasopressin (the ‘feel good,’ warm and fuzzy hormones).

Dr Fisher was the first person to use functional magnetic resonance imaging (fMRI) to watch the activity of these hormones in the brain, and other research revealed which brain regions light up when a person thinks of their loved one.

As it turns out, the attachment phase involves the brain activity of dependence, which looks essentially the same whether you are dependent upon a person or a drug.

For Dessa, that neural ‘dependence’ lingered for over a decade after the initial breakup, like a drawn out love-withdrawal.

Dessa fell in love with the man she calls ‘X’ more than a decade ago, when she was just under 21.

They were working together in the same rap group, and have continued to do so on and off since their initial breakup, about a year after they started dating.

Despite their best intentions to transition to collaborators, their relationship has followed the typical on-again-off-again trajectory, and it was becoming a problem in Dessa’s personal life, and in the efforts she and X made to work together. 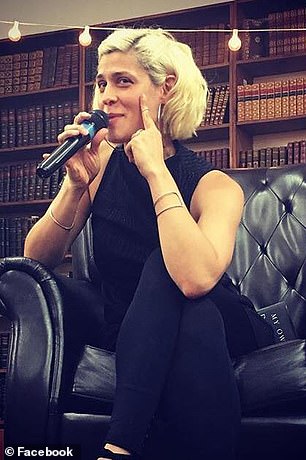 She saw Dr Fisher’s TED Talk by chance, and it sparked not only some hope, but Dessa’s intellectual curiosity.

‘It hadn’t occurred to me that their might be biomarkers that correspond to these feelings,’ Dessa said.

‘I was excited by the idea of being able to capture some definitive evidence of this feeling that had dogged me for so long.’

Dessa went in for an FMRIs at the University of Minnesota. When the scientists there showed her pictures of her ex, X, sure enough, all of those love areas lit up.

‘I thought, “if I can find love in my brain, maybe I can find some intervention that can remove it,”‘ Dessa said.

‘CUT IT OUT’: HOW A RAPPER SOUGHT TO ‘REMOVE’ LOVE FROM HER BRAIN

Neurofeedback therapy is not new – it’s been around since the 1960s – but it remains experimental and studies of its efficacy yield mixed results.

It has shown the most promise in treating ADHD and, more recently, PTSD.

Each session of neurofeedback therapy is meant to subconsciously train the brain by rewarding ‘healthy’ neural activity.

‘It’s not like math where you memorize facts and manipulate concepts,’ Dessa said, explaining her experience.

‘Instead a person sits ther connected by a series of a electrodes which are connected to a real-time visualization of the workings of your brain.

‘So it’s measuring my brainwaves through my bone and hair and skin and I can see, in real time, which parts of my brain are hyperactive and hypoactive or operating in a relatively normal way for a 36.5-year-old, right-handed female patient.’

When Dessa and Penijean saw the ‘healthy’ activity, displayed in green on the flat screen, the software Penijean had programmed played a chime, a cue to draw Dessa’s attention to the fact that whatever was going on in the romantic centers of her brain at that moment was good.

This is basically a form of classical conditioning, as pioneered by Ivan Pavlov in experiments with dogs in 1902 – but higher tech and more finely tuned to an individual’s brain activity.

‘When Pavlov’s dogs salivated, they didn’t do so because they were trained cognitively, it was just pairing the stimuli,’ explains Dessa, who has a deep curiousity for science, but no formal education in it.

‘That kind of unconscious learning is the same idea that underlies neurofeedback: if attention is called to the moment in which the brain is operating in a desirable way, it helps the brain get trained to do that,’ Dessa said. 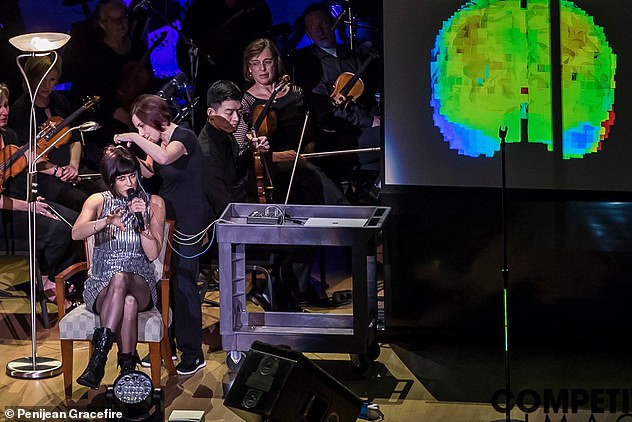 Penijean Gracefire (center) places electrodes that monitor brain activity (right) on Dessa’s (left) head during a 2017 performance with the Minnesota Orchestra, just as she did during neurofeedback treatments

LIFE AFTER LOVE: HOW TONES AND ELECTRODES CHANGED DESSA’S BRAIN

Dessa went to nine sessions with Penijean in 2017.

So Penijean would recalibrate the software, so that Dessa was only getting the reward chime when her brain activity was operating even more optimally, signaling she might be more resilient to romantic relationships.

‘The bar is set a little higher as your brain gets better at the tasks its asked to do,’ she said.

After those nine sessions, Dessa went back to the University of Minnesota to test her training.

Again, she underwent Dr Fisher’s fMRI protocol. Again she was shown pictures of her ex-boyfriend.

But this time, ‘there was a really distinct difference in the way that my brain operated before and after,’ she said.

Those romantic centers weren’t lighting up like fireworks the way they had before – and for over a decade before that.

And Dessa felt the difference, too – and, actually, it was nothing like Eternal Sunshine of the Spotless Mind.

‘It’s not like the memories were gone, or blunted,’ Dessa said, her brain was just better at coping at them.

Dessa feels like her brain-training worked, and on the fMRI looked like it worked, but science nerd that she is, the rapper and author acknowledges that her experience is hardly proof that neurofeedback is a cure for a broken heart.

‘This is not a double-blinded, randomized trial,’ she said.

‘It’s not an experiment, just a curious person trying to understand.’