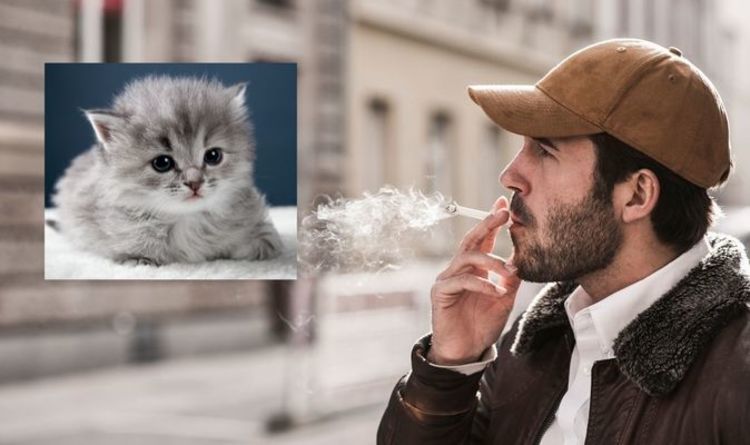 NHS on the dangers of second-hand smoke and smoking indoors

A new study has revealed that a quarter of smokers in the UK are unaware of the risk it poses to their pets. This comes alongside reports that nearly 40 percent of dog and cat owners have seen their pets fall ill as a direct consequence of second hand smoke. Tobacco smoke contains carcinogens, a group of chemicals that can cause cancer. Inhaling second hand smoke can result in cancers in the lungs, mouth and nose.

The research was conducted by MIST, a UK company dealing in e cigarettes and other tobacco substitutes.

Founder and CEO Fred Cassman said: “Judging from the survey data, there is a clear lack of awareness on this issue.

“We want to share the findings so we can encourage Brits to ditch cigarettes in 2022, and to learn more about the damage tobacco smoke causes not only to ourselves, but to our loyal and beloved pets.”

Some of the statistics collected by MIST were combined with other surveys to produce estimates of how many pets are affected across the country.

The Office of National Statistics reports that 6.9 million people in the UK are smokers.

Statistica claims that 59 percent of people in the UK own pets.

Assuming that smokers are as likely to own pets as anyone else, they estimate there are roughly four million pets in smoking households.

The survey also recorded whether smokers would be willing to quit if they knew it was harming their pets.

This suggests that raising awareness of the harm from second hand smoke could encourage more people to kick the habit.

If you want help to stop smoking your GP can put you in touch with NHS approved services to help you quit.

Two out of five responded that they spent more money on cigarettes than on their pet each month.

A study published in the journal Tobacco Use Insights found that five percent of the NHS budget is spent on managing the direct consequences of smoking.

Indirect costs were not included in this estimate, making the real cost higher.

Smoking is a common risk factor for a large number of metabolic conditions.

Cardiovascular disease and complications such as heart attacks and strokes are made more likely by regular smoking.

Second hand smoke in the workplace or home has been linked to a 25-30 percent increased risk of heart disease.