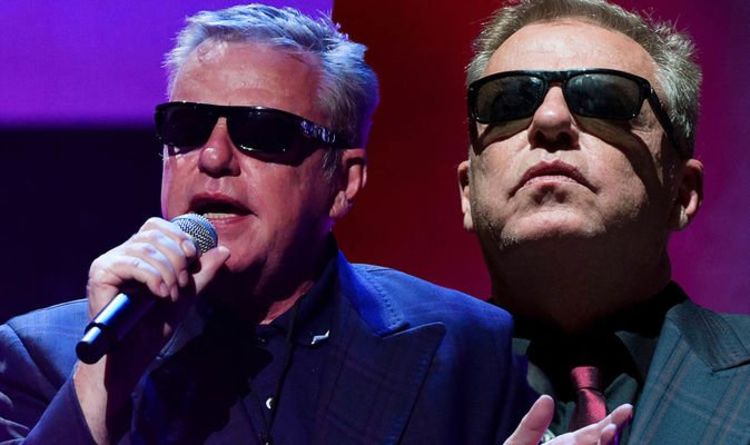 The father-of-two married wife Bette Bright back when he was just 21 years old and after many years together, the pair prepared to battle breast cancer as Bette, whose real name is Anne, found a lump in her breast. Then in October 2012, disaster struck again for Suggs family, as his beloved sister-in-law Alanah died within a couple months of being diagnosed with pancreatic cancer. With the disease affecting two of the most important women in his life, Suggs not only became more concerned about his own health, but started to act, raising funds to help others affected by the cancer.

“It was a real shocker,” Suggs said after he had found out about his wife’s diagnosis.

“All the horror and the process that you go through, I can understand now.

“And it happens to so many people. It wasn’t so long ago that you heard that word cancer and you were dead, your life was finished.

“Thankfully, in more fortunate cases, that has changed, but that’s a day I’ll never forget. It was absolutely terrifying.”

In light of Bette’s diagnosis, Suggs booked himself a health MOT with his doctor, which checked all of his vital organs and what he referred to as “man-things”.

To the singer’s delight, his own health check was given the all clear, despite his rock and roll lifestyle habits of smoking and drinking a bit too much.

“I was sweating as the doctor went down the list. When he got to the liver I was thinking, ‘Oh, here we go’ and he said it was all fine.

“All fine! So I went on the lash for three days.”

On Bette’s recovery from breast cancer, Sugg’s sister-in-law Alanah was diagnosed with pancreatic cancer, and after her death at the age of 60, Sugg’s turned his grief into a “war”.

“It’s very hard to diagnose so more often than not people with pancreatic cancer are way down the line and that’s the tragedy of it,” Sugg’s explained to the Telegraph back in 2015.

“You think, ‘Oh my God, that’s such a virulent form’ because they die so quickly, when in fact it’s not really, it’s just they’ve been diagnosed so late. It can be misdiagnosed as all sorts of things.”

“We’d seen what Anne had been through and our immediate reaction was that, however bad it is, Alanah would get through it because we’re such strong people.

“But she didn’t. It was a big shock to all of us.” Suggs added after him and Bette spent what turned out to be some of Alanah’s last days with her in Italy.

In light of losing Alanah, Sugg organised a fundraising event for Pancreatic Cancer UK. Called An Evening with Suggs and Friends, with two more events that followed.

“We are thrashing around in the dark when it comes to pancreatic cancer but there is work on lots of fronts. Symptoms usually appear late so screening would be a major breakthrough,” Suggs explained in terms of what he hoped the money raised would go towards.

“We saw some of the research, what’s happening to some of the money we’ve been raising, and it has been really remarkable,” he added.

Cancer, no matter what form it takes, is a condition where cells in a specific part of the body grow and reproduce uncontrollably. These cancerous cells can invade and destroy surrounding healthy tissue, including organs.

The NHS explains that a whopping one in two people will develop some form of cancer during their lifetime, the most common being breast cancer, lung cancer, prostate cancer and bowel cancer.

Changes to your body’s normal processes or unusual, unexplained symptoms can sometimes be an early sign of cancer. Symptoms that need to be checked by a doctor include:

The NHS goes on to explain that although cancer is unpreventable, there are simply changes to your lifestyle that can be made to help reduce your risk of developing the disease. These include: