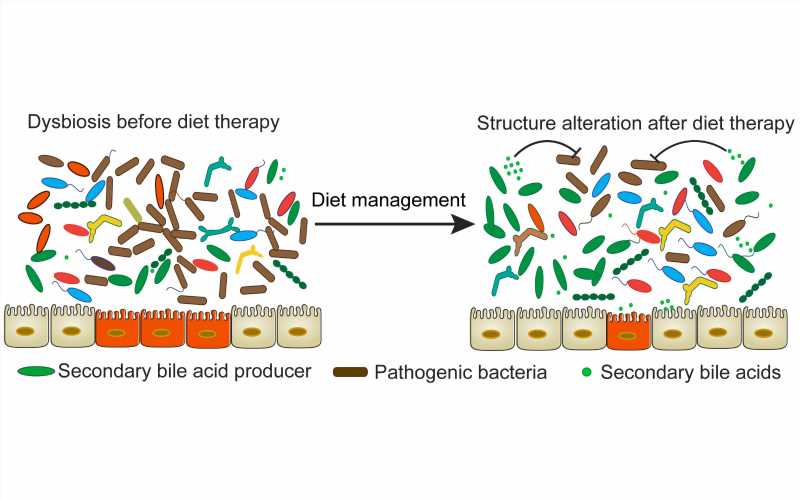 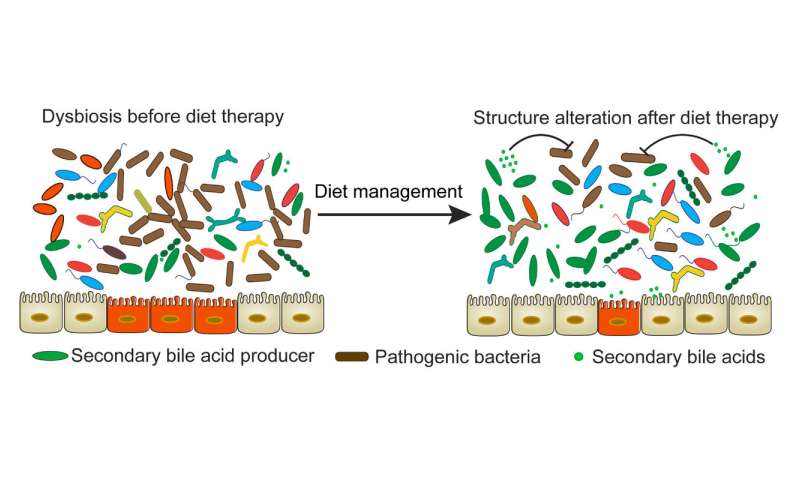 Much remains mysterious about the factors influencing human inflammatory bowel disease (IBD), but one aspect that has emerged as a key contributor is the gut microbiome, the collection of microorganisms dwelling in the intestines.

Diet is known to profoundly affect this microbial community, and special diets have been used as therapies for intestinal disorders including Crohn’s disease in people. They’re also commonly used in dogs, which can develop a chronic intestinal disease that mirrors many features of Crohn’s.

In a new study published in the journal Microbiome, researchers from the University of Pennsylvania investigated the connection between a prescription diet, the gut microbiome, and a successful entry into disease remission in pet dogs receiving treatment at Penn Vet’s Ryan Veterinary Hospital. They discovered key features of the microbiome and associated metabolic products that appeared only in dogs that entered disease remission. A type of bacteria that produces these compounds, known as secondary bile acids, alleviated disease in a mouse model. And comparing the impact of diet on the dog’s microbiome with that seen during diet therapy in children with Crohn’s, the study team found notable similarities.

“The bacteria in the gut are known to be a really important factor in tipping the scales toward disease,” says Daniel Beiting, senior author on the work and an assistant professor in Penn’s School of Veterinary Medicine. “And the environmental factor that seems to contribute the most to rapid changes in the microbiome is what you eat. Given that dogs’ microbiomes are extremely similar to those of humans, we thought this was an intriguing model to ask, ‘Could diet be impacting this disease through an impact on the microbiome?'”

Researchers collected stool samples at the outset of the study and at different times as the sick dogs began a prescription diet to treat their disease. Using advanced genetic sequencing techniques, the team developed a catalog of the microbes present in the stool, a stand-in for the animals’ gut microbiome. They also collected information about the metabolic products present in the stool.

“That gives us a functional read-out of the microbiome,” says Beiting. “It doesn’t just tell us who is there but also what they’re doing.”

Twenty of the 29 sick dogs quickly entered remission. Together, the genomic and metabolite analyses revealed characteristic changes in these dogs. In particular, those that responded well to the diet tended to have an increase in metabolites known as secondary bile acids. These are produced when certain microbes in the gut consume the bile that is released by the liver.

One of these “good” microbes that can give rise to secondary bile acids was the bacterium Clostridium hiranonis, which the researchers found in greater numbers in dogs that went into remission. Dogs that responded well to the diet also had fewer harmful bacteria, such as Escherichia coli and Clostridium perfringens after starting treatment.

To learn more about what these apparent markers of remission were doing, the team took bacteria from the dogs—both when they were sick and after they had entered remission—and grew them in the lab.

“Having these organisms gave us the opportunity to test our hypothesis about what actually causes remission,” says Shuai Wang, a postdoc at Penn Vet and the study’s lead author.

Taking the secondary bile acids found to be associated with remission, the researchers applied them to the E. coli and C. perfringens grown from the sick dogs and found the bile acids inhibited their growth. They also gave C. hiranonis from the dogs to mice with a form of inflammatory bowel disorder to see if the bacteria could reduce disease in a different animal model.

“This allowed us to show that secondary bile acids and C. hiranonis aren’t just biomarkers of remission,” says Beiting, “they can actually effect change. Bile acids can block the growth of pathogens, and C. hiranonis can improve gut health in mice.”

As a final step, the researchers looked to a dataset taken from children with Crohn’s disease who were treated with a specialized liquid diet known as exclusive enteral nutrition. Youngsters who responded to the therapy had an increase in numbers of the bacteria species Clostridium scindens, which, like C. hiranonis, is a potent producer of secondary bile acids.

The authors say the findings offer hope for better dietary therapies for IBD, perhaps ones that deliver “good” bacteria such as C. scindens or C. hiranonis while suppressing disease-associated species.