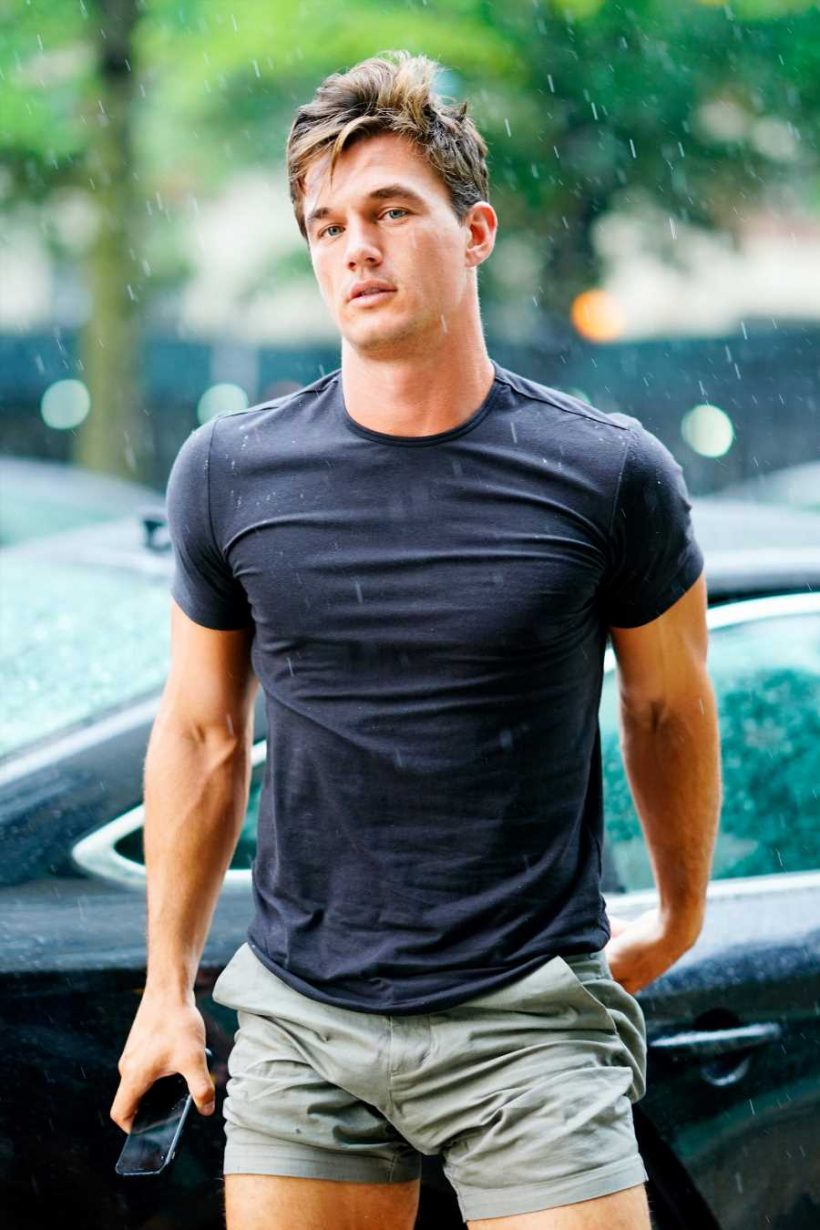 If you follow Bachelorette  runner-up (and breakout hottie) Tyler Cameron on social media, chances are you’ve seen him sweat.

The former college football player/reality star/model/contractor is set to run his first-ever 26.2-miler, the Bank of America Chicago Marathon, on Sunday to raise money for his food charity. And less than a month later, he’ll give his second race a go when he participates in the TCS New York City Marathon on Nov. 3.

PEOPLE caught up with Cameron, 26, to learn more about his motivations for racing, why he loves running and how he’s trained for the intense challenge.

What inspired you to start running?
When my dad got sick, I started getting everybody in my family to go on group runs. It started once a week on like a Thursday, and we’d go for 30 minutes and just meet for 30 minutes, and then go do like an hour. We just keep increasing, and I really enjoyed doing it. It was good family time, good time with my friends and we all got better together. And when I came up to New York City, I needed to get back into running. I was talking to [my friend Matt James] about his group runs that he did. And I was like, “You know what? It might be a good idea to try one in the city and see how it goes.” And so we did one, and it was just truly incredible how many people came out, and then so we just kept doing them.

The community that we built was incredible. So many friendships developed from that. I mean, everyone had something in common there, which was they’re all fans of the show. And so, you get a bunch of girls, 90 girls together, they can talk Bachelor all day. So friendships were naturally created through that, and it was just tons of fun. You hear a lot of inspiring stories. There was one girl came out in jeans, and not even running shoes but like normal shoes, and she came out and ran a mile and a half with us and she’s never ran a mile before because she was a smoker. And it was just like all these incredible stories and people talked to me about running with their dad, so it was really awesome.

Then we got a Nike running coach involved, and she was a big help. And then she challenged me to the Chicago marathon. I was like, “Yeah, you know what? I’ll give it a shot.” And now I’ve been training for that. And then the New York Road Runners hit me up, and they asked me about if I was interested in New York. I was like, “I don’t know, I might doing Chicago.” Everyone I talked to in New York and even outside of New York, was like, “New York Marathon is the most fun. It’s the best. You got to do it.” So I was like, “Screw it. I’m going to try and do both.” So now I’m signed up for two. That’ll be an interesting couple of weeks.

That has to take such a toll on your body. How have you been training?
I just ran 20 miles on Sunday. My feet still hurt. So I’m learning how much of a toll it does really take.

Wow. How does training for a marathon differ from the type of stuff you were doing before as a college athlete, and just staying in shape?

So prior to this, I was always running sprints. Football was all about sprinting and lifting heavy weights and getting as strong as you can be. So I always focus on that. So when I came to running marathons, I had a hard time with running two miles. But just being consistent and persistent with what I was doing, I was able to grow and grow and grow, and it’s amazing if you just stay consistent with something that you’re doing, how much you can improve just repeating it and just staying dedicated to what you’re doing.

What is it about running that you love? Do you get that runner’s high?
Clearing your mind and just pushing yourself to distances you’ve never been before. Also, seeing your improvements — and it happens so drastically when you first start. It’s fun. It keeps you wanting to do more and more and more. So it’s been a whole new world I never thought I would enjoy that I truly love and enjoy doing now.

What advice would you have for someone who maybe hasn’t always been a runner, but is looking to get into it?
Running is something that you can’t get discouraged at early. I mean, I had a hard time running two miles, one mile, you know, and it was hard. It hurt. But as long as you keep doing it, and you stay persistent and keep it up, you will cover so much ground, you can get so much better, and it really becomes something that you see your improvements, and it becomes so much fun. So just the hardest part is just getting started and showing up. And if you can do that, you beat most of the battle.

What are you most excited about for the Chicago marathon specifically, and that route?
I’m excited to just hit the pavement with my friends in that environment. I’ve got some guys from the show that I’m doing it with. I’ve got Matt doing it with me. So it’s going to be a lot of fun. It’s going to be definitely difficult. It’s going to be a big accomplishment once we get past that finish line. It’s a huge feat for anyone that does it. And ask me a year ago if I could ever run a marathon, I’d tell you, you’re crazy. So I’m excited to get to this point, and try and push through it and make it happen.

Well, once you’re done running, you have to get some pizza obviously.
Oh, I’ma be eating like crazy. I’ve never been to Chicago … so you might giving me some food recommendations.

Pequod’s is my favorite deep-dish hands down. It’s less known. It’s less hyped, but it’s amazing. But you have to wait so long for the pizza to come out. That’s the one thing. It’s not like New York, where you can just grab a slice. It takes like an hour, but it’s worth the wait. Anyway … who else from The Bachelor is running it with you?
So we got Dustin [Kendrick], we got Garrett [Powell] and Matteo [Valles]. Diggy Moreland. And then in New York, Andi Dorfman‘s running it, so maybe I can try and keep up with her, but that girl can go. … She’s bad-ass.

Is anyone from your family coming to cheer you on on the sidelines? Is your dad coming to New York?
I don’t know. I’m working on it. I know I want to get him up here to see the leaves change. So that’s priority number one with him right now.

I hope you’ll indulge me in some Bachelor questions. What are your thoughts on Pilot Pete?
He’s got an amazing heart, just an amazing family. So well-deserving. I mean, the kid’s a total knockout. I love the kid. I hope this journey for him is an amazing one. I hope he finds that person for him. Yeah, there’s not enough good things I can say about that dude. He’s incredible.

Have you been watching Dancing with the Stars at all? Have you been in touch with Hannah? She’s been crushing it.
I wished her happy birthday, but I have watched a little bit from the snippets that I’ve seen on my phone. I’ve been moving, I don’t have a TV yet, so I haven’t really been able to watch it at all, but what I’ve seen she’s been killing it and doing well, so happy for her.

There’s been a lot of headlines lately about you being single. What is your relationship status?

I mean, I’m at the point right now where I don’t really talk about what I’m doing relationship-wise. What’s out there is out there. I’m just focusing on myself right now.

Do you get a lot of like DMs from fans trying to slide in?
Yeah, there’s quite a few.

I’m sure our readers will love that advice, and you’ll be getting even more DMs.
Good cookie advice, and recommendations, and the cookies you’re eating.