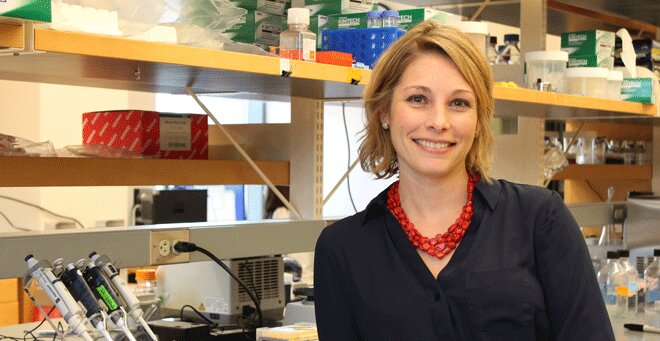 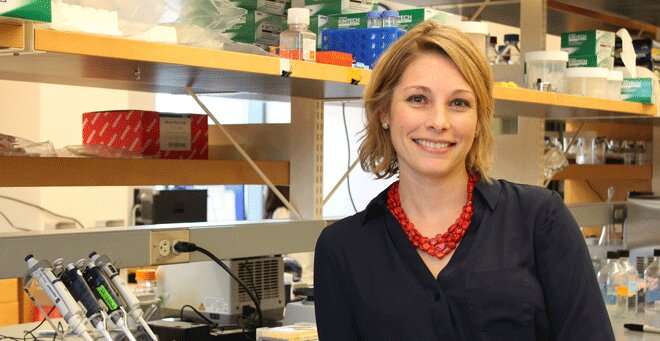 New research by Dorothy P. Schafer, Ph.D., at the University of Massachusetts Medical School, reveals the molecular process in which synaptic connections in the brain are damaged in multiple sclerosis and how this contributes to neurodegenerative symptoms. The paper, published in Immunity, also shows how gene therapy may be used to preserve neural circuits and protect against vision loss in the disease.

These findings suggest a path for developing therapies that may protect synapses from the damaging effects of MS and could be broadly applicable to other neurodegenerative disorders, according to Dr. Schafer, assistant professor of neurobiology, and Sebastian Werneburg, Ph.D., a postdoctoral fellow in the Schafer lab.

“Most MS research and FDA-approved treatments focus on demyelination and axon death,” said Schafer. “Far less is known about what happens to the synaptic connections between neurons, which has proven to be a key aspect of neurodegeneration likely leading to cognitive decline in other diseases such as Alzheimer’s disease.”

Multiple sclerosis is a neurological disease of the central nervous system affecting more than 2 million people worldwide. The disease involves an abnormal response of the body’s peripheral immune system against the brain, spinal cord and optic nerves, which damages the fatty substance surrounding nerve fibers called myelin. Recurrent episodes of inflammation result in demyelination. As the myelin is stripped away, the nerve fibers are exposed to inflammatory attacks from the immune system and the transmission of nerve signals within the central nervous system are altered or stopped completely. A small subset of MS patients experience chronic progressive neurodegenerative symptoms accompanied by significant synaptic loss and central nervous system atrophy. This version of the disease is called progressive MS.

FDA-approved medications for treating MS have been developed to limit and reduce the number of relapses, which delay progression of the disease and minimize demyelination, but there is no cure for the disease and patients are still left with disability. Current therapies work to inhibit peripheral immune attack of the central nervous system and inflammatory demyelination, but the neurodegenerative aspects of the disease have proven harder to decelerate, particularly for patients with progressive MS.

Vison loss is one of the most common symptoms of MS and is often one of the first that patients notice. Problems with vision result from damage to the optic nerve that connects the eye to the brain or from lack of coordination in the eye muscle.

“The retinogeniculate system, which comprises neurons that extend their axons via the optic nerve to the thalamus in the brain, is an ideal model for investigating MS because it’s easy to access for therapeutic intervention, subtle changes can be readily detected and the visional pathway is affected in almost half of all patients with the disease,” said Dr. Werneburg.

Profound synaptic loss was observed in animal models as microglia engulfed and eliminated presynaptic connections. Microglia are the immune cells of the central nervous system and are emerging as key players in regulating neural circuit structure in health and disease. One of the vast number of functions microglia perform in the brain is similar to the role macrophages perform in the immune system: clearing cellular decay and dead neurons from tissue.

“We found the protein C3 in abundance at synapses,” said Werneburg.

C3 is not normally found in adult brain tissue. C3 protein usually only shows up in neural tissue during the developmental stages of the brain when synapses are being pruned. Synaptic pruning eliminates weak or unused synapsis as the brain matures to help efficiency and conserve energy.

In the case of demyelinating disease, it is not known why C3 is being produced and activated. This complement protein binds to synapses, sending the signal to microglia that the otherwise healthy-seeming synapse should be eliminated. This leads microglia to attack synapses.

Schafer, in collaboration with Guangping Gao, Ph.D., the Penelope Booth Rockwell Professor in Biomedical Research, professor of microbiology & physiological systems, director of the UMMS Horae Gene Therapy Center and Viral Vector Core, and co-director of the Li Weibo Institute of Rare Disease, used a gene therapy approach and adeno-associated virus to deliver Crry, an inhibitor of C3, specifically to synapses in the visual system while leaving the rest of the brain untouched, to see if synapses could be spared and vision preserved. Crry is a natural inhibitor of complement proteins such as C3. These regulators help protect cells or tissue from unwanted attack by the immune system.

After injection of the AAV into the circuit, Crry localized to synapses and successfully preserved them by binding to C3 so microglia couldn’t damage them.

“As a result of this inhibition, we saw improved visional function in mice,” said Werneburg.

Schafer said the protective effects of the AAV-delivered inhibitor were specific to the visual circuit. “It’s possible that therapies targeting different circuits of the brain can be used to protect against synaptic damage in other neurodegenerative diseases such as Alzheimer’s.”