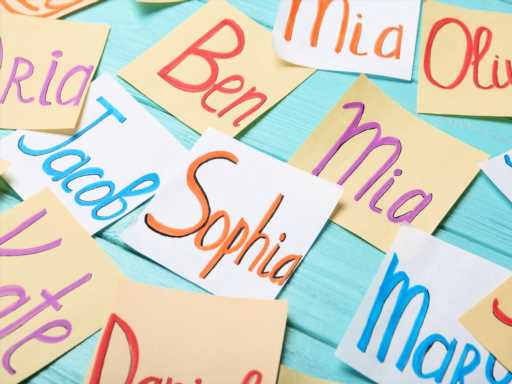 Every year since the 1880s, the U.S. Social Security Administration has compiled a list of the top 1000 most popular baby names. And, proving that classics never die, there are still names at the top of today’s popularity charts that were there way back when: James and Elizabeth, for example.

But here come the babies of Generation Alpha. Encompassing anyone born between 2010-2025, these kiddos (and kiddos-to-be) are part of an unprecedented push for name individuality. In a society where the world feels a lot smaller thanks to the Internet, parents want their baby name to stand out in a sea of Noahs and Emmas.

There are a lot of Alpha babies — according to The Annie E. Casey Foundation and social analyst Mark McCrindle, a new member of Gen Alpha is born every nine seconds in the United States, and 2.5 million are born weekly across the globe. By 2025, when the last of the Gen Alpha babies are born, they’ll outnumber the Baby Boomers. They are going to be a racially and ethnically diverse, tech-savvy, and highly educated group … with names as bold and daring as they are.

The Listophile team found that since the year 2000, there’s been an over 71% rise in the popularity of unisex baby names, and there are several possible reasons for this. First of all, gender-neutral names allow for whatever gender expression the child chooses later on in life. And secondly, studies have shown that having a gender-neutral or ambiguous name may make women more likely to be treated as equals, or even promoted, in the workplace.

A few of the most popular gender neutral baby names right now:

There’s just something stately sounding about a last-name first name — and parents of Gen Alpha babies agree. This trend itself isn’t new by any means. “It started in Tudor England, when parents chose surnames of nobility,” psychology professor and author of The Great Big Book of Baby Names
, Dr. Cleveland Evans, told the Chicago Tribune. “Then, in early America, parents used presidents’ names like Jefferson and war heroes’ names like (Francis) Marion.”

However, surnames as first names are experiencing a surge thanks to the new generation, especially since many of these can overlap into the gender neutral name territory, making it a baby naming double whammy. We already saw Palmer and Lennox, two of the fastest-rising in popularity, on the gender neutral name list — and here are a few of the other current Gen Alpha favorites:

In many cases, it’s not so much the name itself that’s changing — it’s the “spellyng.” Parents are steadily replacing vowels with the letter i, and c with the letter k. (Kan we kall out the Kardashian influence for this one?) Some of the most popular baby names with amended spellings are:

We’re Freshening Up Old Classics with Their “Nickname” Versions

Fun fact: the term “nickname” comes from the Middle English word eke, which meant “also” – and was combined with the word name to literally mean “other name.” In time, ekename morphed into nickname. And that brings us to today, when Generation Alpha babies are being named the diminutive versions of longer traditional names (which, again, can tend to skew gender-neutral), like:

Think fashion and decor trends don’t carry over into baby names? Think again! As “cottagecore” – or the wholesome and idealized rural living aesthetic — takes hold in our homes, it also shows up in popular Generation Alpha baby names with a decidedly homespun feel:

Maybe the pandemic and its resulting loss of ability to travel has something to do with this trend — or maybe we just love showing how worldly we are via our baby name choices. Whatever the reason, Generation Alpha baby names are going global, and here are a few of the most popular geographical names:

We’re Going Back to Nature

Hippie parents of the ’60s and ’70s aren’t the only ones feeling at one with nature through their baby name choices! There has been a huge resurgence of the popularity of nature names recently, bolstered by celebrity baby name choices like Stormi (daughter of Kylie Jenner). Some of the most popular right now include:

What do the parents of Generation Alpha babies have in common with the Puritans? A love of virtue names and everything they symbolize! While the Puritans may have favored monikers like Patience, which isn’t on the current list of the fastest risers, here are a few that are:

In the same vein as virtue names, word names are also making a big impact on Generation Alpha baby naming trends — after all, what better way to manifest strength, positivity, and boldness than to name our kids after words that literally mean such things? Here are a few that are making waves:

Baby names that sound like they’d be just as fitting for great-Grandma? Yes please! In fact, this phenomenon is so prevalent in the baby naming world that it has its own name: The Hundred-Year Rule. Basically, according to trends, names on the popularity chart tend to come back in vogue 100 years down the road. This is reflected in some of the most popular vintage baby names right now:

How do you breathe new Gen Alpha life into Oakley? Turn it into Oakleigh or Oaklee! Adding a Y or a K isn’t the only popular switcharoo happening in baby names nowadays — we’re changing the endings, too. It’s interesting to note that this trend is mostly in girls’ names; for boys, adding -ton or -son (i.e., Kashton) is all the rage. Here are some of the most prevalent right now:

… Z baby names, that is (because everybody knows parents don’t sleep). For Generation Alpha babies, it’s all about standing out — and what better way to do that than with a name that starts with probably the rarest letter? A few Z names that are big hits:

We’re Crazy About Our “X”

This one’s for the boys — whose current naming trends reflect a big love for the letter X! Some of the fastest-rising boy names incorporating the beloved X include:

And Now for the Bad News …

Eventually, what goes up must come down — even baby names — and these are the ones that have experienced the highest rates of decline in recent years. Some are obvious (looking at you, Karen and Jeffrey), but some are just … fading out for no apparent reason. We’re not saying you shouldn’t name your kid these; we’re just saying that if you do, they’ll be outliers among their trendily-named Gen Alpha peers, is all. Here are the names experiencing the most downward popularity slide:

Don’t feel too bad if your kid’s name is declining in popularity — it’ll be all the rage again in 100 years. In the meantime, all the Sevyns, Oaklyns, Kyros and Zhuris can have their moment in the baby name spotlight.

To see the full findings of the study, check out Listophile.

From Illusia to Zillion, here are a few of the most unique celebrity baby names.