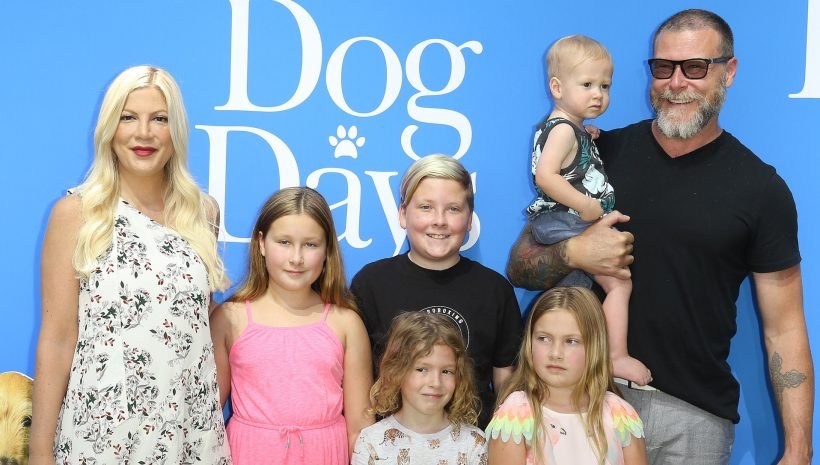 Body shaming is never OK, but it’s especially upsetting and cruel when trolls direct their comments at children. So when body shamers targeted Tori Spelling and Dean McDermott’s young kids, McDermott understandably had a strong reaction which he shared on social media.

The negative comments were posted on Instagram after Spelling shared a sweet photo of the family at the premiere of A Dog’s Way Home with her former Beverly Hills, 90210 co-star Ian Ziering and his family. “I can’t believe @ianziering and I once played BH teens Steve Sanders and Donna Martin and now we are married to the loves of our lives and between us have 7 kiddos who all adore each other!” the actor wrote in the caption.

I can’t believe @ianziering and I once played BH teens Steve Sanders and Donna Martin and now we are married to the loves of our lives and between us have 7 kiddos who all adore each other! . Tonight, @erinziering and I hosted a screening of @adogswayhome for @sonypictures at @sohohouse fir family and friends and a massive kiddo takeover. . What a special movie! It’ll make you laugh, cry, and go Ahhhh many times. We all loved it! What a special night (even in this crazy LA rain)

Our response was 100 percent “Awww!” but trolls decided to take aim at the appearances of Spelling and McDermott’s kids, who range in age from 22 months to 11-years-old. One user commented that it looks like the children “feed and clothe themselves,” and others even wrote that the kids are “overweight.”

McDermott was not here for the bullying of his kids, so he posted a comment of his own — and it was totally on point. “I am absolutely horrified and disgusted by the comments being left about my children. Body shaming and bullying my children??!! What is wrong with you people??!!” the actor responded. “For your information, we went from a long day at school to the movie. And I don’t know any child that is NOT disheveled at the end of the day. Not to mention that just before this picture was taken, they were wrestling and running around with all the other kids that were at the movie.”

“So I apologize we didn’t get the iron and steamer out to make them perfect for you. Their kids. They’re messy and dirty. That’s what they do,” McDermott continued as he totally schooled the shamers. “And what’s wrong with shopping at Target??!! Over half of America shops there. The way they grow out of clothing so quickly is astounding. Are we supposed to shop at Gucci?? These are kids folks. Messy stinky little bundles of fun, laughter and love.”

It’s not surprising that the actor felt protective of his kids after seeing such cruel, unnecessary comments (what parent wouldn’t?), but we also love that he and Spelling are raising their kids to be so down-to-earth and normal. While there is of course nothing wrong with splurging on your kids’ clothes if you enjoy it, it’s refreshing to see celebrities who shop at Target like the rest of us. And, as McDermott pointed out, kids are meant to run around and play — anyone who has ever raised a child or, you know, spent a few hours in the presence of a child knows that.

The only people in this situation who should be ashamed are the ones who think it’s OK to bully kids from behind the safety of a screen.