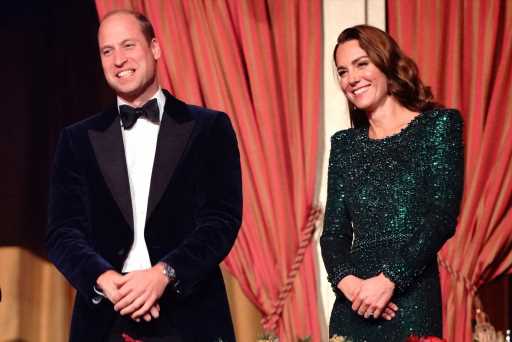 Waking up extra early to see what Santa brought is a tradition around the world — even for royal children. A source told Us Weekly on Monday that Prince William and Kate Middleton’s kids, Prince George, 8, Princess Charlotte, 6, and Prince Louis, 3, woke up at 5 a.m. to look under the tree.  What they found was a slight break from their parents’ traditional rules. The source says the Duke and Duchess let this one thing “slide” at Christmastime.

“While Kate and William avoid overly spoiling the children, they let the rule slide at Christmas,” the insider said. This is completely understandable! The holiday season is the perfect time to shower your kids with gifts and not feel guilty about it.

According to the source, George and Louis both received outdoor camping gear, including a camping kit, tent, walkie talkies, and a flashlight for George and a climbing frame for Louis. Charlotte received a children’s video camera, which see reportedly “adores.” All three kids also opened games and books on Christmas morning.

The little ones weren’t the only ones spoiled this Christmas. Prince William also surprised Kate with a bracelet. “After a busy year, William wanted to make this Christmas extra special for Kate and surprised her with a beautiful bracelet,” said the source.

The family of 5 enjoyed a quiet Christmas at their countryside home, Anmer Hall, in Norfolk England. As Queen Elizabeth II decided to cancel her usual Christmas party in Sandringham due to the recent rise in COVID-19 cases.

After opening presents, the Duchess cooked lunch for the family. The insider said, “Kate cooked a traditional Christmas feast for lunch – turkey, stuffing, pigs in blankets, ham, roast potatoes and all the trimmings.” She also “used her creative skills to decorate the table with candles, evergreen branches and cones as centerpieces,” while the kids helped “bake a chocolate Christmas log and apple pie for dessert, but the highlight was making a gingerbread house, covered in their favorite sweets.”

The family also enjoyed Christmas crackers and set off poppers filled with confetti, paper crowns, and jokes, before video chatting with the queen, Prince Charles, and other royal relatives.

It sounds like a great Christmas morning was had by all!