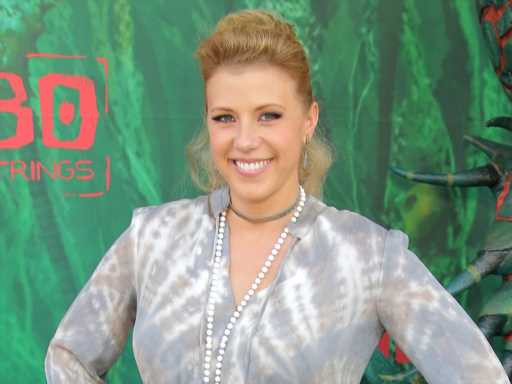 Jodie Sweetin recently married her longtime love of five years, Mescal Wasilewski, on July 30 in Malibu, California, less than a year since they got engaged. While it was a small ceremony comprised of friends, family, and her former Full House co-stars, two very special people were there throughout it all. Her daughters Zoie Herpin, 14, and Beatrix Sweetin-Coyle, 11, stood beside her as her beautiful, loving bridesmaids throughout the ceremony.

“They’re so excited to stand up there with me. They’re getting nails done, and all this stuff, and they just are so happy to see me happy, and they love this little unit that we have. So, they’ve been very much a part of it,” she told People.

The girls donned blue dresses, with Zoie wearing a muted blue and Beatrix wearing a more vibrant piece. Along with their stunning dresses, Zoie actually chose Sweetin’s Lili Bridal wedding gown. She told People, “Zoie was the one that picked it off the rack, and it was the first one I tried on, and it was stunning and gorgeous.”

The Full House star added, “I asked them the other day if they would like to make some toasts, Bea immediately jumped on it and wrote something, and Zoie’s like, ‘Yeah, yeah, I’ll get to it,’ because she’s 14.”

Before you go, click here to see all the celebrities who have pulled off secret weddings.</strong