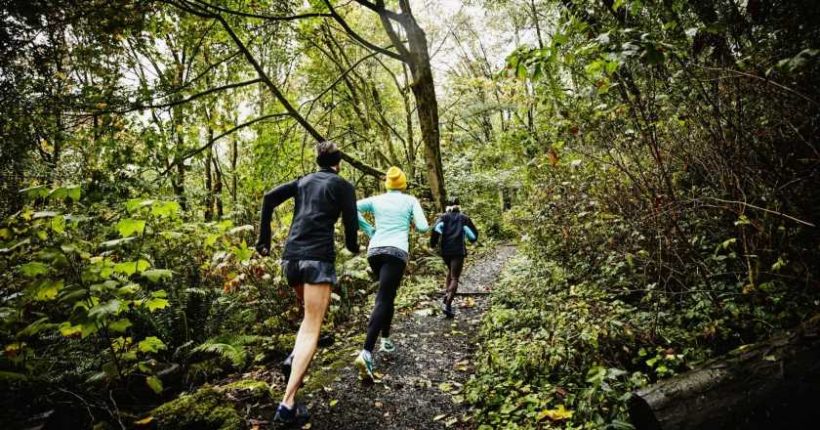 Top runner and ski mountaineer Henriette Albon reveals how you can leave the concrete jungle and start your trail running journey.

Trail running is becoming an increasingly popular way to escape the fast pace of modern life. Since the mid-1990s, its popularity is estimated to have grown at a rate of 15% each year to around 20 million trail runners worldwide.

Henriette Albon first started trail running thanks to an interest in orienteering. Despite living in a city, she remembers joining her parents for weekends away to do races. When Albon moved to London, she continued orienteering until she decided she no longer wanted to read a map and started entering trail races.

Now, the 31-year-old Norwegian is a top trail runner, notching up some increasingly impressive finishes on the international circuit. As an Arc’teryx trail running ambassador, she is also passionate about getting more people involved in running off-road – no matter where they live.

What is trail running, and how does it differ from regular jogging?

“The most basic thing is that in road running you are faced with one surface,” Albon explains. “In trail running you will have rougher, more involved terrain – from hard-packed trails to more technical trails.”

This means you might be running on grass, mud, sand or track – any unpaved surface. The change in terrain means it is often hillier and slower than road running. But while the challenge is greater, so is the reward.

“Trail running is a bit more involved but the benefit is that you’re out in nature,” Albon says. “You’re moving in nicer terrain, which can help to relax your body and mind in a different way to moving on paved roads with skyscrapers around you.”

How do I start trail running if I live in a city?

The best place to start is your local park. “They’re your ‘go to’,” Albon says. “Jog down the road, go to your local park and explore the trails. Go off the beaten track and find those little paths on the side. Most importantly, have fun.”

As a beginner, the easiest trails to start on are ones that aren’t too technical. “There are loads of really nice, fun paths that are well-groomed and harder packed and that’s probably where I’d start off,” she explains. “But you can try out different stuff depending on what you have access to.”

Henriette came to trail running having spent years doing orienteering. She ditched the maps in favour of running freely outside.

To find the best routes there are plenty of apps. AllTrails gives you access to a database of trail maps including crowdsourced reviews and images, while running app Strava includes heat maps so you can see where people run and filter routes based on paved surfaces and trails.

For most people in the city, you’ll need to mix it up to include both paved and unpaved surfaces in a run. “You might end up doing a run to a park, doing a trail loop and then running back. That’s a nice way to get some efficient distance on paved roads and then get into nature for a bit before you head back home,” Albon explains.

How to run a faster 5k: can walking more make you a better runner?

Another way to start trail running is through Parkrun – free, weekly events that take place in parks and open spaces across the UK. Some have paved courses, but there are plenty that involve gravel, grass and track. “Parkrun is a great place to start,” Albon adds. “That’s trail running. It doesn’t need to be up and down really fancy mountains; it’s just a fun way of getting out onto some green stuff.”

If you’re a beginner, you should aim for two runs a week, incorporating some run/walks within that. She recommends trying five minutes of running and two or three minutes of walking.

How do I get stronger at trail running?

Like any activity, it takes time to build up your skills and fitness. For road running and trail running, the general rule of thumb is to increase mileage by roughly 10% a week.

It’s also important to incorporate some speed work – even if you think you will be running slower. “A lot of people automatically think they don’t need to work on their speed on the flat if they are training for trails,” Albon explains. “But ideally one session a week should be intervals on flat trails in your local park.”

You also need to get used to hills. If you’re living in a city, that might be tough but Albon says that treadmill sessions are absolutely a good way to get that training in: “Incline treadmills are a great way of targeting the right muscle groups and building the muscular strength and endurance that’s required,” she adds. Try working up to a 10% gradient, or something that you can run on steadily.

How to strength train for trail running

On Strong Women, we’re big advocates for runners dedicating at least one workout a week to strength training, but for trail running, you don’t necessarily need to schlep to the gym to use the leg press. “I’m a huge fan of bodyweight exercises,” Albon says.

For a simple yet effective workout, she recommends:

After the 10th squat jump, go back to the box step-ups and do the whole lot three times.

“A lot of people say they don’t have time, but if you do 20 minutes of strength a week you will see huge benefits. A little goes a long way – don’t think it’s a waste of time because it really does make a difference.”

Hiking is also a good low-impact way to get used to the trails. When you’re ready, you can enter a race or head out of the city with some friends to enjoy some group runs on new trails.

What kit do I need to go trail running?

The most important thing is that you don’t need to buy a whole new kit to make the transition from road running to trail running. However, you should consider buying a new pair of trainers.

In trail running, there are different shoes depending on the terrain – so you need to assess what type of trail you will be running on. Then you can go shopping.

There’s nothing better than a day in the country, gently jogging with a load of good snacks, says Albon.

“This is important to help prevent injury,” Albon says, having just supported the launch of the new Norvan LD 3 trail runner. “If you’re running on slippery wet rocks and muddy trails you need a good pair of trail shoes because you risk slipping over and hurting yourself. I’ve seen a lot of people run in road trainers in those types of conditions and it’s not going to be enjoyable”.

However, if it’s a light, hard-packed trail and it’s not muddy, then you may be able to use road shoes – especially if you’re running on paved roads back and forth from a park.

Finally, if you’re looking to spend a little longer on the trails, you should also consider a trail running vest like this one from Nike or The North Face. Fuelling is key, and you need somewhere to carry snacks, water, cash and a printed map.

“Going out in nature with some snacks and a drink and enjoying yourself as you move at a purposeful pace is really nice,” Albon adds. So, what are you waiting for?

Looking to spend more time outdoors? Join us at this year’s Strong Women Treks in Epping and Surrey.