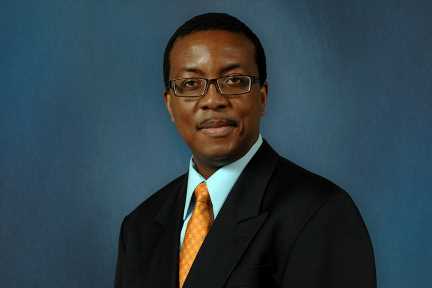 Anthony Odibo, MD, an internationally respected maternal-fetal medicine expert, has been named director of the Division of Maternal-Fetal Medicine & Ultrasound in the Department of Obstetrics & Gynecology at Washington University School of Medicine in St. Louis. He also has been appointed vice chair of obstetrics in the department.

“Dr. Odibo is best known for his clinical expertise in maternal-fetal medicine, with a specialized focus in fetal care,” said Dineo Khabele, MD, the Mitchell and Elaine Yanow Professor and head of the Department of Obstetrics & Gynecology. “He is also known for his prolific research and for being an incredible mentor and role model for the next generation. We are delighted to welcome him back to the department.”

In his research, Odibo evaluates the effectiveness of fetal surgeries and diagnostic techniques before birth. His most recent research focuses on the use of microvascular imaging tools and biomarkers in the blood to determine whether smoking and abnormalities in the smallest blood vessels of the placenta cause fetal growth restriction. The ultimate goal of this research is to design a reliable method to predict poor fetal growth earlier in pregnancy so that physicians can intervene sooner to help prevent stillbirth, cesarean delivery, low oxygen levels and other adverse outcomes.

Odibo also has an active clinical practice with a focus on prenatal diagnosis and the treatment of abnormalities in utero, such as twin-twin transfusion and urinary tract obstruction.

“It is an honor returning to Washington University, an institution known for academic rigor,” Odibo said. “I hope to maintain the excellence fostered under the leadership of Dr. Khabele and to help the department continue to grow our division as a world leader in maternal and fetal care.”

Before joining the University of South Florida, Odibo served on the faculties of Washington University and the University of Pennsylvania. In his previous position at Washington University, Odibo served as director of the Division of Ultrasound & Genetics and vice chair for women’s and fetal imaging. As vice chair, Odibo oversaw the strategic activities relating to ultrasound in the maternal-fetal medicine and reproductive endocrinology and infertility divisions. In his new role as vice chair for obstetrics, he will focus on strategic initiatives for the department as they relate to obstetric services. These will include representing the department head as needed, for activities related to obstetrical services at St. Louis Children’s Hospital, Missouri Baptist Medical Center and Barnes-Jewish Hospital.

Odibo is editor-in-chief for the journal Ultrasound in Obstetrics & Gynecology. Previously, he served as deputy chief editor for Acta Obstetricia et Gynecologica Scandinavica and as editor of BJOG: An International Journal of Obstetrics & Gynaecology.