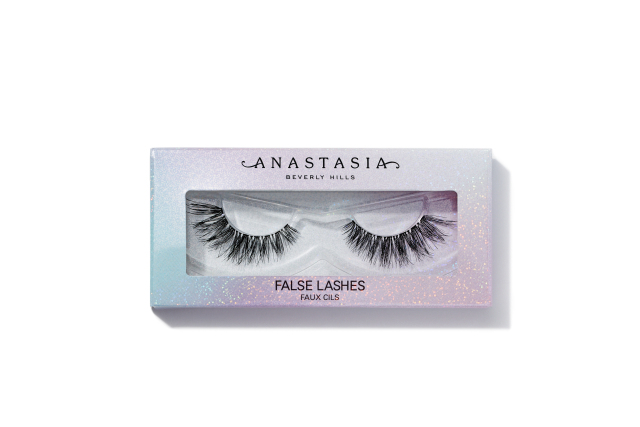 Anastasia Beverly Hills' Halloween trick or treat comes in the form of a new category.
The billion-dollar beauty brand announced today that it is launching false eyelashes — its first time officially playing in the lash space. Priced at $12, the lashes come in six styles: Eleganza, Gorgina, So Hollywood, Domina, Dreamy and Fashion. Each pair is vegan and can be worn up to 20 times either individually or stacked for a thicker effect.
False lashes have been having a moment. WWD previously reported that sales of false lashes were experiencing growth in the mass market. In October 2018, false lashes had reached nearly $270 million in sales.
Anastasia Beverly Hills' false lashes are available starting today on the brand's web site and sephora.com. The launch comes just in time for Halloween and just a few days after brand founder Anastasia Soare threw her annual Halloween party. Beauty influencers such as Patrick Starrr and Diana Madison attended the weekend fete.
See pictures from Soare's Halloween party below.

What an incredible party ❤️so amazing to have all our ABH friends and family to celebrate Halloween ? the most creative work / makeup and costumes ❤️ you all were incredible!! Love you all ?thank you @alyssamarieartistry for doing my makeup ❤️ every year !!! #anastasiabeverlyhills #abhhalloween

Another one! It’s our annual photo together as we don’t take pics the rest of the year. Which makes no sense because we’re in a studio every week ? Beyond happy with how our Halloween party turned out. I loved meeting so many of you for the first time ? and seeing my friends again. Love you guys ??

More from WWD.com:
False Lashes Are Having a Moment, According to Sales Data
Oversize Accessories Have Captured the Instagram Zeitgeist
Meet the Woman Sourcing Sold-out Designer Goods for the Fashion Set
Source: Read Full Article