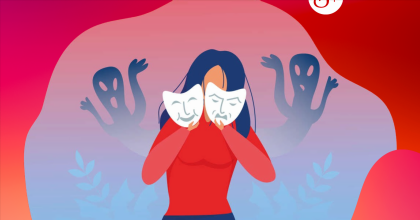 Nobody enjoys feeling like a fraud at work, but have you ever stopped to ask why those feelings take root in the first place? Radhika Sanghani builds the case against imposter syndrome.

When Kike Oniwinde won an internship at a prestigious investment bank straight out of university, she knew she deserved it. She’d always worked hard, leaving school with A*s and had even trained as an athlete to the point where she represented Great Britain in javelin throwing. She was used to seeing herself as successful and knew she was good enough to be working at the bank. That wasn’t even a question.

There wasn’t one specific thing that made her feel this way; rather, a series of small moments that all contributed to her growing lack of confidence. “I’d come from a state school in east London, where I rarely felt out of place. But in the workplace, I felt no one looked like me. My ‘buddy’ was a white guy who went to my uni, but that was our only correlation – our backgrounds were really different. The buddy system was meant to give support, but it didn’t give me any.

“I felt like I was thrown in at the deep end. I was so out of my comfort zone. With some of the topics of conversation, I didn’t know what to say – about skiing or restaurants I’d never been to. I moved on to one desk, and the intern who was leaving was a young white man. He’d banter with everyone and they loved him. When I got there, the banter wasn’t happening. I didn’t get it. But I could see the difference in how they reacted to him and to me.”

These are all the symptoms of imposter syndrome – the unmistakable feeling that you don’t belong or deserve to be where you are. It was all so uncomfortable for Oniwinde that she left banking soon after her internship ended and went on to become an entrepreneur. Now the founder and CEO of BYP Network, an organisation on a mission to promote equity in the workplace, she realises that her imposter syndrome wasn’t actually her fault. “I was one of the only Black people on the floor. I didn’t feel comfortable because I wasn’t made to feel comfortable. I knew I was good enough to be there; I had to work twice as hard to even get in that room. There was a perception whereby people looked at me and didn’t really expect much. The only people who looked like me were the cleaners and security guards.”

Looking back, Oniwinde believes that so much of how she felt was down to the intersection of race, class and gender. Part of it was due to the lack of understanding and support from the workplace she was in, but the other part came down to the fact that she was breaking new ground – and with that came a certain pressure. “I felt I was doing it for everyone who looks like me. Because you’re so hyper-visible, you feel extra pressure. And then you put pressure on yourself for feeling uncomfortable.”

The term “imposter syndrome” was first coined in 1978 by two US psychologists who called it the “imposter phenomenon”. They defined it as feeling like a fraud in spite of obvious success and high achievement and observed that it mostly affected women. Over the years, more studies have been completed and the term imposter syndrome has become part of the arc of self-improvement, with employees even running courses on how to banish imposter syndrome in the workplace. A 2018 study of 3,000 adults in the UK by OnePoll found the syndrome was widespread, with 66% of women and 56% of men claiming they had experienced it over the previous 12 months. A recent KPMG study found 75% of women can relate to imposter syndrome, while a number of high-profile women – including Lady Gaga, Michelle Obama and Serena Williams – have spoken out about feeling fraudulent, despite their quantifiable success.

But just how useful is it to encourage women to label themselves as suffering with imposter syndrome? For years, we’ve been urging women to overcome the self-doubt that’s holding them back in their careers, when actually, it isn’t always their fault. For people like Oniwinde, imposter syndrome wasn’t to do with her lack of self-belief; it was to do with the fact that she was the only person representing a certain group (or groups) and not receiving any support.

“Imposter syndrome for me is going somewhere you haven’t been before – or where someone like you hasn’t been before. You wouldn’t have it if there were people who looked like you or acted like you or had your beliefs,” explains Melanie Eusebe, professor of leadership and management at Hull University, as well as the diversity and inclusion lead at consultancy firm Accenture. She believes that employers have a responsibility to support people who find themselves in that position so that they can help reduce the impact of imposter syndrome on an employee’s performance and career progression. In a worst-case scenario, imposter syndrome can stop people from flourishing and growing in their careers, leading individuals – or whole groups – to quit. “We have to stop looking at the underrepresented groups as the perpetrators – like they’ve done something wrong and have to fix it. Companies need to look at the bigger problem and trend. They’re responsible for their cultures.”

The most important thing in this new post-imposter syndrome age is exactly that: we need to shift our focus from the individual to the systems and institutions that must change and recognise their failure to bring people in. As a recent article in the Harvard Business Review explains, the danger with imposter syndrome is that it “directs our view toward fixing women at work instead of fixing the places where women work”.

In a worst-case scenario, imposter syndrome can stop people from flourishing and growing in their careers, leading individuals – or whole groups – to quit.

That’s why Oniwinde is now keen to work with big corporations to ensure that other young women of colour are given the support she missed out on. “There was just no awareness of what it was like for me as someone coming in from a totally different background. I knew I was talented enough to be there, but I didn’t know all the customs and little traditions of how to talk about certain things. I wish they’d even sent out a memo to staff to say, “We have new interns, some of them from different backgrounds with varied experiences,” just to make people aware. Having a mentor would also have been amazing.

“Because it’s important to not ignore the elephant in the room – in my case, that there was only one Black intern at my company. It’s just being aware of how that person might feel. Saying ‘I don’t see colour’ is ridiculous. And we need people to realise that and become allies. It could be as simple as saying in a meeting, ‘Hey, I think Kike already made the point that Paul just made.’’’

It’s something I can personally relate to. As a journalist and author, I’ve often been the only young brown woman in a room. That’s not an issue in itself, but the feelings of self-doubt and anxiety come in when I feel left out because of these factors – especially early on in my career when everything was new to me. Like Oniwinde, I found it difficult to not be able to involve myself in certain conversations. I often struggled at networking events because the people I wanted to talk to ended up gravitating toward people who look like them.

So much of this behaviour is unconscious, but if workplaces went out of their way to encourage senior staff to support those from underrepresented groups, it would make a huge difference. Unfortunately, that wasn’t something I ever experienced. Instead, as the years went by, I managed to battle my imposter syndrome by realising that it didn’t exist the way I thought it did. Instead of blaming myself for not being confident enough, I acknowledged the reality: that I was the only person of colour in the room. Of course I felt different and uncomfortable; I was different, and that realisation was freeing simply in itself. The more I accepted it, the easier it was to discuss it with others.

It’s why I now don’t ever refer to those feelings of self-doubt as imposter syndrome; I’d much rather talk about how it feels to be one of very few female authors who are writing novels that break taboos about sex, mental health and culture. I’d rather explain to people that I didn’t feel I could shine in certain roles because there just wasn’t enough encouragement from the company.

“It’s so normal,” says Eusebe. “And realising it is the first step in feeling better about it all. I personally coach women and every year we talk about imposter syndrome and how it’s part and parcel of doing something for the first time. The way I frame it to myself is as ‘new level, new devil’. If you’re feeling it, you’re going somewhere new, learning something new and breaking barriers.

“If there is a hint of unconscious bias, a hint of problematic behaviour that’s leading to the lack of progression – that’s different and you need to say something. Tell your manager you don’t see anyone who looks like you and you’re going to look for a mentor outside your company. That will bring the lack of progression home to them.” When I suffered from what I previously labelled imposter syndrome, I felt anxious. It stopped me from putting myself forward for bigger, better opportunities and it also prevented me from enjoying the success I had right in that moment. But now that I’ve learned how to combat it – mainly by taking the blame away from myself, and just choosing to celebrate myself regardless of what others are saying – I’m so much freer to take risks in my career and enjoy it.

I can see the unconscious biases I’ve suffered in the past clearly now, and it helps me be more compassionate to my younger self who didn’t have the awareness or vocabulary to see what was happening. At the same time, it stops me falling into self-doubt again, and as Eusebe advises, I’ve now sought out mentors who look like me who I can turn to when these feelings come up. They remind me I’m not alone – they have them, too – and by sharing our worries openly with each other, they start to lose their power.

But for Oniwinde, the biggest shift has been internal. Rather than feel huge amounts of pressure to succeed as a young Black woman, she no longer puts any pressure on herself at all. “When my business raised over a million dollars a year ago through crowdfunding, people would say, ‘You must feel so much pressure to succeed now.’ But I don’t. They might in my position, so they put it on me. But I don’t let them. I don’t accept pressure.”

It’s a lesson that’s changed her life, and one she says she couldn’t have learned if she hadn’t gone through the years of self-doubt in banking, as an athlete and even during moments as an entrepreneur. “Experience does matter,” she says. “I’m regularly in rooms where I’m still the only Black woman, and I’m not afraid anymore. I’m in the room because I’m supposed to be here and they’re meant to learn from me.”