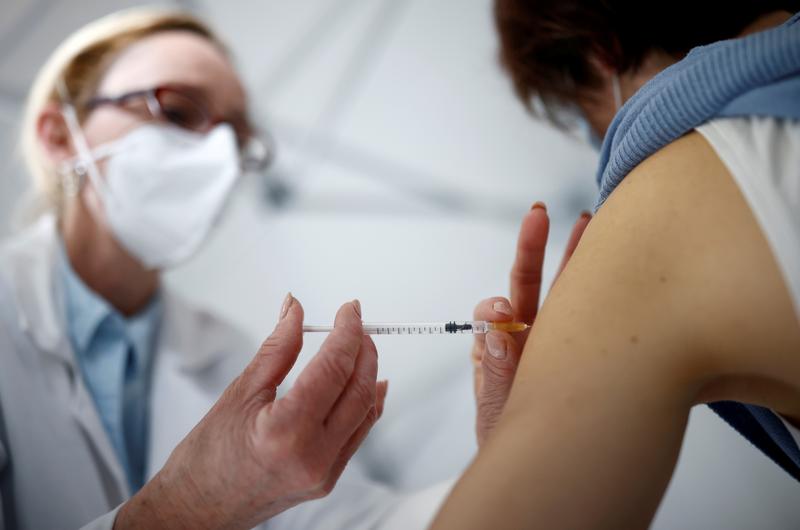 Such symptoms, as reported in clinical trials for the AstraZeneca shot, can include a high temperature or headache and are a normal sign that the body is generating an immune response. They usually fade within a day or so.

The other shots approved in Europe, developed by Pfizer and Moderna, have been linked to similar temporary side-effects, including fever and fatigue.

But with the AstraZeneca shot the latest to be rolled out, health authorities in France have issued guidance to stagger giving the shot, two regions in Sweden paused vaccinations, and in Germany some essential workers are refusing it.

A spokesman for AstraZeneca said: “Currently, the reactions reported are as we would expect based on the evidence gathered from our clinical trial programme.”

People receiving the vaccine are closely monitored through routine pharmacovigilance activities, the Anglo-Swedish drug maker said, adding that it was continuing to keep a close eye on the situation.

“There have been no confirmed serious adverse events,” the spokesman said.

In France, which started administering the AstraZeneca shot on Feb. 6, staff at a hospital in Normandy experienced stronger side-effects than seen with the alternative vaccine from Pfizer and German partner BioNTech.

“Between 10% and 15% of those vaccinated may have side-effects from this vaccination, but it is only a feverish state, fevers, nausea and within 12 hours it goes away.”

Following similar reports from other hospitals, the French medicines safety agency said on Feb. 11 that such side-effects were “known and described” but should be subject to surveillance with regard to their intensity.

It also issued guidance to stagger vaccinations of front-line staff working together in teams to minimise the risk of disruption to operations.

The agency put out the advice after receiving 149 alerts of often strong flu-like side-effects from the AstraZeneca vaccine. During this period a total of 10,000 people received the shot nationwide.

Some U.S. hospitals and other organisations with front-line staff adopted a similar strategy when the country’s vaccination programme started in December. The United States is administering shots from Pfizer/BioNTech and Moderna.

In Britain, home to the AstraZeneca vaccine developed at Oxford University, the policy has been to make vaccinations readily available to hospital staff. As many work shifts, that naturally spaces out the process.

The issues in France highlight how some doctors and hospitals are still learning how best to administer vaccines as governments race to tame the pandemic and get shots in arms as quickly as possible.

It’s also the latest setback for the French vaccination campaign which has been criticised for a slow start. Last week, the government said just over 3% of the population had received their first dose.

In Sweden, two of 21 healthcare regions paused vaccinations of workers last week after a quarter called in sick after getting the AstraZeneca shot.

The Sormland and Gavleborg regions said that around 100 out of 400 people vaccinated had reported fever or fever-like symptoms. Most cases were mild and in line with previously reported side-effects.

Both regions said they would resume vaccinations, and the Swedish Medical Products Agency saw no reason to change its vaccination guidelines.

AstraZeneca’s vector-based vaccine is the third to win regulatory approval in the European Union.

As part of the European Medicines Agency’s positive recommendation on Jan. 29, the watchdog concluded it was about 60% effective, compared to more than 90% for the vaccines from Pfizer/BioNTech and Moderna.

It also deemed the product safe to use and it will monitor reports of side-effects as a matter of routine.

In Germany, Health Minister Jens Spahn responded on Wednesday to reports that essential workers were reluctant to receive the AstraZeneca shot after some experienced strong side-effects, saying it was both safe and effective.

“I would be vaccinated with it immediately,” Spahn told reporters.

Like most European countries, German states typically do not offer people a choice of which vaccine they will get, leading in some cases to people not turning up to appointments to get the AstraZeneca vaccine.

Germany has taken delivery of 737,000 doses from AstraZeneca but only administered 107,000, according to figures from the health ministry and the Robert Koch Institute that leads its pandemic response.

“This vaccine is an excellent way to prevent serious COVID disease,” said the health ministry in the eastern state of Saxony. “Still, we note that there are still vacant vaccination dates for AstraZeneca.

“From our point of view, it is wrong that this vaccine is available but not being used,” it said, adding that it was reallocating spare shots to teachers and public health workers.