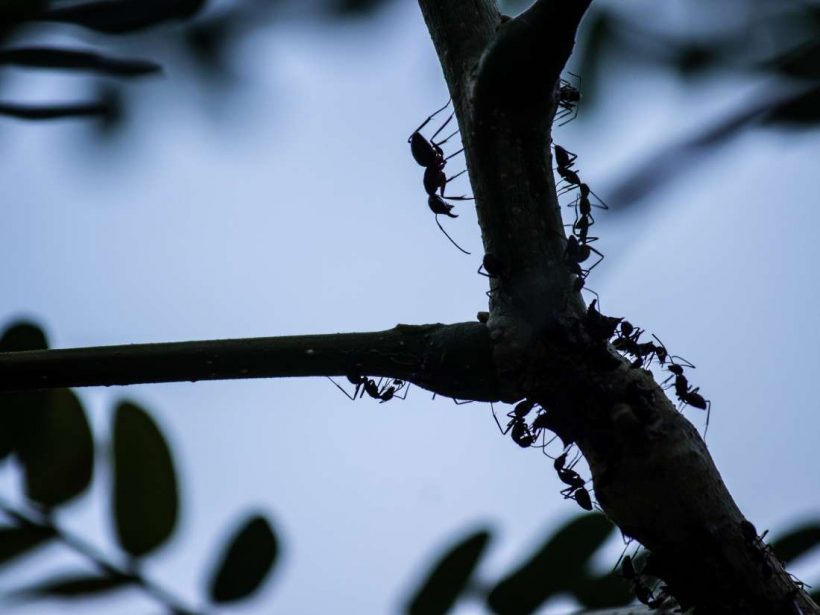 Scientists at the University of Wisconsin-Madison have carried out the largest and most thorough investigation ever into the antibiotic activity of microbes that live on insects.

A highlight of the new study is the discovery of a new antibiotic in the Cyphomyrmex ant, which is a Brazilian species that farms fungi. The researchers named the compound cyphomycin.

Laboratory tests demonstrated that cyphomycin could fight fungi that have defeated most other antibiotics. The compound also treated a fungal infection in mice without giving rise to toxic side effects.

In a recent Nature Communications paper on these findings, the team explains that a lack of new antibiotics is contributing to the growing global threat of antibiotic-resistant infections.

“Through our systematic assessment,” note the authors, “we show insect microbiomes present a promising source of novel natural products.”

The rising threat of antibiotic resistance

Antibiotic resistance arises when infectious bacteria, fungi, and other pathogens no longer succumb to drugs that used to kill them. Instead, they continue to grow.

Infections due to antibiotic-resistant pathogens usually require longer hospital stays and a greater number of follow-up visits from doctors. In addition, treatments tend to have higher costs and more toxic side effects.

In 2018, the World Health Organization (WHO) released surveillance data that confirmed the seriousness of the global threat that antibiotic resistance poses.

The data reveal that, around the world, some of the most common infections are becoming drug resistant.

In the United States, the Centers for Disease Control and Prevention (CDC) estimate that antibiotic-resistant bacteria infect at least 2 million people and cause 23,000 deaths each year.

A key concern regarding the global antibiotic resistance crisis is that the types and number of new drugs in the pipeline will not be sufficient to overcome the threat.

The WHO repeated their warning about this in a 2017 report. The global agency stated that most of the 51 antibiotics in clinical development were “modifications of existing classes of antibiotics” and would only offer short-term solutions.

Just as many bacteria in insects as in soil

Most types of antibiotics in use today come from Streptomyces bacteria, a large genus that began evolving some 400 million years ago.

Over that period, Streptomyces species have evolved and adapted to different habitats, such as soil and insects. The chemistry in the compounds that the bacteria produce reflect their divergent lineages.

Genetic studies have shown that just one strain of Streptomyces could potentially produce tens of compounds similar to those already in use as antibiotics. In addition, the bacteria contain huge numbers of “relevant biosynthetic gene sets.”

For these reasons, scientists are intensively studying Streptomyces bacteria with the expectation that they will discover new drugs to combat antibiotic resistance.

However, the authors of the new study point out that searches for novel antibiotics in soil-based Streptomyces “largely rediscover known compounds.” They also note that no studies have systematically searched microbiomes. So, they chose to focus on Streptomyces in insects.

They collected more than 2,500 species of insect, ranging from ants, bees, and flies to beetles, moths, butterflies, and more. Around a third came from regions with a temperate climate, another third came from the tropics, and the rest came from colder areas, such as the Arctic.

The researchers note that, contrary to the “prevailing assumption” that Streptomyces species are most abundant in soil, their findings suggest that the bacteria are just as plentiful in insects.

Bacteria from insects are more powerful

The insects yielded more than 10,000 strains of bacteria to test. The researchers also examined 7,000 strains that came from soil and plants.

The team tested how well each strain of Streptomyces was able to stop the growth of 24 different kinds of germ, including some that can cause serious harm, such as the methicillin-resistant superbug Staphylococcus aureus (MRSA).

The team also tested some of the more promising strains in mice. These strains were very effective in killing bacterial and fungal infections, and only a few had toxic side effects.

In another part of the study, the researchers focused on cyphomycin, an antifungal compound that they had found in Streptomyces bacteria on the Brazilian Cyphomyrmex fungus-growing ant.

After analyzing the chemical structure of cyphomycin, they purified it and showed that it could treat Candida albicans in mice. C. albicans is a fungus that commonly infects people with a weakened immune system. The compound also appeared to have few toxic side effects in the mice.

Let insects ‘do the prospecting’

The team was not surprised to find that insects could be a rich source of new antibiotics. Insect survival depends on coevolving with microbes that help fight pathogens that are also evolving.

The researchers also point out that because the bacteria have coevolved with insects, they could offer two advantages. First, they are less likely to be toxic, and second, they could be effective against drug-resistant pathogens.

“The insects are doing the prospecting for us,” says Cameron R. Currie, a professor of bacteriology and senior author of the study.

He and his colleagues conclude:

“The promise of insect-associated Streptomyces as a new source of antimicrobials has the potential to reinvigorate the stagnated antibacterial and antifungal discovery pipelines.”