The new reference value for Vitamin B12 intake: Not just for Vegans essential

The German nutrition society (DGE), in collaboration with the nutrition societies of Austria and Switzerland, revised the reference value for Vitamin B12 intake. The derived estimated value for adequate intake for adults is 4.0 micrograms per day, higher than the previously recommended intake of 3.0 µg per day.

Known Vitamin B12 is mainly as a critical nutrient for Vegans. In sufficient quantities it is found only in animal foods. Therefore, Vegans need to take permanently a Vitamin B12 Supplement to avoid deficits. But even vegetarians sometimes too little Vitamin B12. In particular, in the case of increased nutrient time requirement, e.g. in pregnancy and lactation, should vegetarians pay attention to a sufficient intake of Vitamin B12 and, if necessary, also Vitamin-B12-take supplements. Regardless of the supply of gastric-intestine can lead to disorders such as persistent Gastritis, Crohn’s disease, and some drugs to Vitamin B12 deficiency. Also the removal of Parts of the stomach or intestine can make it difficult for the recording. Especially the elderly are at increased risk for inadequate intake of the Vitamin from the food. 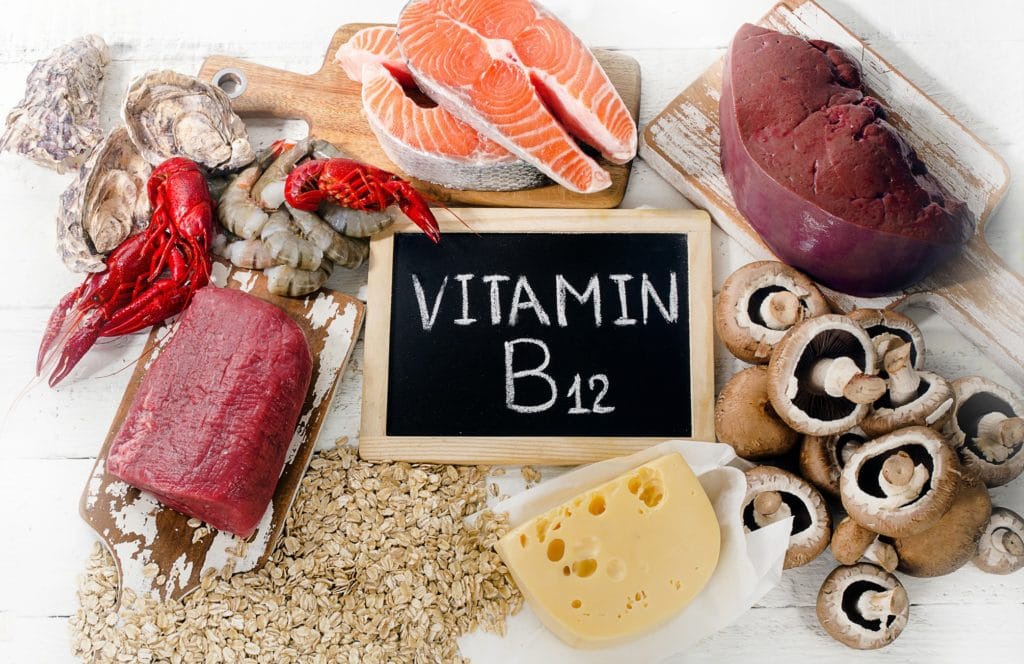 Vitamin B12 is involved in vital and, among others, the process of cell division, blood formation, DNA synthesis, and the breakdown of fatty acids and amino acids such as homocysteine. In the case of a deficiency of Vitamin B12 can lead to anemia, neurological disorders and mental abnormalities, such as fatigue and depressive moods.

For a sufficient Vitamin B12 supply, the DGE recommends to consume regular milk and milk products, eggs, fish, seafood, poultry and lean meat. A needs Vitamin B12 intake, only plant foods is not possible. The estimated value can be, for example, with a small glass of milk, a Cup of yogurt, an Egg and 60 g of Camembert.

What is Vitamin B12?

Vitamin B12 is the collective term for various Compounds having the same biological activity and the same basic chemical structure with a Kobaltion in the centre. The Compounds are therefore also referred to as cobalamins. Cobalamins are exclusively formed by micro-organisms and occur in adequate quantity and for the people available almost only in animal foods. In addition to the vitamin-active Compounds, there are also so-called Vitamin-B12-analogues. They are not included, for example, in some plant foods such as seaweed, or Sauerkraut, but contribute to a sufficient supply with Vitamin B12. Due to the Blockade of the transport systems, they may reduce the supply even further.

Estimated values instead of the recommended intake

Since the Vitamin B12-necessary, not with desirable accuracy can be determined, the DGE, the revised reference values for Vitamin B12 intake is not more than the recommended intake, but rather as estimated values for adequate intake of. The estimated value for adults was derived on the Basis of studies in which an adequate Vitamin B12 intake based on various biomarkers was determined. The concentrations of the status parameters (total Vitamin B12 and Holo-transcobalamin) in Serum, as well as function parameters (methylmalonic acid and homocysteine).

The estimated values for adequate intake of Vitamin B12 are age-dependent: In the course of the Childhood rise of 0.5 µg/day for infants aged 0 to under 4 months to 4.0 ág/day for adolescents and adults. Pregnant and Nursing women have an increased need; the estimated value for adequate Vitamin B12 intake for Pregnant women is 4.5 µg/day and for Lactating 5.5 µg/day.