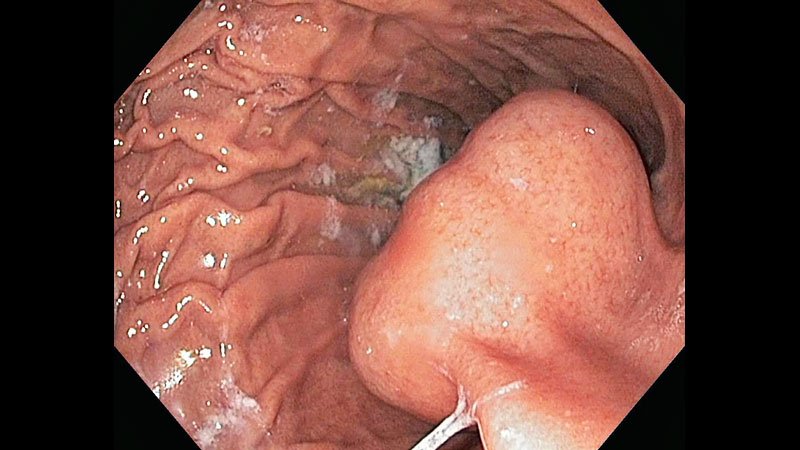 A new technique in which near-infrared hyperspectral imaging (NIR-HSI) is combined with machine learning could be useful for detecting cancers deep within tissue, suggests a research team from Japan.

An example of such a cancer is gastrointestinal stromal tumor (GIST). These tumors are often located in the submucosal layer and are covered by mucosal tissue, making diagnosis by conventional endoscopy difficult.

In a study to assess the new technique, the researchers examined 12 GIST lesions that were surgically resected. Seven of these lesions were totally covered by a mucosal layer (thickness, 0.4 – 2.5 mm); three lesions were partially covered.

Using NIR-HSI with machine learning, the researchers found that GIST lesions appeared green and that normal tissue appeared yellow. Calculation of classified pixels showed that the technique detected the GISTs with a specificity of 73%, a sensitivity of 91.3%, and an accuracy of 86.1%.

The findings were published in Nature’s Scientific Reports.

“There are many situations where we need to be able to detect cancers deep in the tissue that are not visible during surgery or diagnosis,” said lead author Toshihiro Takamatsu, PhD, assistant professor, Tokyo University of Science, Chiba, Japan. “Near-infrared hyperspectral imaging has a strong potential to detect deep lesions,” he said.

In this study, the imaging was performed ex vivo.

“The data presented in the paper were not obtained endoscopically but utilized surgical specimens to demonstrate proof of concept. Additional data would be required to demonstrate its feasibility with endoscopy,” noted Margaret von Mehren, MD, chief, Division of Sarcoma Medical Oncology, Fox Chase Cancer Center, Philadelphia, Pennsylvania, who was approached for comment.

Takamatsu said his team is currently developing prototypes of laparoscopes and endoscopes for NIR-HSI.

“This technology is being developed to be added onto endoscopy, and as such I think may well be feasible,” von Mehren commented.

Currently Diagnosed by Endoscopy and Biopsy

GISTs are found predominantly in the stomach (60%) and the small intestine (30%). Although some are detected after the occurrence of symptoms such as pain, gastrointestinal bleeding, and bowel obstruction, most cases are asymptomatic.

The authors note that endoscopic examination is the primary tool for detecting GISTs. Lesion usually first appear as submucosal tumors. Direct observation cannot differentially diagnose these tumors, and biopsies may have a low diagnostic yield, because the lesions are often deep and not easily accessible.

Endoscopic ultrasound-guided fine-needle aspiration can be used for taking samples for biopsy, but it can be technically demanding, and making a definitive diagnosis of GIST requires time-consuming immunohistochemical procedures, the authors write. A high-throughput, simple diagnostic technique for identifying GISTs located under the mucosa is needed. They report on the potential of NIR-HSI for diagnosing submucosal tumors that present deep within organs.

For the study, the team worked on gastric GIST lesions that had been surgically resected from 12 patients. The median size of the tumors was 41 mm (range, 24 – 80 mm).

The researchers imaged each specimen with an NIR hyperspectral camera from the aspect of the mucosal surface.

The site of the GIST was defined by a pathologist who used the NIR image to prepare training data for normal regions and regions with GISTs. A machine learning algorithm–support vector machine was then used to predict normal and GIST regions.

The results were displayed using color-coded regions. The team says that the results from this small study show that the technique has “great potential” in the diagnosis of GISTs as well as other tumors that are located deep within tissue.

“I think the potential benefit of such a diagnostic tool is with small lesions when trying to differentiate benign findings, such as leiomyomas,” von Mehren commented.

She pointed out that this study comes from Japan, where endoscopy is routinely used for surveillance of gastric cancer. Thus, many cases of GIST may be diagnosed before symptoms occur and when lesions are small. Such a practice is less common in other parts of the world, she told Medscape Medical News.

Overall, she sees this technique as having the most utility in cases involving small lesions, inasmuch as larger lesions are easily assessed through biopsy with endoscopic ultrasound, and pathologic assessment is not a lengthy procedure. “In addition, as we now appreciate that GISTs with different molecular drivers require different therapeutic approaches, I continue to see a role for tissue biopsies in the diagnostic workup of GISTs,” she said.

The study was partially funded by the National Cancer Center Research and Development Fund. The authors and von Mehren have disclosed has no relevant financial relationships.