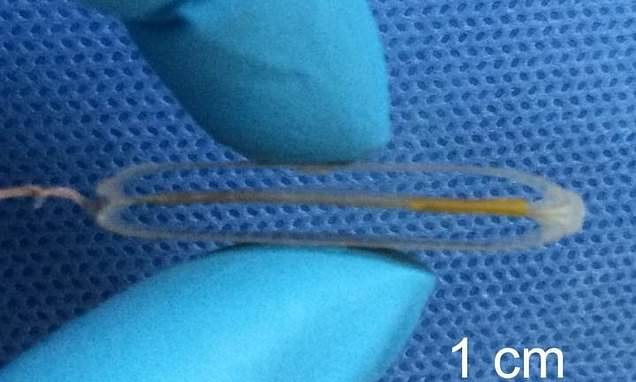 A new device powered by the heart could finally solve the pacemaker problem.

Some 1.5 million Americans have pacemakers implanted to keep their hearts beating steadily.

The devices are life-saving, but they don’t last forever. Currently, most pacemaker batteries have to be replaced every five to 12 years, and doing so means invasive surgery each time.

Researchers at the National Key Laboratory for Science and Technology in Shanghai, China have developed a tiny device that piggybacks off the heart itself to generate energy – meaning a pacemaker battery would never have to be replaced. 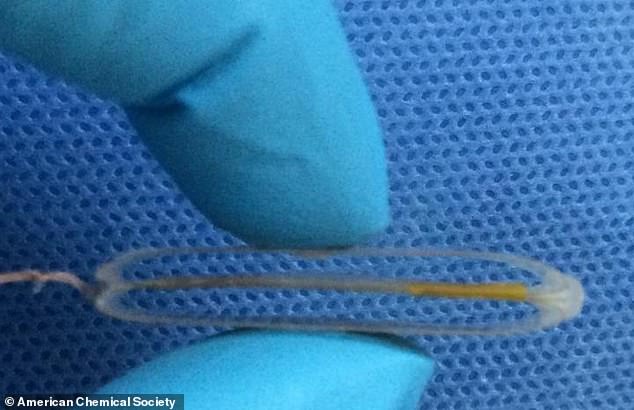 Chinese scientists have created a pacemaker that doesn’t need a battery because it generates energy when the beating of the heart bends it, meaning it could end pacemaker replacements

A healthy heart can keep time for itself, by way of an internal pacemaker called the sinus node in the upper right chamber.

It fires off an electrical charge some 60 to 100 times a minute, and that electrical energy sets off a series of contractions of heart muscle which in turn pumps blood throughout the body.

But as the heart ages or once it becomes diseased, the sinus node takes a hit, too, and may fail to keep the heart beating in time or at all.

Fortunately, since the late 1950s, we’ve been able to substitute a small, implantable, battery-powered device to send these electrical signals once the heart can’t any more.

Even 60 years later, however, we haven’t figured out what to do about the device’s power supply, however.

Surgery to place the pacemaker and wires that feed its electrical pulses to the heart is complex, requiring doctors to open the chest cavity.

The pacemaker itself is tucked away in a ‘pocket’ much closer to the skin surface.

Once the battery runs out, usually only a local anesthetic is required to remove the old device and put a new, fully charged one.

Still, the procedure is an unpleasant hassle that comes with a risk of infection, and it’s expensive to have done.

Depending on the pacemaker, the device itself may cost anywhere from $19,000 to $96,000, according to Costhelper – and that doesn’t include the expenses for the operation.

But the new Chinese-developed device shows promise to end the procedure.

The new pacemaker accessory can actually harness the heart’s beats to power a pacemaker.

The key to innovation is its flexible plastic frame, which allows the device to capture more energy from the heart than previous hard cases have done.

At the device’s center are layers of piezoelectric material, which generates power whenever it is bent.

Many materials acquire an electrical charge when force is applied to them, including natural ones in our bodies.

Crystals, DNA and even bone are capable of capturing electrical energy.

The trick is to apply enough force to a piezoelectric material, then supercharge it, because, on their own, these materials don’t work up all that much energy.

Scientists have long been looking to piezoelectricity as an elegant solution to recapturing otherwise wasted energy, and some have even applied it to the pacemaker before.

But, previously, other researchers have not been able to create a device that bends enough to generate sufficient power.

Now, the Chinese scientists have shown their device can fuel a pacemaker and keep a pig’s heart beating.

The devices frame allows it to flex significantly with as little movement as is created by a heartbeat.

While the pacemaker itself is implanted in its usual place, near the collar bone and just under the skin, the new power device is tucked underneath the heart, where the organ’s contractions bend it rhythmically.

In tests in pigs, the new pacemaker generated just as much power as a pacemaker, using a completely renewable energy source.