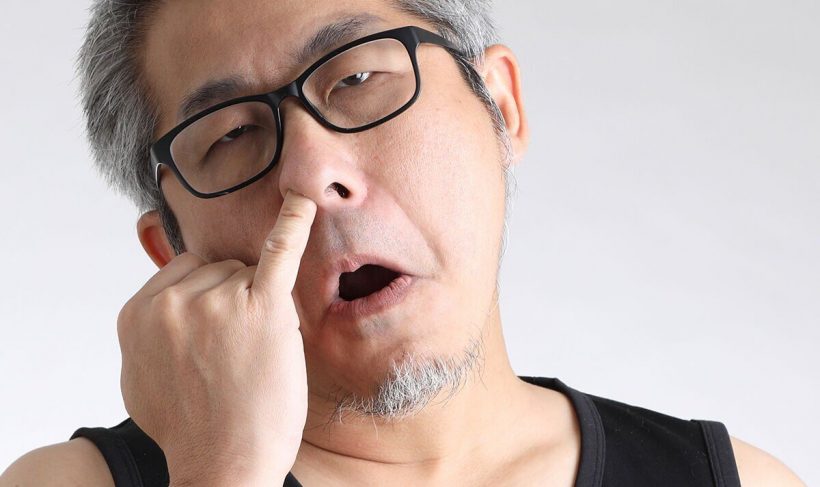 Picking your nose is considered a bad habit by many, but it could also have a detrimental impact on your health, according to Griffith University scientists. The study found chlamydia pneumoniae, a type of bacteria that can cause respiratory tract infections, exploited the nerve extending between the nasal cavity and the brain as an invasion path to assault the central nervous system.

In response, cells in the brain began depositing amyloid beta protein which is a sign of Alzheimer’s disease.

The study findings were published in the journal Scientific Reports.

Professor James St John, Head of the Clem Jones Centre for Neurobiology and Stem Cell Research, said: “We’re the first to show that Chlamydia pneumoniae can go directly up the nose and into the brain where it can set off pathologies that look like Alzheimer’s disease.

“We saw this happen in a mouse model, and the evidence is potentially scary for humans as well.”

The next step is for the research to be carried out in humans. The professor continued: “We need to do this study in humans and confirm whether the same pathway operates in the same way. It’s research that has been proposed by many people, but not yet completed.

“What we do know is that these same bacteria are present in humans, but we haven’t worked out how they get there.”

There are some simple ways to look after the lining of your nose and potentially lower the risk of developing late-onset Alzheimer’s disease that Professor St John suggests.

“Picking your nose and plucking the hairs from your nose are not a good idea,” he said.

“We don’t want to damage the inside of our nose and picking and plucking can do that.

“If you damage the lining of the nose, you can increase how many bacteria can go up into your brain.”

Smell tests may also help detect Alzheimer’s, according to Professor St John, as loss of sense of smell is often deemed an early indicator.

He suggests smell tests from when a person turns 60 years old could be beneficial as an early detector.

He said: “Once you get over 65 years old, your risk factor goes right up, but we’re looking at other causes as well, because it’s not just age – it is environmental exposure as well. And we think that bacteria and viruses are critical.”

There’s no certain way to prevent all types of dementia, but there’s good evidence a healthy lifestyle can help reduce your risk of developing dementia when you’re older.

It may also help being aware of the risk factors. The NHS lists these as:

Other risk factors may also be important:

And the following may help reduce your risk: