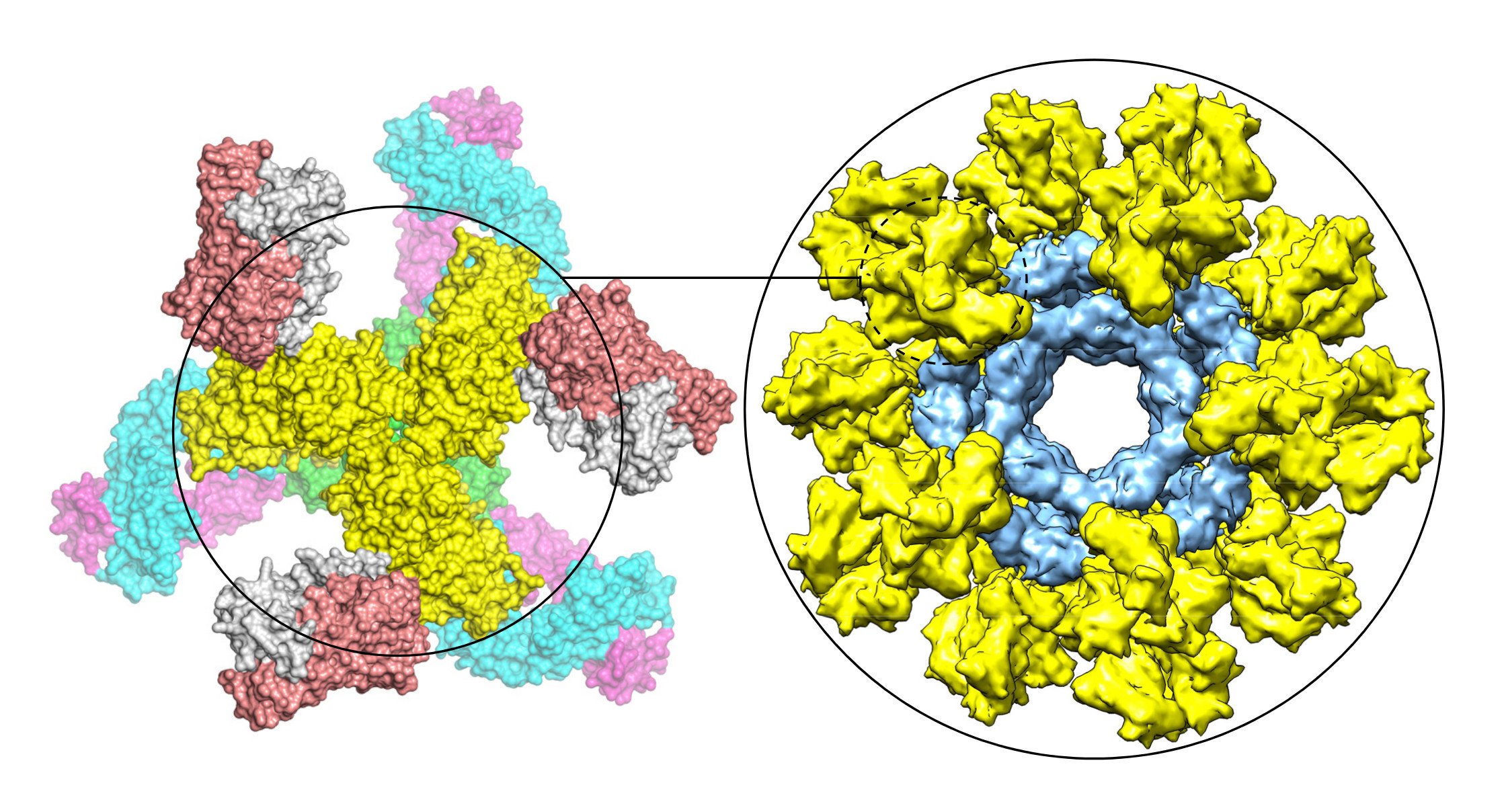 The new vaccine strategy, described in a paper on November 23 in Science Advances, is based on the HIV envelope protein, Env. This complex, shape-shifting molecule has been notoriously difficult to produce in vaccines in a way that induces useful immunity to HIV.

However, the Scripps Research scientists found a simple, elegant method for stabilizing Env proteins in the desired shape even for diverse strains of HIV. Mounted on virus-like particles to mimic a whole virus, the stabilized Env proteins elicited robust anti-HIV antibody responses in mice and rabbits. Candidate vaccines based on this strategy are now being tested in monkeys.

“We see this new approach as a general solution to the long-standing problems of HIV vaccine design,” says principal investigator Jiang Zhu, associate professor in the Department of Integrative Structural and Computation Biology at Scripps Research.

Copies of Env study the surface of HIV; their chief function is to grab hold of host cells and break into them to initiate infection. Since Env plays this crucial role in infection, and is the viral structure with the most exposure to the immune system of an infected host, it has been the main target of HIV vaccine efforts. The idea has been to inoculate people with the whole Env protein or subunits of it to stimulate the production of Env-binding antibodies, in the hope that these antibodies will prevent HIV from infecting host cells in future exposures to the virus.

So far, of course, no HIV vaccine has been effective in large-scale clinical trials. Many researchers believe that an HIV vaccine can work if it presents Env proteins to the immune system in a way that closely resembles the shape of Env on a real virus before it has infected a cell. But presenting Env correctly has been a huge challenge.

On an HIV virus, Env protrudes from the viral membrane in tight clusters of three, called trimers, and these complex structures adopt radically different shapes before and after infecting cells. HIV vaccine researchers, despite years and tens of millions of dollars of experimentation, have failed to find a broadly applicable method for stabilizing Env trimers in the desired, pre-infection shape.

“The trimer-stabilization solutions that have been reported so far have worked for a few HIV strains but have not been generalizable,” Zhu says. “Env trimer ‘metastability’, as we call it, has really been a central problem for trimer-based HIV vaccine design.”

Zhu, trained as a biophysicist, sought a more general solution to the Env stability problem, and in a paper in 2016 he and his Scripps Research colleagues reported that modifying a short, springy section of Env called HR1 might do the trick—it allowed Env to stay in the pre-infection, “closed” shape.

In the new study he and his team showed that this strategy does indeed work for Env trimers from diverse HIV strains circulating in different parts of the world. This “uncleaved prefusion-optimized” (UFO) approach, as they call it, yields Env trimers that are stabilized in the closed shape and can be produced efficiently, with surprisingly little need for purification, in the types of cells normally used in biotech manufacturing.

“By now in my lab we’ve made this modification to Envs from 30 to 40 different HIV strains, and in most of the cases it has worked like a charm,” Zhu says.

He and his colleagues further optimized their vaccine strategy by genetically linking their stabilized Env trimers, up to 60 at a time, to individual nanoparticles that mimic the globular shape of a whole virus. In this way the vaccine molecule, though artificial and lacking the genetic material for viral replication, seems to the immune system very much like a real invading virus and stimulates a stronger reaction.

In mice, Zhu and his team found, a sample Env-on-nanoparticles vaccine, within just eight weeks, elicited antibodies that in lab tests successfully neutralized a naturally circulating HIV strain—of a type that prior candidate vaccines generally have failed against.

“This is the first time any candidate HIV vaccine has induced this desired type of antibody response in mice,” Zhu says.Similarly unprecedented results were obtained in rabbits, demonstrating that the nanoparticle-based approach is clearly superior to the use of isolated Env proteins—it elicits a significantly stronger response and does so much more quickly.