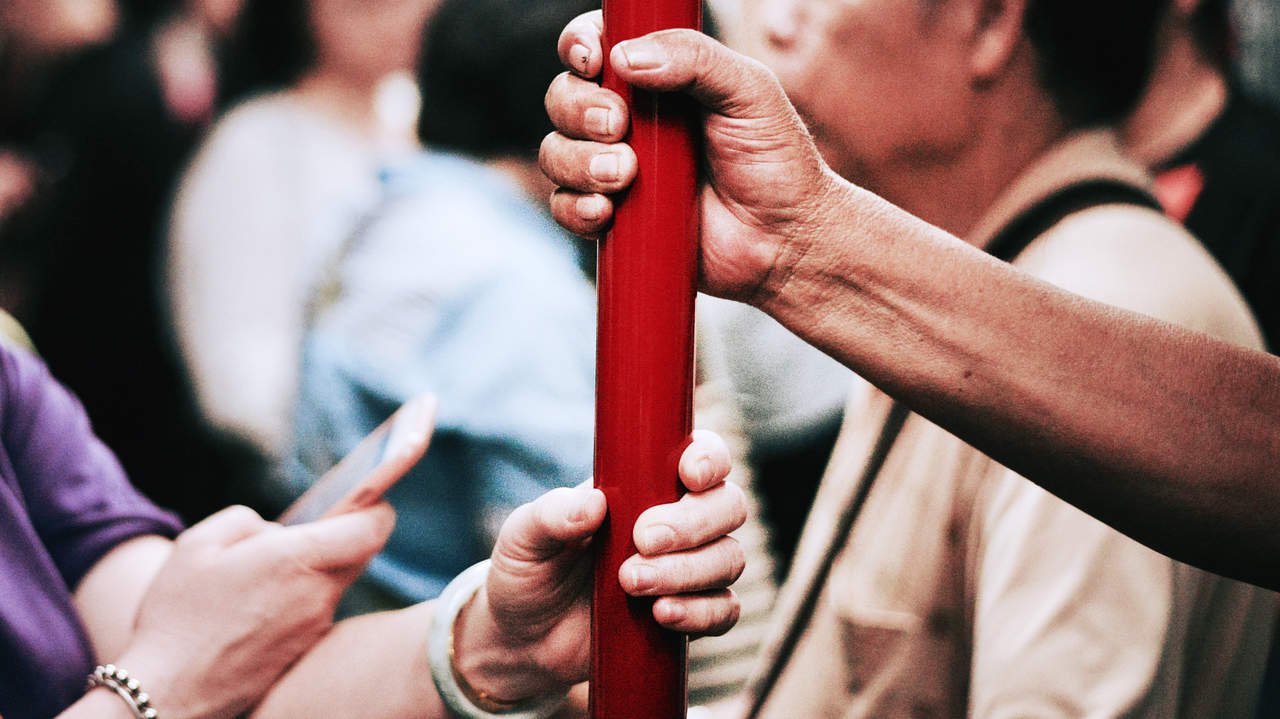 Even if you’re not usually a germaphobe, cold and flu season can have the strongest-willed of us feeling squeamish about touching things like bus and subway poles, doorknobs, and even shaking a stranger’s hand. As many moms like to remind their kids: You don’t know where that hand has been. And during the colder months, when it seems that everyone is sniffling and sneezing, a hands-off policy may seem smart.

But how likely is it really that you’d get sick from touching an infected handrail or countertop?

Pretty likely, Alison Carey, MD, an associate professor of microbiology and immunology at Drexel University, tells Health. “Flu viruses can survive on hard surfaces (like bus poles) and infect another person for 24 to 48 hours,” she says. “Cold viruses don’t survive as long—usually a few hours. But there is evidence that they can survive and be passed on for up to 24 hours.”

So yes, it’s entirely possible that someone who has a cold or the flu can sneeze into their hand, then touch a doorknob or bus pole, and anyone who opens the same door or grabs the same pole for the next few hours (and up to a whole day) can catch their illness. The longer the virus sits, the more the possibility of someone catching the cold or flu decreases, Dr. Carey says. “But people can definitely get it from touching bus poles, especially in the five to 10 minutes that elapse from a sick person getting off the bus and someone else getting on,” she says.

Any surface can harbor a cold or flu virus long enough for someone to touch it and get sick, Dr. Carey says, but there are certain germy hotspots like bus and subway poles and doorknobs. Basically, it’s worth being wary of any surface that gets touched again and again during the day, such as: handrails, doors, light switches, faucets, and public transportation poles. “If you’re going through a subway turnstile, that gets touched and touched and touched,” Dr. Carey says.

So how can you protect yourself, short of wearing latex gloves everywhere you go? It comes down to good hand hygiene and proper sneezing etiquette, Dr. Carey says. “Just wash your hands! And keep them away from your face as much as possible.”

People touch their faces all the time without realizing it, she adds, and that’s an easy way to take a cold virus from the doorknob right into your body. “It’s not that difficult to pass along the viruses,” Dr. Carey says. “That’s why everyone gets sick this time of year.” If you’ve touched an infected surface and then bring your hand up to cover a yawn or rub your eye or scratch your nose, then you’re introducing that virus to a vulnerable spot on your body, and it’s sure as heck going to take advantage.

Keep those hands clean (alcohol-based hand sanitizer can do the trick when a sink isn’t available) and away from your face—and sneeze into a tissue or into the crook of your elbow if you’re already sick. Other than getting the flu shot, it’s one of the best ways to keep the virus from spreading.