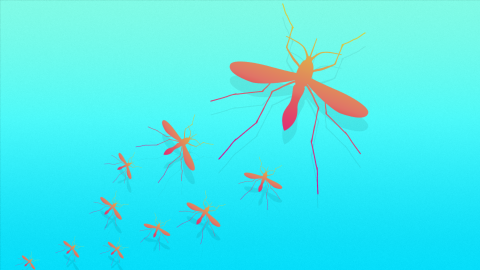 Do you feel like a mosquito magnet? Do you end up wearing jeans on even the most sweltering summer days as armor from bug bites? If you’re tired of seeming like bug bait, you’re not alone. It turns out that some people really are more prone to mosquito bites than others.

“How is it that you become a target? Mosquitoes use all their senses to find a blood source, including ‘smell’ (they use sensory receptors) to detect levels of carbon dioxide,” Robb Akridge, PhD, CEO and Founder of REA Innovations explains to SheKnows. “The higher the CO2 concentration, the closer a victim.” They also use sight—they seek out dark bodies since it might mean a mammal is close by. And they also use temperature sensors to go toward hotter objects. Warmth could mean a warm-blooded animal is close at hand. So if you’re wearing dark clothing and you have been exercising a lot, are hot, and have labored or fast breathing, then mosquitoes will have an easier time finding you.

As far as being extra popular with mosquitos, about 20% of the population is more attractive to mosquitoes than others. “In that subgroup they may produce more CO2 than others,” Akridge says. “If you have labored breathing (sometime seen in out of shape or unhealthy individuals), or if you are just a large person, you are producing more CO2. This mosquito-preferred group may also heat up faster, which would draw them in. However, there are many other reasons — known and unknown — why this group is a better target for a mosquito swarm.” Akridge shares a list of some possible reasons why mosquitos are drawn in:

So why do mosquitoes bite in the first place? “The female mosquito needs the blood of a mammal (humans are not first on the list; cattle and horses are easier targets) to provide proteins for her to produce eggs,” Akridge says. “The female is the only one that can extract blood. When not producing eggs, male and female mosquitoes feed on nectar.”

To make yourself less of a mosquito target naturally, Akridge shares some things you can do:

There are also a few foods that are thought to repel mosquitoes, including garlic, onions, vinegar, tomatoes (a diet high in thiamine is thought to repel them, but there is no proof), beans (also high in thiamine), and even grapefruit. “However, there is no scientific proof that consuming these at any amount will stop will you from being attacked by mosquitoes,” Akridge says. “And in our world of Zika and West Nile virus here in the USA, you must never depend on diet to protect you from being bitten. The only thing known to prevent mosquitoes from biting is DEET. Although to some this is a harsh repellant, it works.” Let’s say that again, louder for the folks in the back: a bug repellent that contains DEET is the only thing known to prevent mosquitos from biting.

As far as foods you should avoid in order to prevent mosquito bites, the only one with any support is beer. “Unfortunately, it is not known what causes beer to be a mosquito attractant,” Akridge says. “Another one is salt or salty foods. Lactic acid in your sweat can attract them, and apparently salty foods can increase lactic acid. So that means no beer, or a salted rim on your margaritas, and skip the chips.”