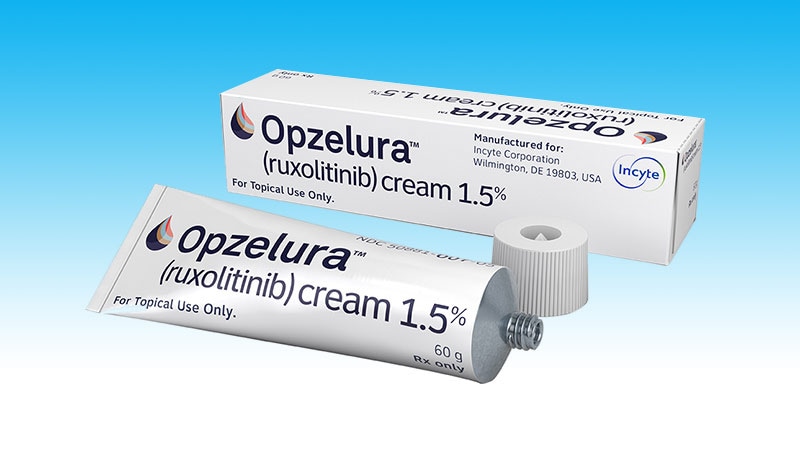 “Ruxolitinib cream monotherapy over 8 weeks was associated with rapid and considerable itch relief in Black or African American patients with AD and was well tolerated,” the study authors wrote in a poster presented at the Society for Investigative Dermatology (SID) 2022 Annual Meeting.

AD can behave differently in different racial groups and can be especially bothersome in Black patients. AD has a prevalence of about 20% in Black children and 5%-10% in Black adults. Black children are roughly twice as likely to be diagnosed with AD, and to have severe AD, than White children, according to the authors.

Lead author Lawrence F. Eichenfield, MD, professor of dermatology and pediatrics at the University of California, San Diego, and colleagues used pooled data from two identically designed phase 3 studies to describe the effects of the cream formulation of the Janus kinase (JAK) 1 and JAK 2 inhibitor ruxolitinib on itch in Black patients.

Topical ruxolitinib (Opzelura), 1.5%, was approved last September for treating AD in non-immunocompromised patients with mild to moderate AD, ages 12 years and older. Last month, it was approved for the treatment of nonsegmental vitiligo in the same age group.

FDA approval for AD was based on the results of the TRuE-AD1 and TRuE-AD2 double-blind randomized trials, which enrolled about 1200 patients over aged 12 with AD. These patients included 292 Black teenagers and adults between aged 12-71 years who had AD for 2 years or longer, with an Investigator’s Global Assessment (IGA) score of 2 or 3, with 3%-20% affected body surface area, excluding the scalp.

Of the 292 patients, those in the two treatment groups (n = 231) applied ruxolitinib cream twice a day for 8 weeks (0.75% in 118 patients and 1.5% in 113 patients) and 61 applied the vehicle. They used electronic diaries to record the worst level of itch they had experienced each day, from 0 (no itch) to 10 (worst imaginable itch). The main results were as follows:

Ruxolitinib May Be an Alternative to Systemic Immunosuppressives

Providers often assume that patients of different races respond similarly to treatment, but that is not always true, she told Medscape Medical News in an email.

“This study proves ruxolitinib’s effectiveness in Black patients, who often have more severe atopic dermatitis signs and symptoms,” said McMichael, who was not involved in the study. “The fact that atopic dermatitis in patients of color has been singled out to examine efficacy is a great way to show that the findings are not just in those who have thinner plaques and potentially less longstanding thickening of the skin from scratching (lichenification),” she added.

McMichael welcomed the lack of systemic side effects and quick relief of itch with this treatment, noting that the effect on itch “is rare with other treatments and extremely rare with other topical medications.”

The effect of topical ruxolitinib on pruritus “was interesting and surprising because very few available topical medications can control itch,” she explained. “The strongest topical steroids can help with pruritus, but they have the risk for skin thinning (atrophy),” while topical ruxolitinib is not associated with skin atrophy.

“After topical steroids fail as first-line treatment, it is likely that more patients will be given this topical medication rather than be moved to immunosuppressive systemic medications,” she noted.