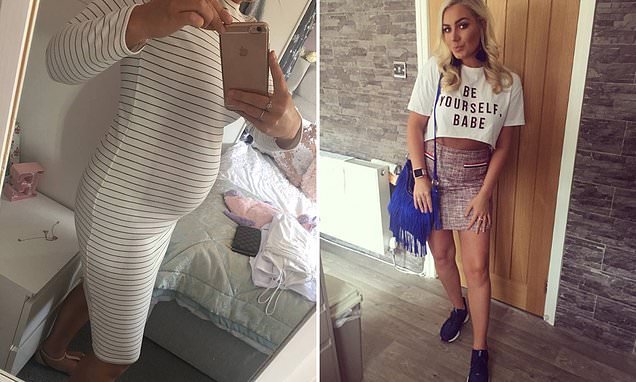 Woman, 24, whose IBS left her looking ‘nine months pregnant’ is now a slim size 10 after cutting out eggs, milk, yeast and BEEF

A social worker’s IBS caused her to suffer such extreme bloating that she looked ‘nine months pregnant’.

Emily Catterall, 24, from Preston, Lancashire, went from a slim size eight to a 14 in just a few months after she developed a severely swollen abdomen out of the blue.

After being unable to shift the pounds, Miss Catterall joined Weight Watchers and was prescribed medication for acid reflux when her condition became so severe she could not sleep.

Miss Catterall, who works for a social housing group, would even avoid evenings out with friends for fear it would trigger her IBS.

After cutting out gluten and dairy in a desperate attempt to get to the bottom of the problem, Miss Catterall turned to her 40,000 Instagram followers for advice, who suggested she try an at-home food test.

Ten days later, the results revealed she was intolerant to eggs, milk, yeast and beef.

After eliminating these trigger foods from her diet, Miss Catterall claims she felt ‘amazing’ just two days later and is 8.5lbs (3.8kg) lighter three months on. She is now a size 10. 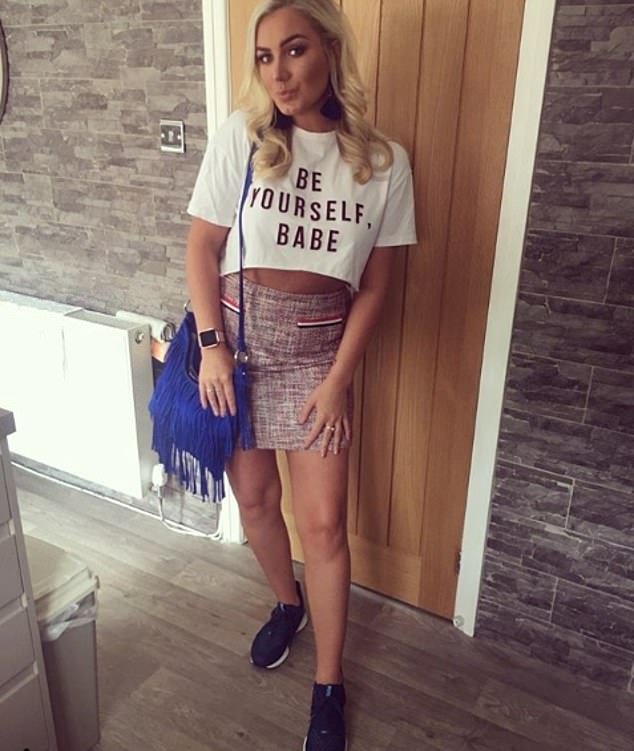 Emily Catterall’s IBS caused her to suffer such extreme bloating that she looked ‘nine months pregnant’. After cutting out gluten and dairy, an Instagram follower suggested she try an at-home food intolerance test. She is pictured after eliminating ‘trigger’ foods from her diet 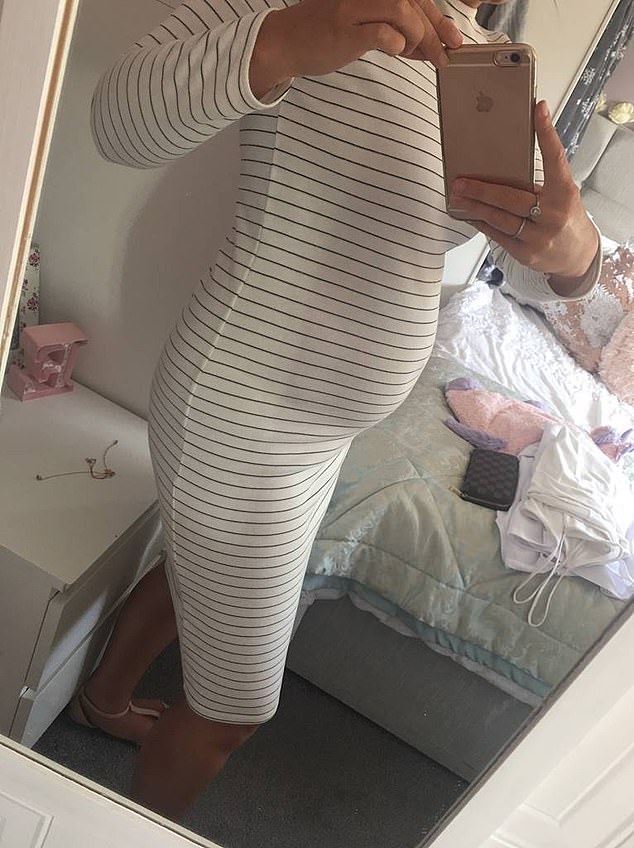 At her worst, Miss Catterall’s bloating caused her to go from a slim size 8 to a size 14. Her agonising condition became so severe she joined Weight Watchers to try and shift the pounds and was prescribed two types of acid reflux medication when she became unable to sleep

‘For about four months I was suffering from really bad stomach aches and a really swollen stomach,’ Miss Catterall said.

‘I went from wearing size eight jeans to looking like I was nine months pregnant.

‘It mostly happened in the afternoon so I knew it was something to do with that I was eating for lunch.

‘It would continue all through the night and I couldn’t sleep. My stomach would constantly be churning and I had discomfort all the time.

‘One night I went out running with my friend and she could hear my stomach churning as I was running along. She told me “that’s not right”.’

Miss Catterall started adjusting her diet to try and find the cause of her discomfort.

‘I was changing my lunch so often to try and find out what was causing the problem that it just became impossible,’ she said.

‘People were telling me to cut out gluten and then to cut out dairy, but sometimes my lunch wouldn’t contain one or the other and I was still having issues every single day.

‘I took the medication the doctor gave me for about a week but decided that I didn’t want to be on medication for the rest of my life. I wanted to find out what was causing it.’ 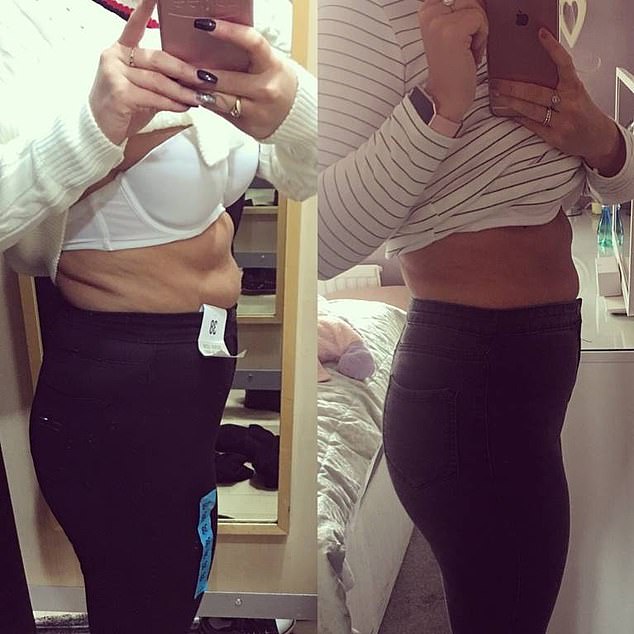 Pictured left before, Miss Catterall can now fit in size 10 jeans (right) and has rejoined Weight Watchers to try and get back to her size 8 frame. She is also now able to go out for dinner with friends without worrying about what mysterious foods may trigger her IBS symptoms

Miss Catterall ordered a YorkTest food intolerance assessment after being recommended it by one of her followers on social media.

‘I had already done some research around food intolerances so decided to give YorkTest a go,’ she said.

‘My results came back within ten days and showed I was intolerant to egg white, egg yolk, cows milk, goats milk, and I had a borderline intolerance to yeast and beef.

‘Even though I thought I had been changing my diet I was still eating a lot of these foods because eggs and milk can be hidden in all sort of things.’

Since eliminating these foods from her diet, Miss Catterall finally feels able to exercise and socialise again. ‘I felt amazing from day two,’ she said.

After initially quitting Weight Watchers in frustration, Miss Catterall has since rejoined and is hoping to get back to her former svelte self.

What is IBS and what are the symptoms?

IBS is a functional disorder of the gastrointestinal tract, characterised by recurrent abdominal pain and discomfort, accompanied by alterations in bowel function.

It is hard to diagnose, as symptoms can vary widely, and needs to be monitored over a period of approximately 12 weeks for a proper diagnosis.

Fortunately, unlike more serious intestinal diseases such as ulcerative colitis and Crohn’s disease, IBS doesn’t cause inflammation or changes in bowel tissue, or increase the risk of colorectal cancer.

Symptoms may be intermittent and can range from severe to mild.

‘I’m back in my size 10 jeans and I’m aiming for my size eights.

‘Not being bloated has made such a big difference to my confidence. I don’t take any medication and, touch wood, I don’t have any discomfort. I’m so happy.’

Miss Catterall has also slowly started reintroducing her ‘problem’ foods back into her diet after consultations with nutritional therapists.

‘I started by reintroducing egg yolk first and then three days later I reintroduced egg white,’ she said.

‘I then tried natural yoghurt, a little bit of milk and I’ve had cheese since.

‘I’m now pretty much eating everything I want to again. I keep waiting for something to trip me up but it’s going really well.

‘I just try not to overeat any of my trigger foods and a lot of the replacements, such as soya instead of dairy, I have enjoyed.’

Miss Catterall is speaking out to urge others IBS sufferers to take a food intolerance test and get to the bottom of their discomfort.

‘It’s so much better to know what is causing problems. It ruined my life daily,’ she said.

‘Now I want everyone else to feel as good as I do. I’m working out and feeling much healthier now. It was all worth it for me.’

Dr Gill Hart, biochemist and scientific director at YorkTest Laboratories, said: ‘Once a food intolerance sufferer understands their trigger foods, and has a period of eliminating them from their diet, there is evidence that they can be reintroduced into the diet in small doses at a later date.

‘Many people are able to reintroduce foods back into their diet once their immune system has “reset”. I’m really pleased Emily is doing so well.’