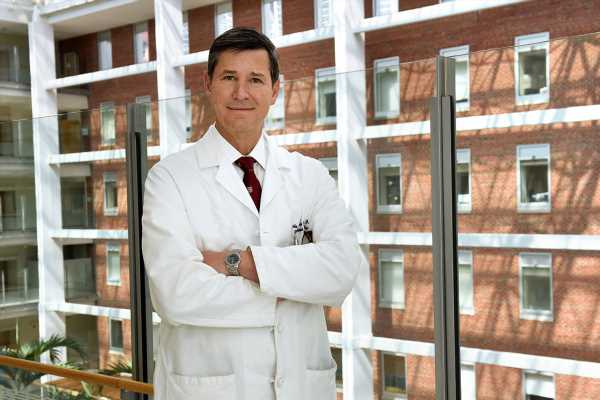 John A. Olson Jr., MD, PhD, noted for his clinical and scientific expertise in endocrine surgical diseases, has been named head of the Department of Surgery at Washington University School of Medicine in St. Louis. He will take the helm July 1.

The position is a homecoming of sorts for Olson, who also will become the William K. Bixby Professor. During the 1990s, Olson completed his postdoctoral research fellowship at Washington University and his surgical training at then-Barnes Hospital, where he rose to chief resident in surgery.

Olson is at the University of Maryland School of Medicine in Baltimore, where he is head of the Division of General and Oncologic Surgery, and the Campbell and Jeannette Plugge Professor of Surgery. He is also vice chair of strategy and finance for the Department of Surgery, founding director of the University of Maryland Cancer Network, and associate director of the Greenebaum Comprehensive Cancer Center, designated as a top U.S. cancer institution by the National Cancer Institute (NCI), part of the National Institutes of Health (NIH).

A recipient of multiple NIH grants, he achieved recognition for his groundbreaking basic science and clinical research on endocrine tumor formation. In particular, his work has led to a greater understanding of how excessive hormone and calcium levels can contribute to tumor development and disease, with a particular focus on how hyperparathyroidism leads to parathyroid neoplasia. His research team reported the first isolation and functional characterization of parathyroid cell subtypes from parathyroid tumors, findings that have enabled the field to hone in on the disease’s development and trajectory.

“Dr. Olson is a superb clinical surgeon, a leading surgeon-scientist, and a respected educator with the kind of leadership experience we want to propel our surgery department into its next era of nation-leading innovations,” said David H. Perlmutter, MD, executive vice chancellor for medical affairs, the George and Carol Bauer Dean of the School of Medicine, and the Spencer T. and Ann W. Olin Distinguished Professor. “We are so fortunate in having attracted John to this critically important position. The School of Medicine has been blessed with a world-leading Department of Surgery for many decades, including groundbreaking innovators in clinical practice, education and science in every area of the surgical disciplines, and we can now expect that to continue under his leadership.”

Since its founding more than a century ago, the Department of Surgery has been a leader internationally in groundbreaking surgical innovations, starting with the first successful removal of a cancerous lung, in 1933. It also is consistently first or second among departments of surgery in NIH funding each year. Its faculty includes members of the National Academy of Science, the National Academy of Medicine and other prestigious organizations, and it has a long history of training leaders in academic surgery.

“I am honored to help lead one of the world’s premier medical sciences institutions,” Olson said. “In addition, my wife, Kim, and I are absolutely thrilled to be returning full circle to St. Louis.”

After earning a bachelor’s degree in cellular and molecular biology from the University of Michigan in Ann Arbor, Mich., he pursued medical scientist degrees at the University of Florida in Gainesville, Fla. He earned a doctorate in pharmacology and experimental therapeutics in 1990 and his medical degree, with honors and distinction in research, in 1992.

Olson completed a postdoctoral research fellowship at Washington University School of Medicine in 1996 and his residency — including a stint as chief resident in surgery — at Barnes Hospital in 1998. He continued his training with a two-year fellowship in surgical oncology at Memorial Sloan Kettering Cancer Center in New York City.

In 2000, he accepted his first faculty position, at Duke University School of Medicine in Durham, N.C., where he rose to associate professor of surgery. In 2012, he was recruited to the University of Maryland as chief of the Division of General and Oncologic Surgery and vice chair of surgery. In the latter role, Olson oversaw surgical education programs, including resident research. He is known as a hands-on mentor to numerous residents as well as medical and graduate students.

He has received numerous awards and accolades and has served on more than a dozen national committees. He has been an associate section editor for the journal Annals of Surgical Oncology, and has held leadership roles in the former American College of Surgeons Oncology Group (now part of Alliance for Clinical Trials in Oncology) and the American Association of Endocrine Surgeons.

Olson succeeds Timothy J. Eberlein, MD, who has led the Department of Surgery for 24 years.

“I want to take this moment to celebrate Dr. Eberlein,” Perlmutter said. “He has been absolutely brilliant in guiding the department to its position as a global leader and is respected in every part of the academic surgery community. On the Executive Faculty, he has also played a key role in every aspect of how our medical school contributes to the region and our society at large. We are lucky that Tim will remain within the leadership of the school as director of the Alvin J. Siteman Cancer Center, senior associate dean for cancer programs, and the Spencer T. and Ann W. Olin Distinguished Professor.”