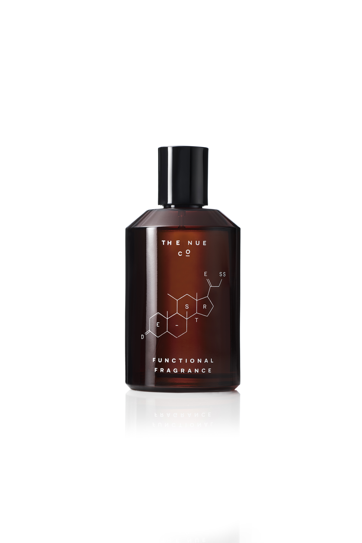 There's a new fragrance concept further blurring the lines between wellness and beauty.
The Nue Co., the wellness brand known for its ingestible supplements, is releasing an anti-stress supplement in fragrance form. Created by Frank Voelkl of Firmenich, Functional Fragrance was inspired by the practice of aromatherapy. The product was made using data collected by the University of Geneva.
"When we looked at what was the science behind aromatherapy, we saw that there’s a huge amount of research that connects the olfactive system with our corpus callosum," said Jules Miller, the Nue Co.'s founder and chief executive officer. "The idea that smelling something could impact the way you feel, we thought that was a really interesting concept. We approached Firmenich and discussed the idea with them, connecting the idea of smell and science and function. They were thrilled that a brand wanted to connect those three things."
Functional Fragrance, available now on the Nue Co.'s web site, retails for $155 for 100 ml. and $40 for a travel-size 10 ml. bottle. The product is meant to be applied to pressure points during moments of stress and accompanied by a breathing exercise. The scent is a blend of green cardamom, iris, palo santo, violet and cedarwood — a combination Miller and her team settled on after reviewing the University of Geneva study.
The Geneva Emotion and Odor Scale study, commissioned by Firmenich, involved taking MRI scans of participants' brains to identify which areas of the brain light up when people feel relaxed and calm. The MRI scans were then matched to different scents, which varied from breast milk to lavender to the green cardamom that appears in the final product.
Since its launch in February 2017, the Nue Co. has focused on expanding its direct-to-consumer strategy. About 70 percent of its revenue comes from digital, with subscriptions making up 50 percent of that. The average order value is $200, and the rate of repeat purchase is 50 percent. Wholesale partnerships make up about 20 percent of the brand's revenue.
Fragrance is a new area of focus for the Nue Co., but according to Miller, the brand won't be adding to the category until the data proves a demand for it. She does, however, see functional fragrance as a potential area of growth for wellness, which she described as "bleeding" into beauty and fashion.
"What wellness means to us is any means or any practice that makes you feel better physically but also emotionally," she said. "Wellness is taking care of not only yourself, but the planet that you live in. It started bleeding into beauty — one of the biggest trends within beauty is looking fresh-faced and healthy — and it’s bled into fashion, which is the idea of completely sustainable garments. It's also bleeding into things that have been spearheading the category, which is healthy eating and fitness. When you look at the wellness industry as a whole, it’s growing at a rate of 12 percent year on year, where the global economy has dropped about 3.6 percent. So wellness is accounting for 5 percent of the global economy, which is really interesting. It’s only a matter of time that it bleeds into almost every category, but particularly every category within beauty."
Source: Read Full Article