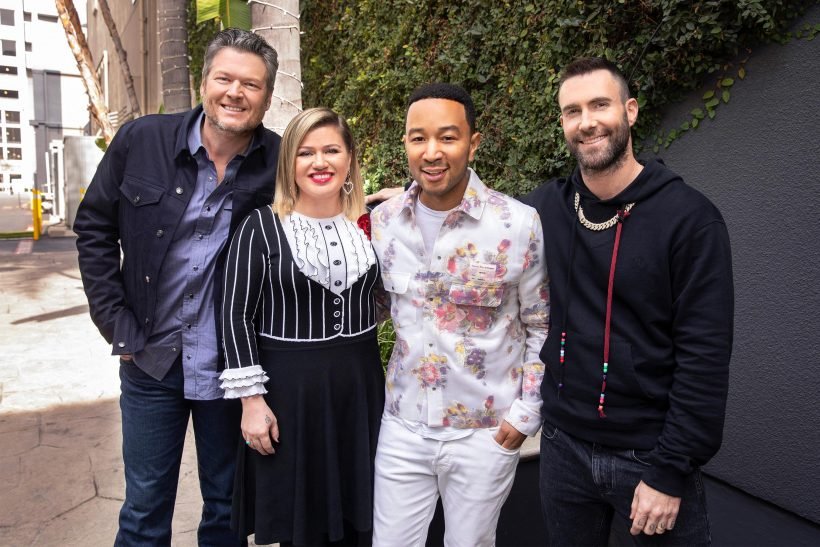 Adam Levine usually gives Blake Shelton a hard time on just about everything. But there’s one thing the Maroon 5 frontman completely trusts the country star with: his kids.

“I don’t trust him really in any way except with that kinda stuff. He’s good with kids,” Levine, 39, told PEOPLE exclusively on set of The Voice ahead of the premiere.

“If I’m in the room, [kids] are on my arms. They’re hanging off my legs and punching my stomach because it jiggles,” says Shelton. “It’s entertaining to them. You can always find the kids in the room if I’m there.”

Returning coach Kelly Clarkson and newcomer John Legend told PEOPLE one of the biggest reasons they signed up for The Voice was so they could spend quality time with their families.

“You get to work in Los Angeles where you live, and I get to see my kids all the time. It’s actually quite nice,” he adds.

Clarkson’s kids — son Remington “Remy” Alexander, 2½, and daughter River Rose, 4½ — also love visiting Mom on set, but mostly because they get to play with their pals.

Carson Daly, who has hosted the show since the first season, is dad to son Jackson James, 10 next month, plus daughters London Rose, 4½, and Etta Jones, 6, while Shelton’s girlfriend Gwen Stefani has three sons: Apollo Bowie Flynn, 5 on Thursday, Zuma Nesta Rock, 10, and Kingston James McGregor, 12.

“My kids love coming to set not to see me, but to see Carson’s kids or Gwen’s kids ’cause they go to school together,” Clarkson, 36, tells PEOPLE, joking, “I’d love to think they come to see me, but they don’t!”

Considering their packed schedules, it’s just nice for the superstars to be able to tuck their kids in at night after a long day of filming.

As Legend tells PEOPLE, “It’s nice to be close to home. [It’s a] quick commute and I’m there when they go to bed most nights.”

The new season of The Voice premieres Monday at 8 p.m. EST on NBC.