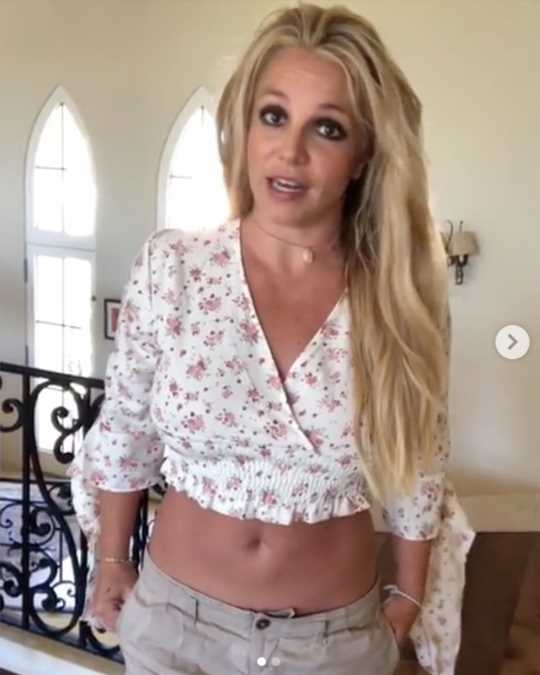 Britney Spears is giving her fans a peek at the produce-filled lineup of foods she says helped her lose 4 pounds.

The “Piece of Me” singer, 37, has been open about her exercise habits and desire to lose weight on social media and said in a video Tuesday that she’s been relying on an extensive chart to help her out.

“Okay, so I just lost the 4 pounds that I’ve been wanting to lose, but now these are the fruits and vegetables that I eat to keep it all off,” Spears said in an Instagram video that featured her showing off her toned stomach in a quarter-sleeve crop top.

She also included an extensive chart that offered different groups of foods recommended to help with various conditions, including arthritis, high blood pressure, and diabetes.

Spears wrote in her caption that she suffers from weak eyes, stress, asthma, and headaches and that the chart “has helped me with so much of those problems …. and my weight !!! Whoop whoop.”

The chart’s origin is unclear, though many of its recommendations are backed by doctors and scientific studies.

For example, the “eyes” column lists carrots and celery, and carrots have long been suggested as a way to improve eyesight thanks to beta-carotene, an antioxidant that the body converts into vitamin A.

Those dealing with stress, meanwhile, are told to eat bananas, strawberries and pears, with strawberries’ vitamin C having been shown to reduce the effects of anxiety, according to Psychology Today.

Spears has been heavily focused on her health in recent months since checking out of an “all-encompassing wellness treatment” facility in April.

She shared a workout video last month that revealed her favorite exercise routines and explained she’d been working hard to lose weight.

“I’ve been working really hard to loose [sic] weight …. and for me 3 pounds is like 7 pounds it’s a lot,” she wrote in the caption.

“I don’t like doing too much cardio,” she added. “My body has muscle memory, cus I use it be [sic] gymnast and I can bulk up …. so I like isolated movement. The key to my workout is repetition, but that gets boring so I have a booklet I’ve made with all my favorite exercises. I usually wear headphones …. music takes me away .”

The video came after the star accused paparazzi of altering photos of her in a bathing suit to make her “look 40 pounds bigger.”

“A lot of fans in our world today, they always are subject to really criticize people and say that the pictures and videos that they’re posting are either not on time or they’re fake. But no one ever really asks, ‘Are the paparazzi pictures fake, and do the paparazzi people do stuff to the pictures and is the news really real?’” the pop star said in a since-deleted video.

“It’s a conspiracy theory that I’m actually interested in,” she added. “Yesterday, I went swimming. I look like I’m 40 pounds bigger [in the photos] than I am today. This is how I am right now, and I’m skinny as a needle. You tell me, what is real?”