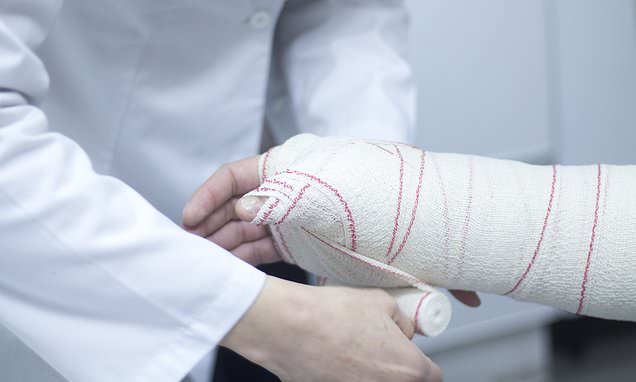 Clunky plaster casts really may be the best way of treating broken bones, a study suggests.

Patients who suffer fractures often complain about moulded casts, saying they are uncomfortable and smell.

But the alternative — using metal pins to hold broken bones in place while they heal — is no more effective, doctors say.

Trauma experts sought to find the best method for treating a broken wrist, one of the most commonly broken bones in both the UK and the US.

While the metal pin method, known as K wires, is the ‘routine’ treatment option, it is more expensive than plaster casts, which can cost as little as £9.

The procedure also requires surgery, meaning patients face all of the standard risks of an operation.

Experts at Oxford University analysed results of both methods on a group of 500 patients who broke their wrists.

Around half of the volunteers were given traditional plaster casts, while the others underwent surgery.

Over 12 months, patients were quizzed about how their injury was healing.

They’re uncomfortable, itchy and can even give off an unpleasant smell – but casts for broken bones may become a thing of the past.

A US start-up firm has created a lightweight, breathable and waterproof alternative that can be worn in the sea, bath or pool.

Cast21’s wide mesh sleeve is slipped onto a patient’s wrist and then filled with liquid resins, which hardens into shape within minutes.

Patients with traditional plaster casts are unable to clean underneath. It’s unhygienic and could cause skin sores and infections, experts say.

But the alternative device, which comes in a range of vibrant colours, can makes the healing process ‘far more pleasant’, say the designers.

It also doesn’t need to be hacked off with a saw like standard casts, which can be a terrifying experience for children. The cast can’t yet be bought.

They were asked questions about whether they were still in pain, whether they could use their wrist, and how their quality of life was now.

Patients also underwent checkups at both the three- and six-month mark to check if there were any complications.

The academics, who published their findings in the British Medical Journal, found no statistical difference in outcomes between the two groups.

Plaster cast patients scored their healing as 21.2 on average after 12 months, while the surgery group gave a rating around 20.7.

This means that the cheaper and surgery-free plaster method was essentially just as effective as the metal pins for healing a broken wrist.

However, the researchers did find an eighth of patients in the plaster cast cohort did require follow-up surgery to ensure their bones were healing correctly within the first six weeks of treatment.

This compared to just one patient in the metal pin group of patients.

But Professor Matthew Costa, lead researcher, said the study’s recommendation to use a plaster cast in the first instance still stood.

The orthopaedic trauma expert said: ‘Cast treatment avoids the expense and risks of surgical fixation for seven out of eight patients.

‘However, careful follow-up is needed.

Plaster casts are often made from plaster of Paris, fibreglass or polyester, surrounding some padding and the dressing which goes over the skin.

They are usually removed with a combination of tools including specially designed saws and scissors by medial professionals.

Some firms are attempting to develop new types of casts using waterproof resin which removes some of the downsides of plaster casts, which can be tricky to bathe in and lead to unpleasant smells and potential skin problems.

Study participants had an average age of 60, and 83 per cent of them were women.

All of them had broken their wrist sometime between January 2017 and March 2019.

Broken wrists are a common injury among elderly women in the UK, with one in 20 having had this injury at some point in their lives by their 80s with this number rising to one in 10 when they reach 90.

The injury is also though to account for a tenth of all broken bones in the US.