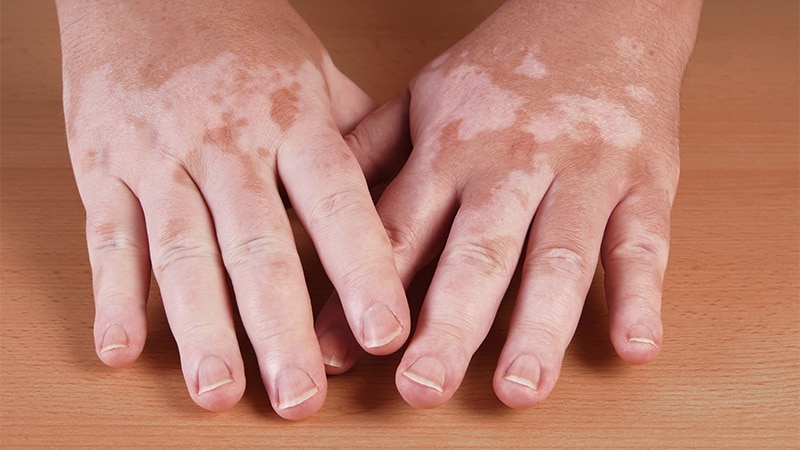 For the first time, patients with vitiligo who have long lived with patches of skin that are without pigment can now have even skin tones on their faces and other bodily regions with a US Food and Drug Administration (FDA)-approved, easy-to-use topical treatment.

In July, a cream formulation of ruxolitinib (Opzelura), a Janus kinase (JAK) inhibitor, became the first repigmentation treatment approved by the FDA for nonsegmental vitiligo, the most common form of the disease.

Topical ruxolitinib was first approved in September 2021 for atopic dermatitis, and dermatologists are already writing prescriptions for its new vitiligo indication.

“The FDA approval of ruxolitinib for repigmentation of vitiligo is historic and groundbreaking,” Seemal Desai, MD, a dermatologist with the University of Texas Southwestern Medical Center, Dallas, told Medscape Medical News.

The news brings hope to patients 12 years and older who suffer from the psychosocial effects of the disease, which is estimated to affect 1.9 million to 2.8 million adults in the United States.

The announcement followed FDA approval a month earlier of another dermatologic milestone ― an oral JAK inhibitor, baricitinib, which became the first treatment for patients with alopecia areata.

For Desai, the ruxolitinib news is personal. His brother, also a physician, has lived a lifetime with vitiligo. His family experience, Desai said, showed him “what a disease like this can do to a person psychologically.”

Seemal Desai said his early exposure helped lead to his own decision to dedicate his career to pigmentary diseases.

His brother won’t personally benefit from the cream because his skin has been completely depigmented and repigmentation is not of interest to him, Desai said. But both brothers are excited as physicians. “It’s really quite an emotional moment,” he said.

Getting the News to Patients

As dermatologists introduce the topical treatment to patients, common questions center on why this cream is different and whether it is safe.

He summarized some key findings.

“If patients have involvement on the face, trunk, or extremities, the data show that about half the patients at 52 weeks will get half or more of their pigment back,” he told Medscape Medical News.

Results for the face alone are even better. “Half the patients will get 75% or more pigment back in the face,” Rosmarin said.

In addition, analysis of subgroups shows benefit for all patients. “Patients seem to respond similarly well across all subgroups ― across gender sex, age, ethnicity, and race,” Rosmarin said.

However, anatomic region matters, he pointed out. Skin of the head and neck responds the best, followed by skin of the trunk and extremities. The hands and feet are the most difficult to repigment because there are few hair follicles, which help enable repigmentation.

He added that it’s important to understand patients’ goals, and dermatologists shouldn’t assume that all who have vitiligo will want to undergo repigmentation. They may be interested in the new treatment but may not want it for themselves, he explained.

Patients may ask about the boxed warning on the label that lists risk of heart attack, stroke, cancer, infections, blood clots, and death. Dermatologists can explain that that warning pertains to the whole JAK class and was based on patients with rheumatoid arthritis, Rosmarin said.

He added, “We didn’t see a signal for heart attack and stroke for patients using the topical. But it’s still important to discuss the label as the FDA states it.”

There are two main side effects, Rosmarin said: acne (about 6% of treated patients get it, and it’s usually mild) and application-site reactions. “Luckily, the medication has a tendency not to sting or burn, which is not the case with some of our other treatments. It’s very well tolerated,” he said.

Patients should also know that repigmentation can take time, because initially, the immune system is directed to calm down with treatment, and then pigment must travel back to the affected sites.

Some patients may have a response in as early as 2–3 months, and others need more time, Rosmarin said.

Treatment responses among adolescents have been particularly good. Responses regarding the skin of the face have been similar to those of adults. “However, on the body, they respond even better,” Rosmarin said. “About 60% achieve 50% or more repigmentation on the whole body.”

It’s important that ruxolitinib has been approved for persons aged 12 years and older, he said, because “about half the patients will develop vitiligo by the age of 20.”

FDA approval will help with reimbursement for the expensive treatment.

The label indicates that patients should not use more than one 60-g tube a week. Currently, the out-of-pocket cost for one tube can be close to $2000, according to GoodRx.

Raj Chovatiya, MD, PhD, assistant professor of dermatology and director of the Center for Eczema and Itch at Northwestern University Feinberg School of Medicine in Chicago, said that in recent years, vitiligo patients, aware that their condition could be treated by JAK inhibitors, have been paying out of pocket at compounding pharmacies, which take oral versions of the medication and compound them into topical formulations.

Unlike baricitinib, which is used to treat severe alopecia areata, and other oral JAK inhibitors, testing for TB and hepatitis is not required for initiating treatment with ruxolitinib, so no delay is necessary, Chovatiya said.

He noted, however, that patients with vitiligo may have given up on effective care after experiencing little or no improvement with topical corticosteroids, phototherapy, or topical calcineurin inhibitors.

“They end up losing steam, are less motivated on therapy, and are lost to care,” he said.

Dermatologists, he said, may need to proactively find these patients and tell them the good news. “Now that we have really good targeted therapeutic options, it’s really up to us to figure out how to bring these people back to the clinic and educate them,” Chovatiya said.

Two big questions are how long people will need to continue using ruxolitinib cream and whether depigmentation will recur if people stop using it.

Another aspect of therapy being studied is whether the cream will be even more effective in combination with other treatments.

“The main combination we think about is ruxolitinib with phototherapy ― a light treatment ― because light could stimulate those pigment cells,” Rosmarin said,

He noted that light therapy was included in phase 2 testing and that patients did respond. “What we need and what’s planned is a larger study looking at the combination to see whether it is synergistic or not. The longer patients use the cream, the more benefit we see,” Rosmarin said.

Marcia Frellick is a freelance journalist based in Chicago. She has previously written for the Chicago Tribune, Science News, and Nurse.com, and was an editor at the Chicago Sun-Times, the Cincinnati Enquirer, and the St. Cloud (Minnesota) Times. Follow her on Twitter at @mfrellick.