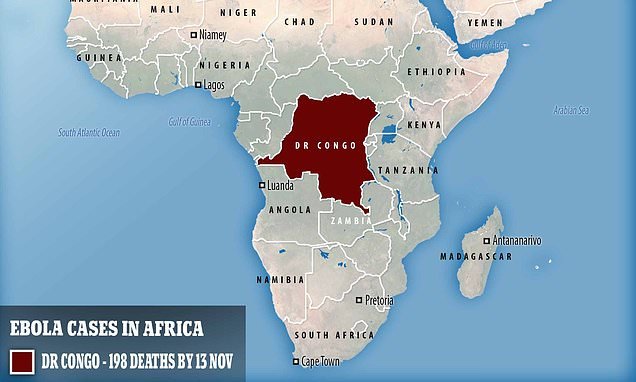 The Ebola outbreak in the Democratic Republic of the Congo is the worst to ever rock the country since the horror disease was discovered there in 1976.

Health officials in the African nation say they have never seen such a fierce outbreak. Figures show the current one has infected at least 319 people and killed 198.

And, unusually, children are being badly affected because they’re catching the virus while in medical clinics for other reasons, experts say.

‘No other epidemic in the world has been as complex as the one we are currently experiencing,’ said Dr Oly Ilunga Kalenga, the DRC’s health minister.

Armed groups have attacked, kidnapped and killed medical staff trying to combat the outbreak, equipment has been destroyed, making it difficult to help victims. 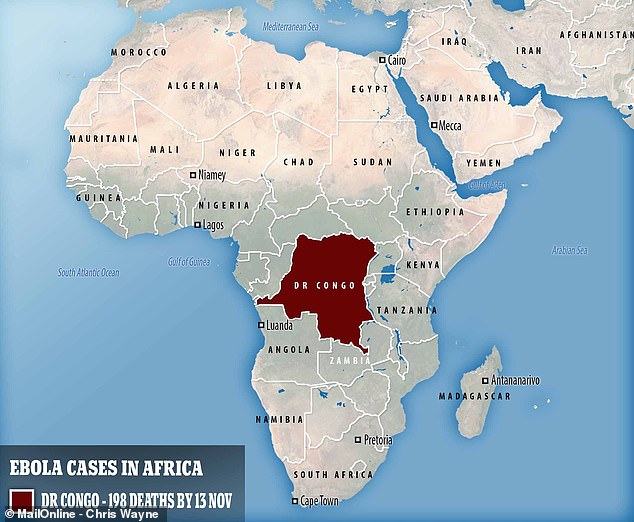 Ebola has now killed at least 198 people in the Democratic Republic of the Congo, making it the worst outbreak ever in the central African country, the government says

The outbreak is happening in the Ituri and North Kivu provinces in the north east of the African nation, which borders Uganda and South Sudan.

Having started on August 1, it is the 10th outbreak since the disease, which causes extreme fever, bleeding and diarrhoea, was first discovered 42 years ago.

‘This epidemic remains dangerous and unpredictable, and we must not let our guard down,’ said Dr Kalenga.

‘We must continue to pursue a very dynamic response that requires permanent readjustments and real ownership at the community level.’

He added: ‘Since their arrival in the region, the response teams have faced threats, physical assaults, repeated destruction of their equipment, and kidnapping.

‘Two of our colleagues in the Rapid Response Medical Unit even lost their lives in an attack.’

Dr Kalenga said teams responding to the outbreak are violently attacked, on average, three to four times a week.

In October, militants killed 11 civilians and a soldier in Beni, a city with a population of around 230,000 people where the outbreak is thought to have started.

Among the 198 people who have died in the outbreak, 163 of them were confirmed to have had Ebola, with 35 of them ‘probable’ cases.

Around 100 people are thought to have survived the incurable virus. 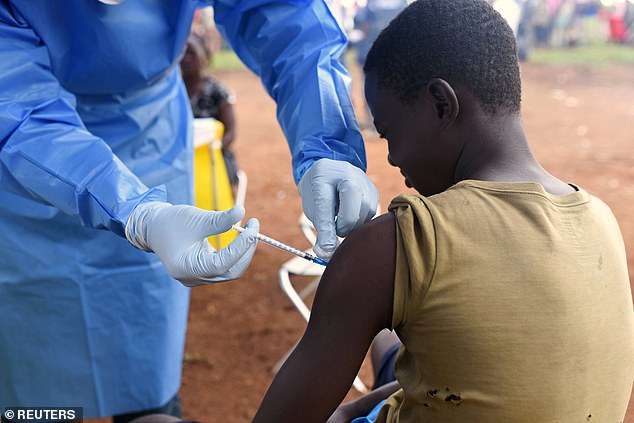 A Congolese health worker administers an experimental Ebola vaccine to a boy who had been in close contact with a confirmed sufferer in Mangina, North Kivu

Despite facing resistance from people who don’t want health workers treating them, the government has managed to vaccinate more than 27,000 people.

Those who are known to have come into contact with others who had the disease have been targeted by the vaccination programme.

The head of UN peacekeeping operations vowed this week to do more with DRC’s government to help improve security in the country’s east.

HAS THE DRC HAD AN EBOLA OUTBREAK BEFORE?

DRC escaped the brutal Ebola pandemic that began in 2014, which was finally declared over in January 2016 – but it was struck by a smaller outbreak last year.

Four DRC residents died from the virus in 2017. The outbreak lasted just 42 days and international aid teams were praised for their prompt responses.

The new outbreak is the DRC’s tenth since the discovery of Ebola in the country in 1976, named after the river. The outbreak earlier this summer was its ninth.

Health experts credit an awareness of the disease among the population and local medical staff’s experience treating for past successes containing its spread.

DRC’s vast, remote geography also gives it an advantage, as outbreaks are often localised and relatively easy to isolate.

The majority of the Ebola cases have been in the city of Beni – at least 120 confirmed cases have occurred there.

And at least 30 of these – 27 of them fatal – have hit children under the age of 10, officials revealed last month, meaning children are dying at an unprecedented rate.

Jessica Illunga, a spokesperson for the health ministry in DRC said in October: ‘There is an abnormally high number of children who have contracted and died of Ebola in Beni.

‘Normally, in every Ebola epidemic, children are not as affected.’

Dr Peter Salama, emergency response chief at the World Health Organization (WHO), last month warned the current Ebola outbreak would only get worse.

The combination of rebel violence and pre-election unrest is creating a ‘perfect storm’ for an even worse epidemic, he said.

Refugee workers were even forced to evacuate Beni due to a deadly raid that left more than a dozen locals dead.

Fears and misconceptions about the virus are also being exploited by politicians ahead of the DRC’s December election, which is causing the public to lose faith in health workers, according to Dr Salama.

Last month, Ebola was found to be responsible for the death of a woman in Butembo, which has a population of around 1.4 million.

In response, Dr Salama said ‘no-one should be sleeping well tonight around the world’.

That pandemic was officially declared over back in January 2016, when Liberia was announced to be Ebola-free by the WHO.

A team of international researchers were able to trace the pandemic back to a two-year-old boy in Meliandou – about 400 miles (650km) from the capital, Conakry.